by Antoinette Brock: “Kundalini yoga teaches you how to understand your relationship with the world… 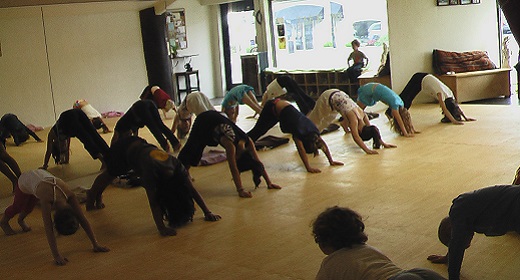 We can say a thousand times, “We are one.” But saying is not believing and believing it, is not actualizing it in your life. What’s missing as the cultures have evolved to the state where we have, is a technique to being able to get back or to access that humanity.” Kundalini and self-awareness teacher Krishna Kaur who has been practicing what she calls her “absolute dogmatic training,” for 45 years, is founder of the nonprofit Y.O.G.A for Youth.

Y.O.G.A for Youth provides underserved youth with the social and emotional support necessary to be healthy individuals both mentally and physically. The comprehensive curriculum addresses areas such as behavioral stability, self-esteem, scholastic aptitude and physical health and shows up for students in a way No Child Left Behind did not.

Y.O.G.A for Youth has seen quite a bit of fluctuation due to funding and was initially built around Upward Bound. As a part of one of three federally funded programs known as TRIO, Upward Bound’s aim was to offer better opportunities for urban youth to attend college and was successful in reaching the youth who needed its resources most. The TRIO programs such as Upward Bound however were negatively affected when the No Child Left Behind law was passed. An unjust amount of emphasis was placed on standardized tests that forced teachers who were afraid of losing their jobs and schools afraid of losing funding, to “teach to the test” causing the social, emotional and creative aspects of the child to be neglected. As Kaur put it “when President Bush, instituted his No Child Left Behind program he cut out all the stuff that gave these kids a chance to be human.”

At first glance the students at the Watts Learning Center Charter School looked like typical eighth grade students in a P.E class. All were dressed in classic school paraphernalia and patiently waiting, some more than others, from a cue from their instructor. Instructor Ed Tellis, engaged the young men very quickly and began class with each student saying an affirmation beginning with “I am” and the class repeating “You are _______.”

Following the affirmations students began chanting in unison. The powerful yet controlled tone neutralized the energy in the room, allowing students who had all arrived to class with their own set of challenges, to unite and move forward in the practice together. It was clear that role of the instructor was not solely to reinforce the different poses but through careful guidance and choice of words to use Kundalini to tap into students’ self-awareness, heart and consciousness.

At one point in class the young men were asked what they’ve noticed about themselves since taking yoga. Students responded by saying, “I get angry less easily,” “I am more focused” and “My grades have improved.” The compassion and understanding with which Kaur operates the Y.O.G.A for Youth nonprofit are overwhelmingly impressive and admirable at best. The philosophies and teachings passed down to Kaur by Yogi Bhajan prove extremely valuable to these kids who she says, “come with a level of sensitivity and spiritual intuition,” While she sees promise in the future of our educational system she does admit to this tricky transitional time we are in.

“There’s a lot more breakthroughs from the traditional more static ways of looking at things and just accepting things as they’ve always been done for years and years yet our educational system in integral ways is still locked into a certain approach to things.” As we grapple with old, ineffective teaching practices, she makes it clear that, “they are not being nourished, in the way that they have come here to be nourished. We’re [adults] just not showing up in the way that they need. And so having the chance to interact with them and give the wisdom, and the way to think about themselves you know? Not blaming anybody for anything, take responsibility, there are no victims here. Yes, the world is unfair but you still have to relate to it and how you relate to it determines how it’s going to serve you.”

Kaur makes no excuses for the students in her program whether in a school in Watts, California or one of the juvenile detention centers where the nonprofit is also involved. Instead she seeks to empower and enable students to think, communicate and have healthy relationships not just with those around them but most importantly, with themselves.