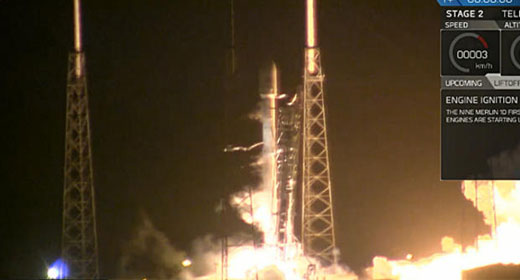 In a significant space “first,” the Falcon 9’s first stage fell back into the atmosphere and pulled off a powered landing at the Cape Canaveral Air Force Station, settling to a smooth tail-first touchdown in a convincing demonstration of reusability, a key requirement for lowering commercial launch costs.

In a scene resembling a launch video running in reverse, the booster quickly dropped out of a cloudy sky atop a jet of flame from one of its Merlin 1D engines, heralded by twin sonic booms that rumbled across Florida’s Space Coast. Cheers erupted in company headquarters in Hawthorne, California, as the stage settled to a smooth touchdown. 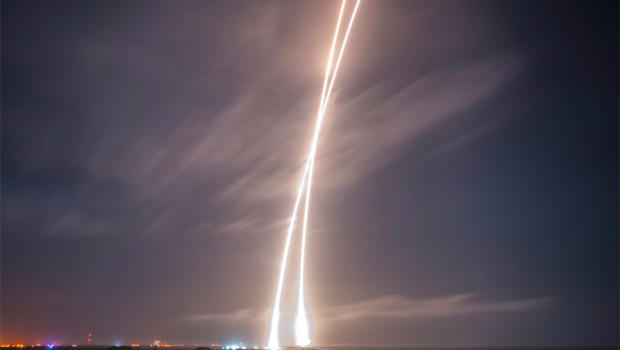 In another first, the Falcon 9 used colder, denser-than-usual liquid oxygen and kerosene propellants, a significant upgrade allowing the booster’s nine first-stage engines to generate more power, increasing their combined liftoff thrust from 1.3 million pounds to 1.5 million, or 170,000 pounds of thrust per engine.

The launch, first-stage landing and satellite deployments all appeared to proceed without a hitch, a welcome success for a company returning to flight after a disheartening failure.

“Everything we’ve seen thus far in the mission appears to be perfect,” SpaceX founder Elon Musk said in a conference call with journalists. “The satellites were deployed right on target and the Falcon 9 booster came back and landed. Looks like almost dead center on the landing pad. … As far as we can see right now, it was absolutely perfect. We could not have asked for a better mission.”

Running three days late because of problems completing an engine test firing last week and then a scrub Sunday, the 229-foot-tall Falcon 9 thundered to life at 8:29 p.m. EST (GMT-5) and quickly climbed away from launch complex 40 at the Cape Canaveral Air Force Station.

Initially climbing straight up atop a brilliant jet of exhaust from its nine first-stage engines, the slender rocket arced away to the east and accelerated out of the dense lower atmosphere.

The first stage engines fired for about two minutes and 20 seconds and shut down, followed seconds later by stage separation. The single Merlin 1D engine in the rocket’s second stage then ignited to continue to push to orbit, burning for about eight minutes to lift the 11-satellite payload out of the discernible atmosphere.

Five minutes after that, the Orbcomm satellites were deployed one at a time in a preliminary 398-mile-high orbit tilted 47 degrees to the equator.

A major highlight of the mission was the return to Earth of the spent first stage. Just after separation two minutes and 24 seconds into flight, the stage flipped around for the first of three rocket firings to slow its forward motion, dropping back into the atmosphere tail first.

The booster’s flight computer was programmed to head for a landing at an abandoned Atlas ICBM launch complex at the Air Force station. SpaceX provided live video of the landing, showing the rocket’s dramatic descent to touchdown.

The view from nearby Port Canaveral, where reporters were gathered to watch the launch, was as unfamiliar as it was spectacular as the rocket dropped toward Earth, one of its Merlin engines firing with brilliant fury all the way to the pad. Settling to touchdown on four deployed landing legs, the rocket stage looked in remarkably good condition given its fiery ascent and equally fiery descent.

Before Monday’s flight, SpaceX had carried out two attempts to land a Falcon 9 first stage on an off-shore barge, demonstrating the booster’s ability to autonomously slow down, re-enter the atmosphere and descend to a powered, tail-first landing.

In the first attempt, a hydraulic system failure resulted in a crash landing on the barge. In the second, the booster managed to set down on the barge but tipped over and exploded.

In both cases, the rocket’s control software worked properly and left little doubt SpaceX could get a Falcon 9 first stage back to a landing target. But the Air Force, which manages the Florida launch site, had to be convinced a returning booster posed no credible threat to life or property.

And this time around, the system worked, a major milestone in Musk’s drive to dramatically reduce launch costs by recovering, refurbishing and relaunching spent rocket stages.

Amazon-founder Jeff Bezos agrees with that approach. His New Shepard sub-orbital rocket, intended to boost passengers to the edge of space, recently carried out a successful landing in Texas after an unpiloted test flight.

But sub-orbital rockets experience far less stress and much lower velocities than boosters taking off on flights to orbit, and getting a Falcon 9 stage safely back to Earth is a much more daunting technological challenge.

The landing, however important to SpaceX’s long-range plans, was a purely secondary objective. The primary goals of the flight were to test the new rocket and to deploy the Orbcomm satellites, each weighing about 380 pounds. The satellites are part of a growing constellation of Orbcomm spacecraft that provides data relay services.

The company launched six satellites on a previous SpaceX mission, although one failed after reaching orbit. The new satellites will join an operational constellation of 34 spacecraft used to track vehicles, aircraft, ships at sea and global shipments of a variety of products, along with providing messaging and data relay services.

Orbcomm CEO Marc Eisenberg told Spaceflight Now that his company has enjoyed a good relationship with SpaceX and that he had no qualms being the first customer on the upgraded Falcon 9.

“Return-to-flight missions also typically have better success rates than standard missions, but you’re also aware that you need your backup plans just in case, and there’s a reason to buy insurance,” he said.

The upgraded Falcon 9 is five feet taller than the previous version and features an extended “interstage” section separating the first and second stages, along with an improved stage separation system. The second stage propellant tanks were extended and its single Merlin 1D engine features a longer nozzle and can generate 210,000 pounds of thrust in vacuum.

All 10 engines burn refined kerosene fuel, known as RP-1, and liquid oxygen. Liquid oxygen has a temperature of around minus 298 degrees Fahrenheit, but during tests last week Musk tweeted the oxygen on board the upgraded rocket is cooled to minus 340 degrees. The RP-1, which normally is stored at a room temperature 70 degrees, is chilled to 20 degrees. The lower temperatures increase the propellants’ density.

A rocket engine’s thrust is directly proportional to the rate at which propellants are consumed and expelled. By “densifying” the Falcon 9 propellants, more fuel can be stored and pumped through the engines, increasing performance.

While earlier rockets, including the Titan 2 booster used to launch NASA’s Gemini spacecraft in the 1960s, have used propellant cooling to increase density, and thus engine performance, the upgraded Falcon 9 is believed to be the first utilizing super-cooled cryogenic propellant.

“One of the things we’re doing for the first time, the first time I think anyone’s done it, is deeply cryogenic propellant,” Musk said last week at the fall meeting of the American Geophysical Union in San Francisco. “We’re sub-cooling the propellant, particularly the liquid oxygen, close to its freezing point, which increases the density quite significantly.

“The thrust is higher, we’ve improved the stage separation system, we stretched the upper stage of the rocket to add more propellant to that. There are a number of other improvements in electronics. It’s a significantly improved rocket from the last one.”

The launching was a critical milestone for SpaceX.

Along with clearing the way for additional downstream flights, including launch of a NASA environmental satellite in mid January, a successful flight Monday also was expected to help pave the way for SpaceX to resume space station cargo delivery flights in early February. SpaceX holds a $1.6 billion contract with NASA to deliver some 44,000 pounds of cargo and supplies over 12 flights.

After a lengthy failure investigation, SpaceX took action to make sure no defective struts could find their way into downstream rockets. At the same time, engineers pressed ahead with the modifications allowing the rocket to generate additional launch power through the use of densified liquid oxygen.

Given the failure in June, NASA managers told Musk the agency did not want to resume SpaceX resupply flights until after the upgraded rocket had flown at least once. That requirement has now been met.

Bill Harwood has been covering the U.S. space program full-time since 1984, first as Cape Canaveral bureau chief for United Press International and now as a consultant for CBS News. He has covered more than 125 shuttle missions, every interplanetary flight since Voyager 2’s flyby of Neptune, and scores of commercial and military launches. Based at the Kennedy Space Center in Florida, Harwood is a devoted amateur astronomer and co-author of “Comm Check: The Final Flight of Shuttle Columbia.” You can follow his frequent status updates at the CBS News Space page.