Dr. Mark Mincolla who coined the term “Food is medicine” has released his new book on healthy dieting and disease prevention through whole food eating. 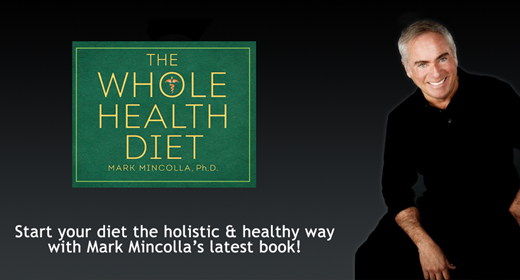 “This is who saved my brother-in-law’s life when he was diagnosed with non-alcoholic cirrhosis of the liver. When doctors said there was nothing they could do, Mark put him on a special diet and his liver counts came down to normal range! He wouldn’t be here today if it wasn’t for him! I just bought his book. Can’t wait to see what he has to share!!!” – Client Review

Americans are avid dieters, with nearly one-third of our entire nation taking up dieting every year. Yet, according to The Food Addiction Institute, diets have a success rate of between ten and thirty percent. Dr. Mark Mincolla, natural health-care practitioner and author of THE WHOLE HEALTH DIET: A Transformational Approach to Weight Loss claims that this high failure rate is due to a flawed approach to dieting that focuses only on physical changes. What dieters need, Mincolla argues, is a more holistic approach that addresses the root causes of weight gain: our emotional, mental, and spiritual needs.

In THE WHOLE HEALTH DIET, Mincolla not only teaches readers how to tackle emotional eating; he also shows them how to develop and maintain their own personalized, energy-calibrated nutrition plan. Based on the notion that each individual’s metabolism reacts differently to various foods, Mincolla shows dieters how to electromagnetically test themselves for metabolic food intolerances. This highly individualized approach reveals truths that fly in the face of commonly held notions. Dieters will discover a number of surprising revelations, including:

Also featuring assessment tools, exercises, and recipes, THE WHOLE HEALTH DIET is a revolutionary approach to an undertaking that is usually bound for failure. Written with compassion and wisdom, this unconventional title reveals proven methods that, while not yet mainstream, have already helped thousands transform their lives.

Mark Mincolla, Ph.D. is a natural health care practitioner who has transformed the lives of thousands of people over the past thirty years with food. He holds a Ph. D. in Health and an M.A. in Nutrition and has studied extensively with recognized Masters of Eastern Medicine, spirituality and healing. Like Hippocrates, the father of medicine, who said, “Let food be thy medicine and medicine be thy food,” Dr. Mincolla has used the energy of food to prevent and/or battle all manner of diseases, including cancer, auto-immune disease, depression, and heart disease.

Apart from the 60,000 plus patients he has affected through his practice, many more thousands of people have benefited from Dr. Mincolla’s expertise by way of the numerous seminars, lectures, and weekly television and radio programs that he has participated in. He has appeared recently on Doctor Oz, Better TV, WFXTFOX25 Boston and KCBS in Los Angeles, on numerous national radio shows, and in regional and national magazines. Dr. Mincolla is the author of Whole Health (Tarcher Penguin, 2013) and his new book, The Whole Health Diet (Tarcher Penguin, Jan. 2016). www.MarkMincolla.com