by Fu-Ding Cheng: Shamans are people of two worlds, the physical and the spiritual… 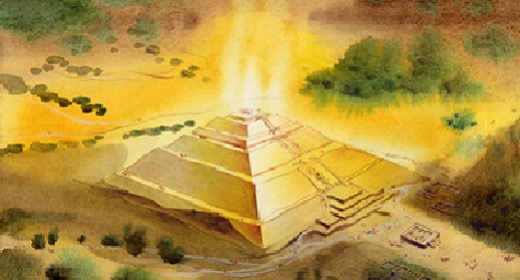 No wonder shamanism has come to such prominence in the last generation; it allows us to be spiritual without being caught by so many of the traps of religions. But true as this is, this was just a fleeting thought, because…

…I’m in the air, soaring. What has happened? A moment of anxiety. But I knew; I had left my body. Don’t think…surrender. From a bird’s eye view, I see the entire layout of Teotihuacan with the Pyramid of the Sun and its dozens of structures as an enormous mandala. Everything from its alignment with the Milky Way down to articulations of every step on the structures contained secrets of the physical universe. It’s an encyclopedia in stone, and if I focused on any detail, secrets would be revealed.

But why bother? Knowledge is so superfluous when you are free and in euphoria! Liberated from the constraints of mind, time and space, free to go anywhere in heaven or earth, I was happy enough just to be. And so I soared…

This life-changing experience took place among the giant pyramids in Mexico on a “power journey” with the Toltec shaman don Miguel Ruiz. With eyes closed, I had walked, trusting my exercise-partner to care for my body as I surrendered to the exercise of “walking blind.” My perceptions had come alive; I could feel the texture of the gravel underfoot, and heard through their crunchy response a greeting from Mother Earth.

I had thought of the thousands who labored to build these pyramids, of don Miguel and countless others who had given themselves so patiently over the years so that others, myself included, could see the light. A wave of gratitude had washed over me, and unabashedly, tears rolled down my face. Then, my body began to tremble. From the top of my head to the tip of toe, every cell seemed to tingle and vibrate, signs of a dimensional shift. With no sense of physical movement except for a tremor that coursed through my body, I found myself soaring through the air…

In the past, we were spiritual beings, nourished by joy. We soared through space, self-luminous and in imperishable beauty. We thus remained for long periods of time…

That experience was one of several extraordinary highlights in my shamanic practice. After that, my concept of what it means to be human shifted permanently: We are all potentially shamans. We are people of “two worlds” who can enter into the spirit realm, receive visions, healings and gifts, and return to earth and share them with our communities. It is part of our birthright.

And we have precedence; it is recorded in our cell memory. Eighteen thousand years ago on the walls of the Trois Freres Cave near Lascaux in France, there was painted a profusion of overlapping images of wild animals presided over by a human wearing a headpiece with reindeer antlers, and wielding one “weapon”––not a spear, but a flute! Known as the Shaman Dancer, it is considered to be the first depiction of a shaman in recorded history––Joseph Campbell pronounced him the “God of the Cave.” From the dawn of being human, shamans have been fundamental to societies all over the world (shaman is a Siberian word for “he who knows”).

We are much more than what we think. If we free ourselves from conventional beliefs tied to the limits of reason, we can tap into the vast ocean of consciousness beyond the mind, and know first-hand that the “Kingdom of Heaven” is indeed within us.

There is a vast world of intelligence beyond the mind. All the things that truly matter––love,

Ever since college days, the idea of shamans coincided with a long-term dream I had to integrate “heaven and earth,” the spiritual and the physical. Of course, many of us intuitively do this all the time. Artists and scientists frequently slip into this “imaginal realm” for their inspiration, for, as Einstein famously stated, “Imagination is more important than knowledge.” But I wanted to cultivate these transcendent flights, gain conscious control over them, so they would open me up to the deeper miracles of life.

Unlike priests or clerics of a hierarchy obligated to fulfill specific rites as demanded by society, shamans were creative improvisers who took basic laws of nature and adapted them to our ever-changing world in order to help their people. To this end, shamans innovatively shaped a unique path, like artists, but their product was not a painting or a song, but a healthy, happy community of individuals.

In this way, I found the path of the shaman a perfect fit for my temperament as an artist on the edge of society’s conventions. But, living in an urban environment, I was far from any living examples, and shamanic practice remained an ideal of a time past. This fascination with shamanism even appeared in a scene from one of my earliest movies, White in Bad Light. Of course, this reference was not based on direct experience as it would take me another twenty years to begin such studies.  Still, I was drawn, even then, to the mysteries of the shaman.

Fu-Ding Cheng began his career as an architect, but has dedicated the past three decades to books, films, and spirituality. Since life-changing experiences with shaman, don Miguel Ruiz, he has been devoted to distilling the highest wisdoms into practical pathways to personal freedom for everyone. For more on his work, please visit:  facebook.com/MapofDesire