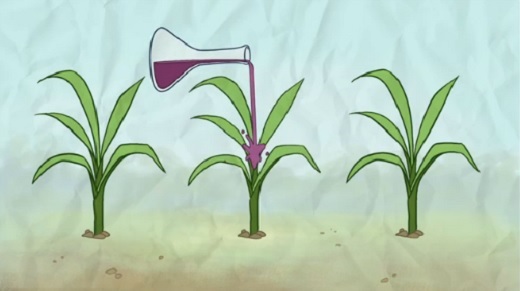 They are the foundation of life, from fruits and vegetables to grain and livestock feed — without them, we have no food. It’s estimated that upwards of 90 percent of our caloric intake comes from seeds, directly or indirectly.

Seeds represent hope and new beginnings. When you save seeds, you’re joining a lineage of farmers, gardeners and seed enthusiasts that dates back to the Stone Age — our civilization arose, in large part, due to seed saving.

Early humans selected the best wild plants with which to feed themselves, passing those varieties along to others by saving and sharing seeds.

Sadly, age-old heirloom varieties are disappearing at an alarming rate — 90 percent of the crop varieties grown 100 years ago are already gone. The Millennium Seed Bank Partnership estimates that 60,000 to 100,000 plant species are in danger of extinction.

In response to these snowballing losses, a movement to save seeds is sweeping the nation.

The PBS documentary “Seeds of Change” features seed savers who are pursuing grassroots alternatives to GMOs and to industrialized agricultural practices that threaten our health and the health of the planet.

The Disastrous Consequences of Patenting Life

Traditionally, seeds have been saved and shared between farmers from one season to the next. Farmers rarely ever had to buy new seed. Nature, when left alone, provides you with the means to propagate the next harvest in a never-ending cycle.

It’s estimated that, since 1970, 20,000 seed companies have been swallowed up by mega-corporations. In 2005, Monsanto bought the world’s largest fruit and vegetable seed company, Seminis, for $1.4 billion.

Many farmers are now dependent on patented GE seeds and must buy them every year from companies like. Saving such seeds is illegal because it’s considered
Farmers don’t buy the seed outright anymore — they essentially buy a license to use the seed for a short period of time — typically one season. It’s more of a lease, or a “technology use agreement.”

For 200 years, the patenting of life was prohibited, especially with respect to foods. But in 1978, all of that changed with the first patent of a living organism, an oil-eating microbe, which opened the proverbial floodgates. One of Monsanto’s proxies has a patent claiming 463,173 separate plant genes!

Patenting of life was never approved by Congress or the American public, but as far as the industry is concerned, they own a gene wherever it ends up and however it gets there.

You have undoubtedly heard the argument that are the only way to feed the world (which is, by the way, completely false). What is often not mentioned in that argument, however, is the inequality of the playing fields.

According to the featured documentary, in one three-year period alone, public funding for the development of GE versus organic crops was 70 to one!
Every Day, Your Food Choices Become Increasingly Limited

Even the popular heirloom tomato has taken an enormous hit, having lost at least 80 percent of its diversity over the last century. Even more tragic is the fact that many of these precious plants are being replaced by patented GE varieties.

The National Geographic infographic below shows how many varieties of fruits and vegetables appear to be nearing extinction.

Five Important Reasons to Save Seeds

There are many advantages of saving seeds, but four of the most important are the following:

Hundreds of excellent plant varieties have been discontinued as big corporations have consolidated the seed industry and focused on more profitable varieties. Half of the vegetables grown today have no commercial sources — they must be obtained through seed trades.

You can select your own seed for uniformity and quality. You can control the gene pool for optimal germination, ripening time, flavor, storage, disease resistance, color, or other traits. After a few seasons, more and more of your plants will have all of your personally selected traits.

The basic operational principle of any library is that you borrow something and later return it. Many seed libraries work on a slightly different principle: the seeds are returned slightly improved or not at all. The program established by the seed library at Hampshire College is a good example. They will loan you packets of seed only if you promise to plant them, and you’re allowed to return them only if you managed to grow thriving plants.

This means there’s a good chance the seeds you borrow will never be returned, and they’ll have different DNA, as the result of natural mutations. Unfortunately, these stipulations mean the number of seeds returned can be very low. For example, after one season at the Concord Seed Lending Library, only five out of 270 people returned their seed.

Besides functioning as a “lending library,” seed banks have another important mission: archiving and preserving knowledge. Seeds in libraries are largely locked away, not reproducing but rather sitting in a drawer waiting for the next plant scientist to retrieve them for study. According to The Boston Globe:”The mission of cataloging and saving seeds has fallen mainly to big seed banks and academic researchers. There are 7.4 million seed samples conserved in professionally managed seed vaults worldwide; the biggest — the Svalbard Global Seed Vault, on an archipelago in the Arctic Ocean — holds seeds for more than 770,000 distinct plants.”
The fact that seed libraries like Hampshire College are actually getting those plants into circulation is a vital part of promoting diversity and creating new and superior strains. According to Stephen Brush, a master adviser for international agricultural development at the University of California, Davis: “The more seeds you can get out in the field, the broader the base of conservation. In a gene bank, evolution is frozen, there’s no more natural crossing.”

Not long ago, there were only a handful of seed banks scattered around the U.S. Now there are more than 200, typically housed in public seed libraries, but also attached to farms, greenhouses and other local facilities. Going forward, seed libraries will continue to fulfill important roles in preserving and often improving local plant strains and allowing communities to refine seed lines tailored to their regions. The more seeds are exchanged and grown, the better the seeds will become.

The world’s greatest seed vaults9 are hidden away in some amazing places, a type of “apocalyptic insurance policy.” If the world were to fall victim to a serious environmental disaster — particularly one of global proportions — our survival could depend on seed vaults.

Some are placed in remote locations, far from civilization and seismic zones in some the coldest regions of the globe, as seeds here would have the best chance of survival in the event of total power failure. And most are the pinnacle of security.

A prime example is Svalbard Global Seed Vault in Norway. Tucked away on a frigid island near the North Pole, Svalbard is described as “the mother of all seed vaults,” serving as backup for 1,750 seed banks all over the world. Currently, approximately 840,000 samples (4,000 plant species) are preserved in Svalbard, but the facility has the capacity to store 4.5 million samples!

If other seed collections are damaged or lost in a global crisis, the Svalbard vault is the place we’ll go to begin rebuilding the earth’s vegetation. A great deal of thought and planning went into its construction:10

“The vault is set nearly 400 feet into a sandstone mountain on Spitsbergen Island. Although no permanent staff are assigned to guard the vault, the structure has an impressive security system that would foil even the most nefarious of seed stealers.

When an organization deposits seeds, only they are able to access the boxes containing those seeds; the organizations retain ownership, making Svalbard simply a storage and preservation facility for the good of the planet.” 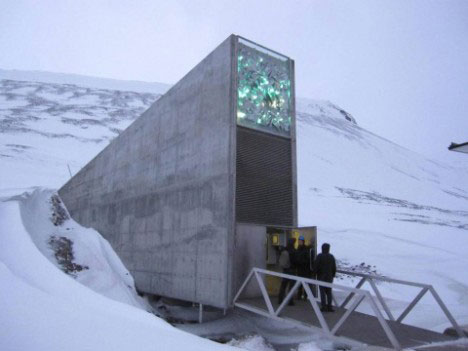 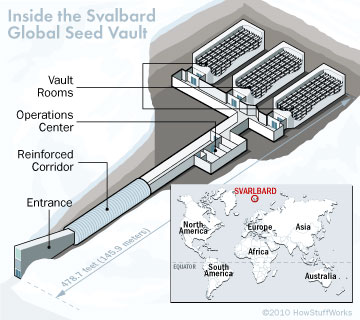 Other impressive seed vaults include England’s Millennium Seed Bank, which houses between 60,000 and 100,000 endangered plant species — an impressive one-fourth of all of Earth’s plants — and the Australian PlantBank, which now houses a staggering 100 million seeds.

In South America, Camino Verde Living Seed Bank has a special mission to preserve medicinal and otherwise useful trees. There’s even a World Vegetable Center, housed in Taiwan, dedicated to improving nutrition and eliminating hunger worldwide. For more information on these vaults and others, this article in Web Urbanist is truly amazing.11

Why Choose Open-Pollinated and Heirloom Seeds Over Hybrids?

As a gardener, one of your more important decisions is whether to choose open-pollinated, hybrid, or heirloom seed varieties — but which are best? According to Seed Savers,12 for seed saving purposes, the most significant distinction among these types is saving true-to-type seed from open-pollinated and heirloom varieties, and avoiding hybrids. Open-pollination seeds are pollinated by insects, birds, humans, wind or other natural mechanisms.

According to Seed Savers:13
“Because there are no restrictions on the flow of pollen between individuals, open-pollinated plants are more genetically diverse. This can cause a greater amount of variation within plant populations, which allows plants to slowly adapt to local growing conditions and climate year-to-year. As long as pollen is not shared between different varieties within the same species, then the seed produced will remain true-to-type, year after year.”
An heirloom variety is a plant that has a history of being passed down multiple generations within a family or a community.An heirloom variety is by definition open-pollinated, but not all open-pollinated plants are heirlooms. Hybridization is a controlled method of pollination in which the pollen of two different species or varieties is crossed (usually by human intervention, although it can happen in nature), usually from a desire to breed in a particular trait.

Hybrids are typically unstable and less vigorous, producing fewer of those desirable traits with each passing year. However, hybrid seeds can be stabilized by open-pollination — by growing, selecting and saving the seeds over many seasons. Choosing open-pollinated and heirloom seeds helps preserve genetic diversity and prevents the loss of unique varieties, including the ones that contribute to our long-term survival because of special hardiness and disease resistance traits.

Biodiversity is our best insurance in times of vulnerability, such as extended periods of drought. A profound example of this is what’s currently occurring in drought-stricken California, where experts say the state’s drought-related economic losses are on track to reach $3 billion in 2015.14 Genetically engineering plants for pest or disease resistance is unnecessary because the same resistance can be accomplished through classical plant breeding, and good cultural techniques and field practices.

I encourage you to support the seed saving movement by borrowing seeds, and by purchasing open-pollinated or heirloom seed varieties for your garden — but don’t stop there! You can take back control over our food supply with the choices you make about your food and personal products. Several suggestions are provided below — but these are just starters. You can change the system daily, bit by bit, simply by voting with your debit card.

If you want to begin saving your own seeds, there are four basic steps: Choosing the right plants, collecting their seeds, cleaning the seeds and storing them appropriately.15 Below are some excellent seed saving resources, as well as suggestions for where to purchase open-pollinated and heirloom seeds.