5 Things I Learn From Gandhi 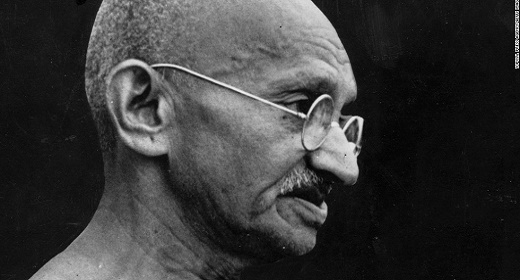 #1: A woman walks with her son many miles and days to come to Gandhi. She is very worried about her son’s health because he is eating too much sugar. She comes to Gandhi and says, “please, sir, can you tell my son to stop eating sugar.”

Gandhi looks at her and thinks for a bit and finally says, “ok, but not today. Bring him back in two weeks.”

She’s disappointed and takes her son home. Two weeks later she makes the journey again and goes to Gandhi with her son.

Gandhi says to the boy, “you must stop eating sugar. It’s very bad for you.”

The boy has such respect for Gandhi that he stops and lives a healthy life.

The woman is confused and asks him, “Gandhi, please tell me: why did you want me to wait two weeks  to bring back my son.”

#2: One of Gandhi’s financial backers once said, “it’s very expensive to keep Gandhi in poverty.” Consequently, I suspect the financial backers felt they had some influence on Gandhi. But money means nothing to a spiritual leader.

One time Gandhi said to a group of his backers, “I need to set aside one hour a day to do meditation.”

One of the backers said, “oh no, you can’t do that! You are too busy, Gandhi!”

Gandhi said, “Well, then, I now need to set aside two hours a day to do meditation.”

Five lessons from this:

A)     Nobody can tell you what to do. No matter what they pay you. No matter what obligations you feel you owe them. Every second defines yourself. Be who you are, not who anyone else is. An entrepreneur, for instance, has investors, customers, partners, employees, competitors. Everyone wants their inputs heard. But only you can act to change the world with your ideas.

B)      If he was, in fact too busy, then it meant he was not devoting enough time to his spiritual life. Hence his backer inadvertently convinced him he needed two hours a day to devote to silence and contemplation. It is through silence that sound, activity, action erupts. It was through nothingness that the Big Bang and all creation, erupted. It is only through contemplation, that the hidden shades of reality can be seen and right action can be taken. Gandhi knew this, and singlehandedly brought down an empire. It’s only through stillness that one can be creative.

C)      I don’t give any advice on things I don’t know about first hand. Sometimes I find myself in a political conversation and I realize, “you know what. I don’t actually know anything here.” And I give up. Or when someone asks me a question on my Twitter Q&As held every Thursday between 3:30 and 4:30 PM EST, I don’t say anything unless I have personally experienced or seen the advice I am recommending.

D)      Sugar is bad. And since most processed carbs break down into sugar, it’s all bad for you if you want to live healthy. Almost every disease out there comes from extra weight. The extra weight comes from the sugars that the body breaks down so quickly it forgets to digest.

E)      Nothing is more important than the cultivation of yourself. So many people think they will save the world if they defeat “them” where “them” is some evil force  that is bringing the world down. But once you divide the world into categories, into an “us” versus “them” then you immediately become the “them” and you lose touch with who you really are. Society is made up of individuals. The only way to improve society is to come at it from a place of deep satisfaction. The only way to do that is to spend long periods of time just being silent. Ask yourself, “these thoughts that I am thinking, what is generating them” in order to find out who the real you is. They are not your thoughts. That is just the biological brain dancing in front of you. Who is the “you” they are dancing in front of. Then you can save the world.

Gandhi knew he could only be effective if he identified with the real “me”, which was deeper than the body named “Gandhi” that was supposedly saving the world. The world is made to be filled with strife. India is a mess now. No matter what Gandhi did. But Gandhi provided a beacon while he lived.

Both of these stories are about the same thing, even though they seem completely different. Gandhi once said, “You must first be the change you want to see in this World”.

Every day I try hard to live by that quote.  I hope you can also.