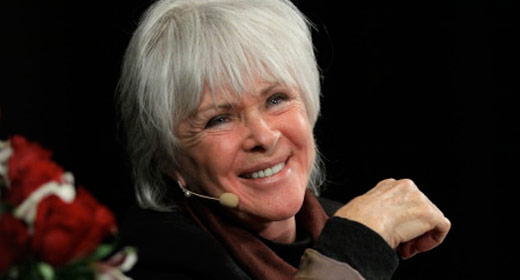 She’s already filled to the brim; there isn’t room for a drop more. When you have what you want — when you are what you want — there’s no impulse to seek anything outside yourself. Seeking is the movement away from the awareness that your life is already complete, just as it is. Even at moments of apparent pain, there’s never anything wrong or lacking. Reality is always kind; what happens is the best thing that could happen. It can’t be anything else, and you’ll realize that very clearly if you inquire.

I have a friend whose wife fell in love with another man. He had been doing The Work for a while, and instead of going into sadness and panic, he questioned his thinking. “‘She should stay with me’ — is it true? I can’t know that. How do I react when I believe the thought? Extremely upset. Who would I be without the thought? I would love her and just wish the best for her.”

This man really wanted to know the truth. When he questioned his thinking, he found something extremely precious. “Eventually,” he said, “I was able to see it as something that should be happening, because it was. When my wife told me about it, she didn’t have to censor anything to protect me. It was amazing to hear what it was like for her, without taking any of it personally. It was the most liberating experience I ever had.”

His wife moved in with the other man, and he was fine with that, because he didn’t want her to stay if she didn’t want to. A few months later she hit a crisis point with her lover and needed someone to talk to. She went to her best friend — her husband. They calmly discussed her options. She decided to get a place of her own where she could work things out, and eventually, after many ups and downs, she went back to her husband. Through all this drama, whenever my friend found himself mentally at war with reality and experiencing pain or fear, he inquired into the thought he was believing at that moment, and returned to a calm and cheerful state of mind. He came to know for himself that the only possible problem he could have was his unquestioned thinking. His wife gave him everything he needed for his own freedom.

I often say that if I had a prayer, it would be this: God, spare me from the desire for love, approval, or appreciation. Amen. I don’t have a prayer, of course, because I don’t want anything but what I have. I know the benevolence of life. Why would I pray for something different, which would always be less than what’s coming? God is another name for reality. It’s complete, it’s perfect, it fills me with the utmost joy. The thought of asking for what isn’t never even arises.

But if I still believed my thoughts, I would pray for one thing first: to be spared from the desire for love. This desire causes nothing but confusion and misery. It shuts down the awareness of what you already have in reality. It’s painful to seek what you can never have outside yourself. I say “can never have” because obviously you don’t understand what you’re seeking. If you understood it, the seeking would be over. Because you think you know what love looks like, what it should or shouldn’t be, it becomes invisible to you. It’s the blind seeking what doesn’t exist. You beg, you plead, you bend over backward and do all sorts of other emotional acrobatics in this unending search for happy endings. Only by seeking the truth within will you find the love you can never lose. And when you find it, your natural response is appreciation.

This would be my one prayer, because the answer to it brings the end of time and space. It brings the energy of pure unlimited mind, set free in all its power and goodness. When you stop seeking love, it leaves you with nothing to do; it leaves you with the experience of being “done,” in a doing that is beyond you. It’s absolutely effortless. And a whole lot gets done in it, beyond what you think could ever have been accomplished.