Guru Singh: Archaeology has explored the similarities in ancient artifacts from geographically diverse regions. The Mayans, Egyptians and Sumerians each used 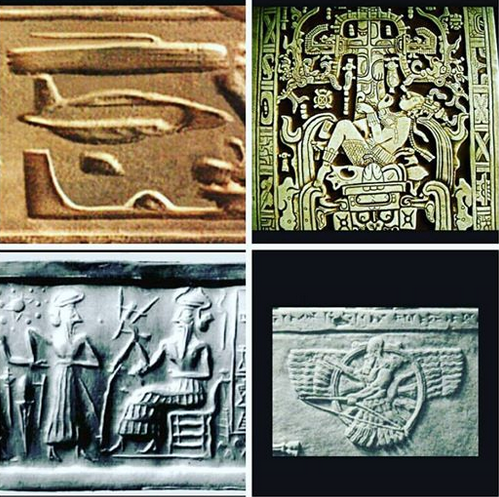 similar symbols . . . all clearly depicting space “aliens.” One theory is that highly advanced extraterrestrials seeded human life on Earth in these areas. Intriguing and compelling analysis has gone into such theories, it adds great value; adds richness to the human story.

There are other explanations as well. Hundreds of miles below the surface of the Earth — there exists the records of previous Earthly realities buried under the massive collisions of constantly shifting tectonic plates. There’s no way of knowing the exact age or history of this planet because the accumulation of these shifts has renewed the Earth’s surface over and over — just like the skin on your body renews every few months. Similarly, the shifting gravitational waves of this megaverse, creates many different ‘celestial’ constellations over millions of years in the larger time.

Within all this shifting, and renewal, lies countless opportunities for many histories, and other explanations of this ancient art. In the yogic mythologies — the Vedic records — there are versions of history based on the model that you are currently living as the ‘fifth evolution of the human race’ . . . four previous humanities existed here on Earth. People, very similar to you, evolved the abilities of space-travel . . . only to self-destruct from mishandling their technology.

At the most advanced stages, these ancient civilizations created temporary homes in the Arctic regions, here they practiced ‘out of body’ celestial travel and advanced enlightenment using the power of Earth’s magnetic poles. This Artic home is written about in the Vedas; in Santa Clause’s flying sleigh — and the Scandinavian and Estonian languages contain remnants of Sanskrit from these migrations passing through their region.

Our prayer is that you are open to exploring the endless possibilities of history; that you believe in magic as well as logic, and love, and allow, your life to become an outstanding future . . . and be extraordinary, right now.