by Kyle Field: With the Tesla Model 3 reveal just around the corner, analysts are getting itchy and curious about the performance of Tesla stock over the next few months… 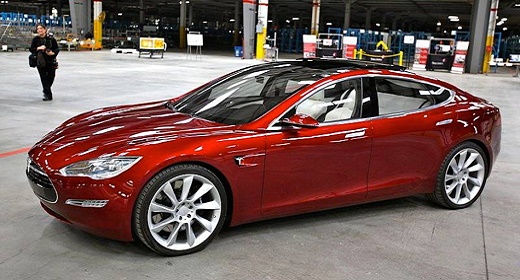 To get a better feel for the progress Tesla is making in preparation for the Model 3 launch, Wall Street insiders are heading over to the Fremont factory for personalized tours of the facility, and the reports that are coming back are exciting.

Tesla has spent $1.6 billion dollars on major upgrades in 2015 in preparation for the Model 3, and has more work (and spending) to do over the next 12 months. A Bloomberg report gives the inside scoop on what the analysts are saying, and they had a lot to say. Stifel analyst James Albertine shared that, “in roughly one year since our last visit, the progress witnessed is truly stunning.”

Albertine and several other analysts noted the new and improved aluminum stamping machine which brings a throughput improvement of 10–20 times vs the previous equipment. This makes sense given the current capacity of 100,000 cars a year with plans to reach 500,000 cars per year a few years later. Elon has revealed that one of the high-production models — the 3 or the Y — will include the falcon-wing doors found on the X. It would be awesome if these came on the 3 and the Y was the compact version of the S… though, the recently shared silhouette of the S seems to indicate otherwise.

One area of improvement (regarding the paint shop) was needed for compliance with government regulations — specifically, for compliance with the Clean Air Act. It had been cited for a violation of its NOx emissions limits back in November of 2014 and, in response, laid out a plan to upgrade the paint shop, which was scheduled to wrap up in January and February of 2016.

Credit Suisse specifically noted that the body assembly line has increased throughput to ~175,000 cars per year ,with final assembly up to 100,000. The analysts did not share if this assembly area is capable of assembling multiple platforms or if it is platform-specific to the Model S, X, or 3.

Maybe most importantly, given Tesla’s more obvious external advantages in the marketplace, are the cultural items the report unveiled. Baird Senior Research Analyst Ben Kallo spoke to Tesla’s unique, continuous improvement culture: “We do not believe this production process is one competitors can easily recreate.” This is a critical piece of insight given the way we have already seen Tesla transform service — moving it from an extremely negative experience into a positive one.

The same can be said of sales, which had to have been my least favorite part of every other car purchase I’ve made, but was conversely one of the most positive, friendly experiences with Tesla. Refuelling has been transformed, driving has been transformed… so seeing that the culture that underpins the company is also radically different from that of the companies who formerly occupied the NUMMI factory (not to mention all the others in the world)… that’s revolutionary. They have done it… again!

It was also obvious to the analysts that battery pack assembly operations have already started moving to the Gigafactory in Sparks, Nevada. This makes sense, but at the same time feels counterintuitive. If you’re going to keep making Model S and X in Fremont, why move battery production to a factory that’s not fully operational? But that, my friends, is a problem for supply chain analysts, not for the likes of you and me. Seeing as how Tesla has been doing what it’s been doing and is doing such a great job (in my opinion), I’ll just leave that one to those in charge. What’s interesting is that Kallo came away from the Fremont factory tour convinced that Tesla is already outperforming the industry on battery pricing. This seems odd given the aforementioned move of battery assembly… but perhaps the analysts also had a look at some financials while in the area.

For Baird, the trip was enough for the company to upgrade its rating on TSLA to “outperform,” with a price target of $300 vs the current pricing of around $230.

Leaning forward into Model 3 and the analysts are optimistic, with Galves noting that, “Model 3 launch timing and ease of mass production is significantly more important than it was for the Model X. On the Model 3, management indicated that there is a clear focus on ease of build, on-time launch, and cost.” With the tension building in advance of the big reveal on March 31st, this surely has allowed many customers, investors, and fans to breathe a deep, calming breath. If Tesla can deliver an easy-to-build, smaller, more affordable version of the S with the 3, the company is going to make it. It is going to be a good day.