Half Of New Cars Could Be Electric By 2040

by Alexander C. Kaufman: But there are four major factors at play… 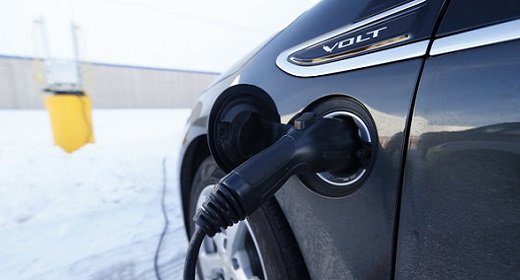 Electric vehicles could make up half of all new car sales by 2040, as long as oil prices eventually increase, according to a study released Thursday by Bloomberg New Energy Finance.

The cost of the lithium-ion batteries that power electric vehicles is quickly decreasing, but sales suffered last year as oil slid below $30 per barrel, making gas-guzzling vehicles more affordable in the United States. If oil remains at rock-bottom prices, it could delay electric vehicles from becoming mainstream for at least the next four years.

“In a scenario where they become widespread in fleets and ride sharing scheme, new EV sales could reach 50% of new car sales by 2040,” Salim Morsy, senior analyst at BNEF, wrote in the study. “However, persistently low crude oil prices could also keep adoption as low as 25% by 2040.”

Electric vehicles currently make up about 1 percent of global annual car sales. Four major factors will determine whether they’ll make up half of the market by 2040.

First, battery prices must continue to fall. This is likely to happen for a few reasons. Demand continues to be high, as more automakers release electric vehicles and the energy storage industry begins to pick up pace. To fill those orders, manufacturers are upping their production. Tesla, for example, is building a $5 billion factory in Nevada that will, at its peak, produce more lithium-ion packs per year than were created in the entire world in 2013.

“It’s very important, insofar as being a first move for establishing large-scale manufacturing assets globally,” Morsy told The Huffington Post on Wednesday. “But, relative to the install demand needed in the future to supply what we project to be demand, it is certainly not as important.”

Analysts expect Tesla, Uber and other car companies to eventually own and operate fleets of autonomous vehicles. If they’re advanced enough to drive themselves, they’ll ideally be advanced enough not to use oil.

Fourth, the electric auto industry must overcome the fact that it’s navigating a combustion engine’s world. By 2030, BNEF expects charging ports to become standardized, much in the same way any vehicle on the road now can connect to a petrol pump at any gas station. Improved infrastructure — and the normalization of plugging your car in nightly at home or at the office during the day — will help the industry clear the range issue that has long dogged it. Just as no one likes having a dead smartphone, no one wants to be left with a car that runs out of battery.

“By and large, by 2030, we think the infrastructure issues around charging EVs will be addressed,” Morsy said. “That means standardization around charging for vehicles — at the moment, it’s not a standardized market — as well as availability of charging points.”

Yet one of the biggest challenges to electric vehicle adoption may not be an economic headwind, but political sabotage. Last week, HuffPost reported that billionaire brothers Charles and David Koch are planning to launch a $10 million campaign aimed at once again killing the electric car. Still, at this point, the industry may be too far along.