The Twilight Language Of Yoga

by Kit Kasi: Myths & Fables. I grew up in a culture of storytelling. 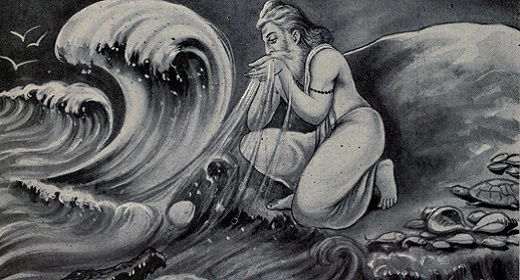 My grandparents, aunts and uncles, and extended elders would tell us episodes from not only the well known epics, Mahabharata and Ramayana, but also the folktales and fables not well known outside of India. They featured yogis, tantrics, magician kings, princess witches and sorcerer-scientists. It was these stories that interested me more — they seemed to convey something deeper and richer that I could connect to.

For many years growing up in the New York region, I was sent to India during the summers to spend time with my grandparents. They would set my brother and myself up with a Sanskrit and Tamil guru who would come to our house and teach us these languages on the front porch, overlooking a garden of mango and coconut trees. Occasionally we would be visited by monkeys and dogs, and that would inspire the guru to recount stories featuring these animals. We had copies of these stories written down in easy reader versions of these languages. Over time I started discovering deeper versions of these stories and many variations that would be written on palm leaf kept within family ‘sami’ rooms or meditation chambers inside relative’s houses.

One day I was introduced to a normal looking gentleman in a suit who worked as a chemical engineer. He had an aura about him and as he shook our hands, he was able to say things about who we were and episodes from our lives that only we could know. He wouldn’t tell us our future on principle, but he would smile or frown as he was tapping into a subtle vibration of our nervous systems that he was able to read like a book. The elders told me he was a Siddhar.

Not This, Not That

The Ancient Tamil Siddhars of India are uncannily similar to the Jedi of Star Wars. They are more practitioners of a process rather than followers of a codified religion, as they can be Hindus, Buddhist, Jain, Sikh, Taoist or Sufi on the outside. A Siddhar is one who is accomplished through awareness, a designation to those who have reached higher states of psychic and yogic capabilities, as well as worldly wisdom. Many of them, rather than being ascetics, secretly roam among us, developing their capabilities for the good of humanity. Whatever can be said about them generally, you will also find the opposite to be true as well. They practice finding truth by proclaiming “Neti Neti”: not this, not that.

The Buddhist, Jain and Sufi cannon, as well as in the Kashmiri Saiva tradition, have some similar overlapping saints and practices. A group closer to my background and whom I find interesting are the 18 Siddhars of Tamil Nadu. The history of the concepts are sometimes purported to go back to a legendary sunken land called Kumari Kandam, referred to in Chola period literature and at other times credited to have a northern origin. Many times, the founder of the movement is credited to being Shiva, not as a ‘God’ to worship, but rather as an ideal used to reach the higher states, which are called ‘Shivam’ or to be like Shiva. His immediate lineage of students/teachers are his wife Parvati, his son Karthik, Sage Agastyar, the most famous tamil mystic (also mentioned in the Vedas), and the fisherman Matsyendranath, founder of Hatha Yoga. Matsyendranath is also the teacher of Gorakshanath, founder of Alchemy and well known Ganja smoker.

Whether 18 is the number of all the Siddhars who ever existed or just a symbolic number that represents qualities is up for debate. The number 18 is representative of the realms above the crown chakra where the human body ends and the cosmic energy continues. Eighteen also represents 18 specific powers or awarenesses. In other groupings of Siddhars the number increases or decreases depending not only on the people being represented but also on its symbolic meaning. The reason these questions are asked is because Siddhars are well known for using a ‘Twilight Language’ as a means to convey an underlying truth through metaphor, parables and paradox.

Trying to explain something in words changes the actual phenomenon because the mental models that create our language are limited to our empirical experience. For example, any explanation of an LSD experience is already not what it was. In the same way, a mystical experience can never be described via the limitations of language. It can only be described by what we already know and perceive by our senses and memory of our current reality. To the Siddhars, goals of Moksha, Samskara, Nirvana, etc. actually hinder our understanding, as what is described is no longer what it is. To take things literally would be to mistake the map for the territory. This is what makes the poetry and fables especially interesting. The use of personified animals, numbers, nonsensical combinations, shapes, characters, vehicles and trails have alternative meanings, or are used as mnemonics for a mostly oral tradition of knowledge. The library is the forest itself.

As in most oral traditions, Indian fables, myths and poetry tend to have many variations with different characters or different outcomes to a similar story or verse. Some of these variations may be used to aid memory in conveying a deeper message. Mnemonics make use of locations, exaggerated images, extreme situations, rhyme and word patterns, repetition and numbers to keep ideas stored in the mind. A character might appear outside their historic time to emphasize ideas and reinforce the legend of being beyond time and space of our shared concept of reality.

The Kingdom of the Forest

In many stories, the forest becomes the place where the protagonists develop their extraordinary powers. In the Ramayana, Prince Rama with Lakshmana and Sita are banished to the forest where they meet sages and animals who tell stories and teach lessons. The same thing happens in the Mahabharata. The Pandava family are banished to the forest and develop themselves through the many adventures they have there. It’s there where they get their special mantras and knowledge that helps them in the battles to come.

The forest is a metaphor for the library of thoughts and ideas that inhabit conscious beings. It is holding the Akashik record of all possibilities in mind-stuff that inhabit the nervous system of living beings. In this record are theVasanas, or the patterns of behavior based on the vibrations of mind-stuff that set those behaviors in motion. We take on these behaviours out of habit and repetition. Many of these patterns come from our animal selves that are governed by the first three chakras of survival and reproduction. Animals in the ancient stories are used to make us aware of these patterns in ourselves and the people around us.

A legendary group of yogi poets known as the 18 Tamil Siddhars often used animal imagery in their twilight language to describe the inner workings of Kundalini, a means of attuning the spinal column to receive and transmit higher thought frequencies. This becomes especially apparent in the descriptions of asanas through observations on how species, such as cats, revitalize themselves. The ancient Tamil book Tirumantaram uses animals for the descriptions of several asanas including the cock posture kikkudasana, and the lion pose simhassana. We see some of them alluded to in these lines:

These seven along with eminent svastika

Constitute the eight, Eighty and hundred, however,

Are asanas in all reckoned.

Several animals represent specific concepts. The monkey is used to represent the mind while a tiger is considered the master of initiation. The lion is the seat of worldly decision and action, and the bull is the guardian of the senses. At times the bull and the elephant are interchangeable.

Snakes have a special significance as the representation of kundalini energy. In many of the Gitas we hear the recurring phrase of the ‘Rope being mistaken for a Snake.” The snake in these lines are the fear of the unknown the practitioner experiences with the rising of kundalini, while the rope is the ability to use this experience as a means of climbing up the chakras. There is also a game based on this concept that came to the west under the title “Chutes and Ladders.” The original was “Snakes and Arrows,” where the arrows are ropes to climb to higher states and good karma while the snakes lead to bad karma and base emotions.

The swan, another important symbolic animal, is mentioned in a verse in theTirumantaram:

Two the swans on the river bank (of life)

The two swans separation know not

if one says he is by himself

Then that foolish swan, grace receiveth not.

The swans have the ability of remaining pure and aware in any circumstance. The verse is a metaphor of the individual self and the universal self. Swans as a pair swim in crisscross fashion like the kundalini energy in the spinal column. If one assumes they are separate from the world, then one is foolish. The awareness is to realize that the two are one and that duality is an illusion.

The writer of these verses can be considered the Obi Wan Kenobi of the Tamil Siddhars. His name is Thirumoolar and the episode of his origin is interesting twilight story in itself. We will look into in the next installment.