Elon Musk Says SpaceX Is Going To Mars By 2018

by Chris D’Angelo: “Either we spread earth to other planets, or we risk going extinct.” 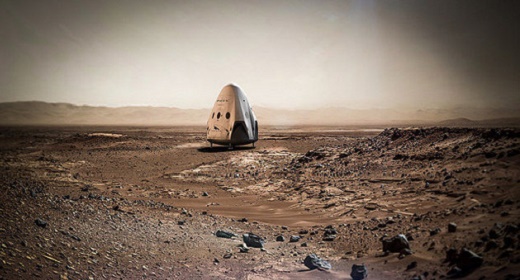 SpaceX told The Huffington Post the upcoming missions — dubbed with the project name Red Dragon — will test propulsion technologies required to land large payloads on the red planet and provide information for its Mars colonization architecture, which the company plans to make public later this year.

Wednesday’s announcement on Twitter comes just weeks after SpaceX pulled off a nearly impossible at-sea landing of its rocket booster — a technological milestone that set the space community abuzz.

SpaceX says the unmanned Dragon spaceships will be carried to Mars aboard Falcon Heavy, a beefed-up version of its Falcon 9 booster capable of lifting the equivalent of a loaded 737 jetliner into orbit.

In addition to Falcon Heavy, slated to begin flying later this year, the company is working to develop its Dragon Version 2 spacecraft, capable of carrying a crew of seven.

Musk hasn’t been shy about his goal of sending people to the red planet. Until now, however, he and SpaceX had not set a target date for initial unmanned missions.

SpaceX has its sights set on sending humans to our neighboring planet by 2026, and Musk says doing so could prove key to our species’ survival.

“Either we spread earth to other planets, or we risk going extinct,” he said at a conference in May 2013. “An extinction event is inevitable and we’re increasingly doing ourselves in.”

“In exchange for Martian entry, descent, and landing data from SpaceX, NASA will offer technical support for the firm’s plan to attempt to land an uncrewed Dragon 2 spacecraft on Mars,” Newman wrote. “As the saying goes, ‘spaceflight is hard.’ Sending astronauts to Mars, which will be one of the greatest feats of human innovation in the history of civilization, carries with it many, many puzzles to piece together.”