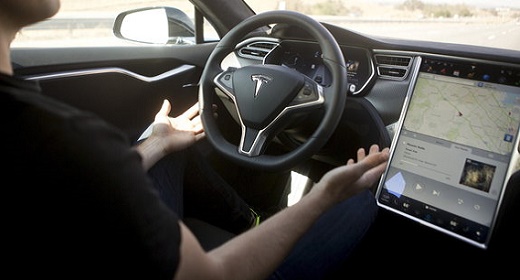 Tesla Motors’ semi-autonomous driving system, Autopilot, reduces the likelihood of getting in an accident by 50 percent, according to company CEO Elon Musk.

Musk made the announcement at a conference in Norway last week, where he also hinted that the electric carmaker was developing a new type of driverless vehicle, according to tech blog Electrek.

Tesla rolled out Autopilot in 2015. The system helps drivers steer, switch lanes and park. Tesla owners have driven nearly 50 million miles using Autopilot, and early data suggest drivers are a lot less likely to get in a wreck when they use the system, according to Musk.

“We can see basically what’s the average number of kilometers to an accident – accident defined by airbag deployment,” Musk said. “Even with this early version, it’s almost twice as good as a person.”

An airbag deploying doesn’t necessarily mean an accident happened, however. And it’s still not entirely clear what methodology Tesla used to arrive at these figures.

But if Autopilot is as effective as Musk says, the technology’s early success could help persuade regulators to approve Tesla’s plans for a fully autonomous vehicle in the near future, said Musk.

“I think it’s going to be important in term of satisfying regulators and the public to show statistically with a large amount of data – with billions of kilometers of driving – to say that the safety level is definitively better, by a meaningful margin, if it’s autonomous versus non-autonomous,” Musk told conference attendees.

Tesla is expected to debut its first fully autonomous car within two years.

While driverless vehicles still frighten some people, they tend to be pretty safe. In over 1.4 million miles of test driving, Google’s self-driving car has found itself in only a handful of minor accidents. Just one of those accidents, a low-speed fender bender in February, was caused by Google’s car.

For autonomous vehicles, the real safety concern is other drivers. The vast majority of road accidents are caused by human error, and even the smartest machines can’t always predict the other drivers’ behavior. The best way to cut down on car accidents might be to get rid of human drivers altogether.