There’s A Misogynist Aspect Of Buddhism That Nobody Talks About

by Devdutt Pattanaik: Hinduism is patriarchal. No doubt about it. So are Christianity and Islam, Sikhism and Shinto, Jainism and Judaism. But Buddhism? 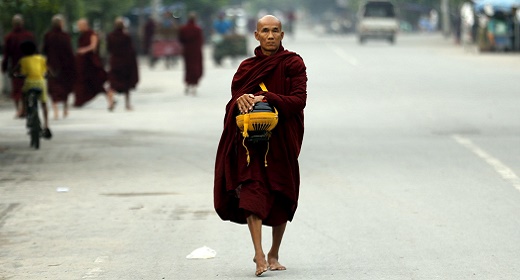 The assumption is that Buddhism is rational, modern, agnostic, and liberal in matters of gender and sexuality. Book after book has conditioned us to see the celibate and chaste Buddha as a kind of androgynous, asexual, gentle sage with a beatific smile. Yet, some of the earliest and most systematic documentation of rejection of female sexuality in Indian literature is from Buddhist scriptures, especially the rules of monastic discipline (Vinaya Pitaka), traditionally attributed to the Buddha himself.

Once a woman laughed and showed her charms to Mahatissa, but he remained unmoved. When asked by her husband if he found his wife unattractive, Mahatissa said he saw no woman, only a heap of bones.

In the story of Sundarasammudha, who leaves his wife to become a monk, the wife approaches the husband and tells him, in what is an allusion to the ashrama system of Hinduism, that they should enjoy the pleasures of marital life till they are old and only then join the Buddhist order together and attain nirvana (liberation through cessation of desires). The monk replies that he would never submit to such seductions which are the snares of death.

Initially, none of these strictures were codified. There was no Vinaya Pitaka. But as many people joined the monastery (vihara), they started behaving in certain ways that were deemed unworthy of monks and seekers of Buddha-hood. People also started making fun of the Buddhist way. So to protect the reputation of the dhamma and the sangha, Buddha began putting down these rules.

Initially, none of these strictures were codified. There was no Vinaya Pitaka. But as many people joined the monastery (vihara), they started behaving in certain ways that were deemed unworthy of monks and seekers of Buddha-hood. People also started making fun of the Buddhist way. So to protect the reputation of the dhamma and the sangha, Buddha began putting down these rules.

We could, of course, argue that that most educated Buddhists were originally Brahmins and so transplanted Hindu patriarchy into Buddhism, that the Buddha had no such intention. We can insist that Vedas and only the Vedas, are the source of misogyny. This follows the pattern of “good” Buddhism and “bad” Hinduism structure we find in most colonial and post-colonial academic papers.

The complete silence on the subject of misogyny so firmly entrenched in the Buddhist scriptures, and traced to the Buddha, is quite remarkable. Research on this topic is well known but restricted to academic circles. There is Buddhism after Patriarchy by Rita Gross and Bull of a Man’ by John Powers, for example. But there is a strong desire in these books to explain away the patriarchy, rather than put the spotlight on them. It is almost as if the scholars are irritated, even embarrassed, that the facts interfere with contemporary perceptions of the Buddha.

Abandoning sex, which effectively means abandoning women, for a “higher” purpose—be it enlightenment or spirituality or service to the nation—has since become a popular model, embraced by religious sects, as well political organisations such as the Rashtriya Swayamsevak Sangh. It has been glamorised and valorised as the ultimate indicator of masculinity and purity. We can trace, at least one major tributary of this idea, to the Vinaya Pitaka of the Buddha, who abandoned his wife, without her consent.