The aging of America means more cases of Alzheimer’s disease… 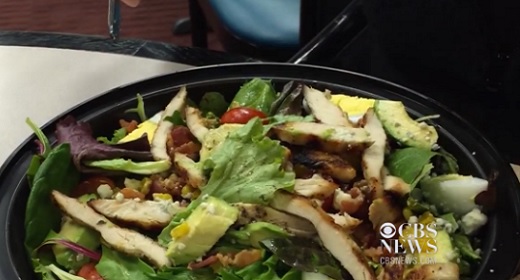 Experts predict the number of people with the condition is expected to nearly triple by mid-century. But there’s growing evidence that there may be a way to reduce the risk for dementia, and it starts in your grocery store aisles.

A number of foods have been associated in studies with a lower risk for Alzheimer’s. They include:

“These foods all have different components in them that are either neuroprotective — they help protect our brain… Other ones give our brain fuels,” registered dietitian Alissa Rumsey told CBS News.

These “brain foods” are also elements of the Mediterranean diet, which includes less red meat and processed foods. Nine out of 12 recent studies found a link between a Mediterranean-style diet and a reduced risk of Alzheimer’s.

More than 100 million adults worldwide are expected to develop dementia by mid-century and that’s adding a sense of urgency to research.

The Alzheimer’s Association has evaluated the evidence and said it does point to a link between heart-healthy foods and a lower risk of cognitive decline.

“It’s about trying to take those refined carbs, and the higher sugar foods and saturated fat, out of your diet slowly and then adding in these foods to replace them,” she explained.

One 2015 study published in Alzheimer’s & Dementia: The Journal of the Alzheimer’s Association, which analyzed the diets of more than 2,200 adults, suggested that eating just some good-for-you foods is better than none at all and may help reduce the risk of dementia. People who mostly consumed an unhealthy diet had about twice as much cognitive decline as those whose diets included a mix of healthy and less healthy items over time.

Still, those in the study who had a mixed dietary pattern — healthy and less healthy — had more cognitive decline compared to those who stuck stringently to a healthy diet, study author Behnaz Shakersain, from Karolinska Institute Aging Research Center, in Stockholm, told CBS News last October, when the research was published.

“It’s never too early, never too late. The healthier you eat, the more benefits — better cognition at older age — you may gain,” said Shakersain.

Another study in 2014 linked consumption of more fried foods with an increased risk for Alzheimer’s.

Along with following a healthy diet, the Alzheimer’s Association recommends other lifestyle guidelines to reduce the risk for dementia, including regular exercise, which may boost blood and oxygen flow to the brain, and staying mentally and socially active.

“I’m just really trying to make the effort to eat more greens and grains,” she said. “I would be happy to know I’m doing the right thing.”