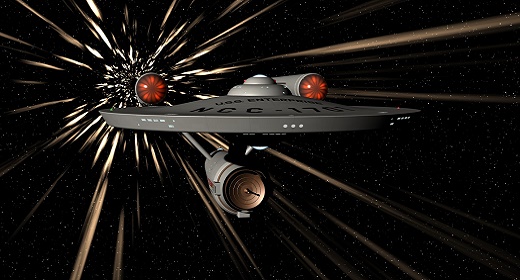 Dr. White is Advanced Propulsion Team Lead for the NASA Engineering Directorate. One of his laboratory’s goals is “to pursue propulsion technologies necessary to enable human exploration of the solar system over the next 50 years, and enabling interstellar spaceflight by the end of the century.”

It’s been nearly half-century since Star Trek (aka Star Trek: The Original Series) debuted in 1966. Since that time, several technologies depicted in that show and later Star Trek shows (ST: The Next Generation, ST: Voyager, ST: Deep Space 9, and ST: Enterprise) are moving from science fiction to science fact. So how close are we today to the world of Star Trek? Let’s take a look at 8 of these technologies.

NASA regards faster-than-light (FTL) travel as “at the level of speculation, with some facets edging into the realm of science.” But as the New York Times reported in 2012, they are funding research into whether FTL is possible, based on the theories of physicist Miguel Alcubierre. Dr. White hopes he can exploit a “loophole” in Einstein’s theory of general relativity. As described by io9:

Essentially, the empty space behind a starship would be made to expand rapidly, pushing the craft in a forward direction — passengers would perceive it as movement despite the complete lack of acceleration. White speculates that such a drive could result in “speeds” that could take a spacecraft to Alpha Centauri in a mere two weeks — even though the system is 4.3 light-years away.

However, other physicists such as Sean Carroll consider this extremely unlikely for a variety of technical and economic reasons. Carroll estimates the odds of humanity ever developing the warp drive at “much less than 1%.”

So for now, the warp drive is still firmly in the realm of science fiction. But we can still enjoy the beautiful starship designs by Mark Rademaker at his Flickr gallery.

However, other technologies from the Star Trek universe are much closer to becoming reality.

The crew of the Enterprise often used a “universal translator” to communicate with aliens.

In real life, Microsoft recently announced Skype Translator, which allows near real-time audio translation from one language to another, utilizing advances in speech recognition and machine translation technologies. The Microsoft Blog noted, “it is early days for this technology, but the Star Trek vision for a Universal Translator isn’t a galaxy away, and its potential is every bit as exciting as those Star Trekexamples.”

Does that sound familiar today?

Star Trek artist Doug Drexler has said that the contemporary Apple iPad is “eerily similar” to the fictional PADDs designed in the 1980s:

The PADD never had a keyboard as part of its casing, just like the iPad. Its geometry is almost exactly the same — the corner radius, the thickness, and overall rectangular shape. It’s uncanny to have a PADD that really works… The iPad is the true Star Trek dream…

Long before I went to medical school, I was intrigued by the tricorder Dr. McCoy used to make his diagnoses.

Today, there are several companies vying for the $7 million top prize of the Qualcomm Tricorder XPRIZE competition. According to the guidelines, entrants must be able to “continuously monitor five vital signs, namely blood pressure, electrocardiography (i.e. ECG, or heart rate/variability), body temperature, respiratory rate, and oxygen saturation” as well as “screen for over a dozen different conditions, including whooping cough, hypertension, mononucleosis, shingles, melanoma, HIV, and osteoporosis.”

One of the front runners, the Scanadu Scout, has a sleek design and works by being placed next to the patient’s forehead. Scanadu has already raised $1.6 million through its IndieGoGo campaign.

Company CEO Walter De Brouwer said he was inspired after his young son required extended hospitalization and he watched the nurses recording his son’s vital signs on a daily basis: “As a big Star Trek fan, I wanted to challenge myself to build something that made the ‘tricorder’ a reality.”

As a physician. an advocate of free market economics, and a fellowStar Trek fan, I’m especially delighted that market-based mechanisms such as crowdfunding and X-Prize competitions may help make De Brouwer’s dream come true.

In real life, the US military is actively working on “directed energy weapons” such as battlefield lasers. The US Navy is scheduled to deploy its first ship-based laser weapon later this summer on the USS Ponce for at-sea testing in the Persian Gulf. Such weapons are intended to be used against enemy small boats and light aircraft. The Navy is also developing similar lasers to be mounted on ground vehicles “to keep enemy unmanned aerial vehicles (UAVs) from tracking and targeting Marines on the ground.”

(No word on whether the weapons will also make the obligatory “pew pew“ sound.)

Star Trek: The Next Generation featured the character of Data, an android Starfleet officer. One of my favorite episodes of that series was “The Measure of a Man,” in which the central issue was whether Data was merely property that could be disassembled at will for scientific purposes — or a sentient being with legal rights. In other words, was Data an “it” or a “he”?

Although there has been a lot of recent discussion over a computer program that reportedly passed the Turing Test (fooling judges into thinking it was human), no one seriously suggests that this particular program is sentient. Sentient machines are still in the realm of fiction. But contemporary robots and “artificial intelligence” technologies are closing the gap with Star Trek.

The Japanese company Softbank will soon sell “affectionate robots“ that are “programmed to read the emotions of people around it by recognizing expressions and voice tones.” A Hong Kong venture capital firm recently named an algorithm to its board of directors, giving it an equal vote in deciding whether or not to invest in biotechnology firms. Engineers are actively working on the problem of “robot soccer“ — which requires solving complex problems in machine vision, rapid control of limbs, coordination between multiple robots, and strategic planning. Their stated goal: “By the middle of the 21st century, a team of fully autonomous humanoid robot soccer players shall win a soccer game, complying with the official rules of FIFA, against the winner of the most recent World Cup.”

MIT’s Technology Review recently discussed the growing debate over whether we should implement some version of Asimov’s “3 Laws of Robotics” that govern robot behavior to protect humans from harm. Ten years ago, I would have said this debate was premature. Today, I’m not so sure.

The transporter is an iconic part of the Star Trek universe. Even people who aren’t fans of the show are familiar with the phrase, “Beam me up.” (Interestingly, Wikipedia notes that “the transporter was created because the budget of the original series in the 1960s did not allow for expensive shots of spaceships landing on planets.”)

At this time, teleporting objects is not yet possible. However, separate teams of scientists at Delft University of Technology in the Netherlands and the U.S. Army Research Laboratory in Adelphia, Maryland have recently reported successes in “quantum teleportation” of information. This may someday lead to the development of more secure methods of information transmission or the development of powerful quantum computers. Unfortunately, you won’t be able beam from New York to Los Angeles at the speed of light.

Strictly speaking, this isn’t really a technology. But encounters with intelligent aliens are a staple of Star Trek.

Although we have not yet made “first contact” with other intelligent life forms, astronomers are making enormous progress in detecting planets outside our solar system. NASA recently announced the discovery of the first potentially habitable Earth-sized planet. A group of biologists led by Louis Irwin estimate that there may be as many as100 million planets in the Milky Way galaxy capable of harboring “complex life.” (Other scientists think this is an overestimate.)

Nobody knows if or when we’ll encounter alien life. But as of last year, the Intrade “betting market” predicted that the likelihood that NASA would announce the discovery of extraterrestrial life (any life, not necessarily intelligent) before midnight December 31, 2015 was 10% (!)

Finally, there are several other fictional Star Trek technologies with early counterparts in the real world.

I could devote a whole article to medical technologies alone. MIT has announced a programmable needle-less medication injector akin to the Star Trek hypospray. University of Pittsburgh Medical Center has started real-life medical trials of suspended animation to help treat severely injured trauma patients. Handheld ultrasound scanners (such as this unit from Signostics) are now regularly used in emergency and military field settings away from the hospital. University of Leicester scientists have developed a prototype “sickbay” bed for emergency patients. 3-D printers now allow creation of customized replacement body parts.