Dying To Know: Ram Dass & Timothy Leary’ Documents Two Men And Their Trip Of A Lifetime

by Kenneth Turan: Timothy Leary and Ram Dass were, at least as far as public images went, the contrasting faces of the 1960s counterculture… 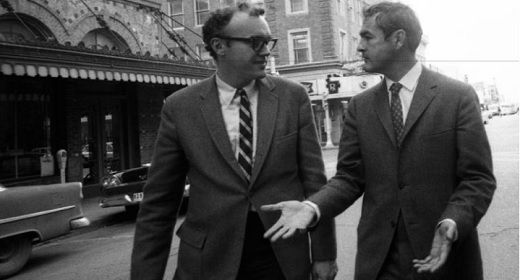 Leary was the LSD advocate, the exuberant popularizer of a “turn on, tune in, drop out” philosophy. He was called “the most dangerous man in America” by Richard Nixon and said of himself, “I think I’ve lived one of the most interesting lives of anyone in the twentieth century.”

Ram Dass, formerly Richard Alpert, was a scientist-turned-guru who saw himself as a bridge between East and West and wrote a massively popular spiritual treatise called “Be Here Now” that went through 43 printings.

But more important than their apparent differences were their similarities, that they were both fascinating talkers who never stopped getting a kick out of what the other person had to say. In the documentary “Dying to Know: Ram Dass & Timothy Leary,” the talk often involves death, which doesn’t make it any less involving.

An admiring, even loving celebration of these two men by filmmaker Gay Dillingham, “Dying to Know” had its genesis in 1995, when Leary announced he had the inoperable prostate cancer,  which caused his death a year later.

Dillingham arranged for the two to have one final “My Dinner With Andre”-type filmed conversation together, and followed up with individual sessions with both men, including several with Ram Dass after he had a serious stroke in 1997. She also added in conversations with people who knew the two men and shared their interests, such as New Age doctor Andrew Weil and Zen Buddhist Roshi Joan Halifax.

Given the circumstances of their final meeting, it’s inevitable that death and dying, “the taboo of all time,” according to Leary, should be the starting point of the conversation with Ram Dass. Both men, it turns out, share the notion that death can be a celebration; in Ram Dass’ words, a time when you “engage with the deepest meaning of the universe.”

To put these comments into perspective, “Dying to Know” (improbably narrated by Robert Redford) provides mini-biographies of both men, filling us in on how they met as well as their lives before and after they connected.

Leary, according to Ram Dass and others, was an authority-questioning Irish rebel, an individual of leprechaun-like mischievousness who, someone says, “walked between conformity and chaos.” For his part, Alpert, in his pre-Ram Dass incarnation, was a high-achieving academic from a wealthy background who hid being gay behind a self-confident facade.

The two met in the 1960s at Harvard, where they both taught psychology and did research involving the use of psychedelic drugs, first psilocybin, the active ingredient in magic mushrooms, and then LSD itself.

Both were powerfully influenced by their initial drug experience, with Leary telling Alpert he’d “learned more about the mind in four hours than in 16 years as a psychologist.” When Leary moved on to LSD, whose indiscriminate use he was not an advocate of, he was so affected that he didn’t speak for five days.

“Dying to Know” goes through many of the permutations of their careers (there  wouldn’t be space to deal with them all), including the reasons for the rift that developed  for a time.

Despite periods of what Ram Dass characterizes as both “deep friendship and deep enmity,” the two ended with a visible mutual respect that made peace with their differences. They both saw themselves, “Dying to Know” posits, as adventurers exploring alternate realities, and hearing where they ended up is a trip all by itself.