by Matt Williams: On June 30th, 1905, Albert Einstein started a revolution with the publication of theory of Special Relativity… 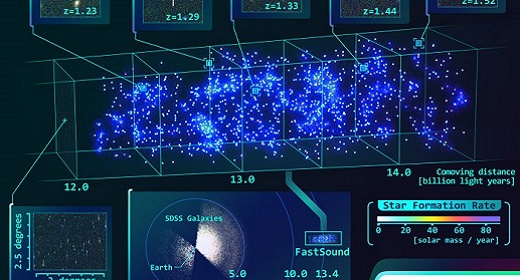 This theory, among other things, stated that the speed of light in a vacuum is the same for all observers, regardless of the source. In 1915, he followed this up with the publication of his theory of General Relativity, which asserted that gravity has a warping effect on space-time. For over a century, these theories have been an essential tool in astrophysics, explaining the behavior of the Universe on the large scale.

However, since the 1990s, astronomers have been aware of the fact that the Universe is expanding at an accelerated rate. In an effort to explain the mechanics behind this, suggestions have ranged from the possible existence of an invisible energy (i.e. Dark Energy) to the possibility that Einstein’s field equations of General Relativity could be breaking down. But thanks to the recent work of an international research team, it is now known that Einstein had it right all along.

Using the Fiber Multi-Object Spectrograph (FMOS) on the Subaru Telescope, the team – which was led by researchers from Japan’s Institute for the Physics and Mathematics of the Universe (Kavli IMPU) and the University of Tokyo – created the deepest 3-D map of the Universe to date. All told, this map contains some 3,000 galaxies and encompasses a volume of space measuring 13 billion light-years. Experimental results looking at the expansion of the universe, in comparison to that predicted by Einstein’s theory of general relativity in green. Credit: Kavli IPMU/Okumura et al.

To test Einstein’s theory, the team  – which was led by Dr. Teppei Okumura, a Kavli IPMU Project Researcher – used information obtained by the FastSound Project over the past few years. As part of their effort to ascertain the origins of cosmic acceleration, this project relies on data collected by the Subaru telescope to create a survey that monitors the redshift of galaxies.

From what was observed over the course of 40 nights (between 2012 and 2014), the FastSound Survey was able to determine the on velocities and clustering of more than 3,000 distant galaxies. Measuring their redshift space distortions to see how fast they were moving, Okumura and his team were able to track the expansion of these galaxies out to a distance of 13 billion light-years.

This was an historic feat, seeing as how previous 3-D models of the Universe have not been able to reach beyond 10 billion light years. But thanks to the FMOS on the Subaru Telescope, which can analyze galaxies 12.4 to 14.7 billion light-years away, the team was able to break this record. They then compared the results to the kind of expansion predicted by Einstein’s theory, particularly the inclusion of his cosmological constant.

Originally introduced by Einstein in 1917 as an addition to his theory of General Relativity, the cosmological constant was basically a way to hold back gravity and achieve a static Universe. And while Einstein abandoned this theory when Edwin Hubble discovered that the Universe was expanding, it has since come to be an accepted part of the standard model of modern cosmology (known as the Lambda-CDM model).

What the research team found was that even at a distance of 13 billion light-years into the Universe, the rules of General Relativity are still valid. “We tested the theory of general relativity further than anyone else ever has,” said Dr. Okumura. “It’s a privilege to be able to publish our results 100 years after Einstein proposed his theory.”

These results have helped resolve something that astronomers have been puzzling over for decades, which was whether or not Einstein’s cosmological constant could be shown to be consistent with an expanding Universe. And while various experiments have confirmed that General Relativity did match observational data, they have been somewhat limited in the past.

For example, the Pound-Rebka experiment, which took place in 1960, was the first confirmation of Einstein’s theory. However, this experiment, and the many that followed in the ensuing decades, were either indirect or confined to the Solar System. A 2010 experiment conducted by researchers from Princeton University confirmed General Relativity to a distance of 7 billion light years.

But with this experiment, General Relativity has been confirmed to a distance of 13 billion light years, which accounts for the vast majority of the Universe that we can see (which is 13.8 billion light-years). It seems that even a century later, Einstein’s theories are still holding up. And considering that he once claimed that the cosmological constant was the “biggest blunder” of his scientific career!