This Video Will Blow Your Mind: Evidence That Lost Civilizations Like Atlantis And Mu Existed 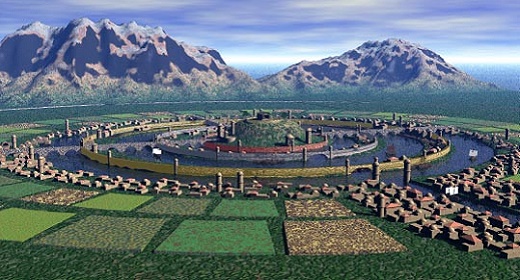 The number of discoveries made around the globe indicate it isn’t far fetched anymore to suggest lost empires such as Atlantis, Lemuria, and Mu existed on our planet in the distant past.

Many researchers around the globe have come to accept the notion that there are many ancient cultures which have retained an imprint of advanced spiritual and technological knowledge.

With each discovery made every single day, scholars are beginning to understand that history as we all have been taught is incomplete. Every new finding is pushing us towards the acceptance that great ancient kingdoms are today lost in the sands of time. They existed long before our current civilizations and inhabited all corners of the world.

Today when we speak about Atlantis, Lemuria, Mu, and other ancient civilizations the world mythology immediately pops up. However, interestingly, there are a number of ancient writings across the planet, among many different cultures which allude to these now lost ancient empires, describing great cataclysmic events that wiped these great kingdoms from the surface of the planet.

The memories remembering these great civilizations are only partially accepted by researchers today. Regrettably, literary accounts available to the general public today are nonexistent. However, we to need them. In fact, many cultures across the globe claim, that this memory has firmly been imprinted into the human brain. It’s as if we know that before the existence of modern society and modern civilizations, a great, ‘lost’ civilization predated it all.

However, this idea is firmly rejected by mainstream archaeology which has tried desperately to dismiss the number of findings and theories as mere fantasy, mythology, and imagination of the uneducated people. However, there is clear evidence that even before the Ancient Aztec, Inca, Maya, Egyptian and Mesopotamian civilizations, other civilizations existed which were wiped out by a great cataclysmic event which occurred tens of thousands of years ago.

Interestingly, this is where chronology seems to agree with ancient texts speaking of long lost civilizations, like the accounts of Plato and Atlantis.

Many researchers argue today that there is evidence that a huge meteor impacted Earth some 13,000 years ago, which caused the rapid melting of the planet’s Ice Caps, resulting in a great deluge that raged across the planet, eventually spelling doom for many ancient civilizations that predate today’s society.

The Eridu Genesis, which is believed to have been composed circa 2,300 BCE, is the earliest known account fo the Great Flood, predating the more popular Great Flood described in the biblical book of the Genesis.

Every new finding is pushing us towards the acceptance that great ancient kingdoms are today lost in the sands of time.

Evidence of a Great Deluge: The Catastrophic event that wiped out ancient civilizations

One of the most widespread stories among today’s society is that of Noah’s Ark and the Great Flood. For years, researchers maintained that this event never occurred and that Noah, the great Ark, and the Great Flood never existed.

However, an underwater archaeologist believes he has found unequivocal evidence that the biblical flood, also mentioned in numerous other religious texts actually is based on real-life events.

Robert Ballard, one of the best-known underwater archaeologists who in 1985, using a robotic submersible with a remote-controlled camera found the famous shipwreck of the Titanic, probed the depths of the Black Sea near the coast of modern-day Turkey looking for traces of ancient civilizations that dates back to the times of Noah. According to Ballard, some 12,000 years ago, much of the Earth’s surface was covered in ice. “Where I live in Connecticut was ice a mile above my house, all the way back to the North Pole, about 15 million kilometers, that is a big ice-cube,” he said in an interview with ABC News. “But then it started to melt. We are talking about the floods of our living history,” he added. According to Ballard, after the water from the glaciers started melting, it rushed into the world’s ocean causing huge, catastrophic flood around the world. “The question is, was there a mother of all floods,” Ballard said.

However, why are mainstream scholars so offended my these accounts? Moreover, why are they so selective in history when they divide truth from fiction.

Each and every time a discovery is made which corroborates the ‘myths’ of a great flood, and pre-flood civilizations, mainstream scholars turn away and close their doors. The question is why?

Well, because such discoveries would eventually lead to another historic timeline. In addition, a new timeline would shatter the current paradigm and require the complete rewriting of our history and civilization as we know it.

It is time that we reevaluate the purpose of our species, it is time to rethink where we all are going as a species, it is time to accept knowledge, and it is time to rewrite history. Current paradigms are up for a much-needed revision, and the institutions that uphold them must eventually understand that mankind is a species with amnesia. However, this does not mean we cannot remember; we are being withheld from the ability to remember and understand that our civilization may, in fact, be one in a long series of ancient civilizations much more advanced both spiritually and technologically, existing on our planet thousands and perhaps millions of years ago.