I Tried Kundalini Yoga. Here’s Everything You Need To Know

by Leigh Weingus: As someone who has been practicing yoga for years, it seems there’s always a new trend on the horizon… 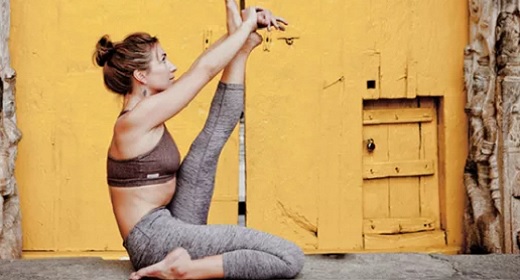 One day I find myself doing my sun salutations in a 90-degree room while Drake croons softly in the background at a hip new studio downtown, the next I’m climbing into a hammock of sorts so I can do yoga upside down.

I’m all about trying new things, so when I started noticing something called Kundalini yoga popping up all over the internet (not to mention my yoga-centric Instagram feed), I was intrigued.

It had come to my attention that a whole group of yogis had ditched their skintight Lululemon leggings and traded them for flowy pants, tops, and gorgeous white turbans.

Naturally, I had to find out what I was missing. So I stopped by a class at Golden Bridge Yoga, a popular yoga studio on Manhattan’s Lower East Side.

Before I tell you what went down during that magical hour and 15 minutes, let’s talk about what Kundalini yoga actually is.

There’s a lot to know about Kundalini yoga. Since this is a crash course, let’s start with some basic facts.

Kundalini is the energy that coils at the base of the spine. This is creative, spiritual energy that is generally untapped—which is what the Kundalini yoga practice is for.

During a class, the idea is to move this energy through the chakras and up into the brain. Your nervous system and body will be totally stimulated, and by the end of the class your whole body should be buzzing with spiritual awareness. Kundalini places a huge emphasis on meditation, mantra chanting, and holding postures.

Although Kundalini yoga has been practiced for thousands of years in the Eastern regions, Sikh leader Yogi Bhajan first brought it to the United Stated in 1969—and I think it’s pretty safe to say we’re all glad he did.

Other than seeing pictures and hearing from friends about the powers of a Kundalini class, I did my best not to google too much about what I was in for. I wanted to be surprised, and in hindsight it was definitely a good move.

The studio at Golden Bridge smelled amazing. The music had a calming, mystical quality to it, and the instructor was indeed donning a white turban. He was wearing loose, airy clothing, and his vibe was relaxed and playful. It was clear he didn’t take himself too seriously—he just wanted to help us all get the most out of our practice.

He asked if anyone was new to Kundalini, and I sheepishly raised my hand. He then went into a colorful explanation of the practice, making it clear that there would be a lot of meditation and breathing.

He wasn’t kidding about the breathing. We practiced panting, breath of fire, and alternate nostril breathing. I was surprised by how much the breathing aspect of it challenged me. I’d practiced all three breathing styles in the past, but I’d never done it for such an extended period of time. It was intense, and I often had to take breaks.

There were no downward dogs and no sun salutations (which I was surprised by—shows what an amateur I am!), but we did take a lot of cat-cows and spend a long time in lotus pose. It was refreshing to spend time focusing on specific postures instead of rushing through them.

My favorite part of the class (also the most surprising) was when we did something called “popcorn.” The instructor encouraged us to pretend the floor was on fire and to try our best not to let any part of our bodies touch it. So for 90 seconds, we laid on the floor and did just that. It was difficult, but it was also a blast and seriously got my core working.

The class wrapped up with a long, delicious Savasana. Why doesn’t every yoga class have a 15-minute Savasana?!

I practically floated home, feeling energized and well-rested at the same time, wondering if I should sign up for a class the following day.

So, should you try Kundalini yoga? Absolutely.