16 Reasons Qigong Will Be Bigger Than Yoga In 16 Years

by Sifu Anthony Korahais: “Maybe if I spell it differently,” I thought. “Maybe that will attract more people to my qigong classes!” 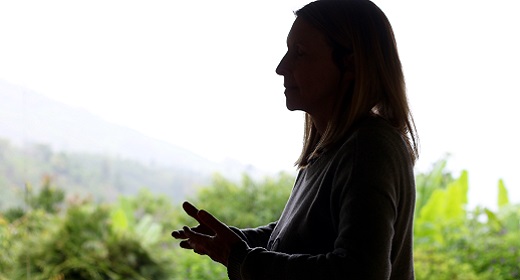 I quickly learned that the spelling wasn’t the problem.

The problem was that Americans had never heard of such a thing as qigong.

I considered using the words “tai chi” instead. After all, there’s a ton of overlap between the two arts. And of course I also practice tai chi.

But the qigong that I teach is significantly different than the tai chi that is commonly practiced. I wanted to differentiate between the two, so I continued to use the word “qigong”.

Zoom ahead 12 years into my teaching career, and the world has changed.

Today, the word qigong — however you choose to spell it — is much more widely recognized.

I wouldn’t go so far as to say that it’s widely recognized.

Most Americans still haven’t heard of it. But awareness is growing, and that’s a wonderful thing.

(Note: if you are new to qigong, then I recommend you read my article: The 15 Most Frequently Asked Questions about Qigong )

Change takes time. It took time for yoga to become the billion-dollar, global industry that it is today.

But I believe that if you give qigong a little time, it will be huge.

In fact, I think qigong will be bigger than yoga one day. Here’s why:

1. Qigong is easier than yoga. Pushing Mountains, from the 18 Luohan Hands

For example, the picture above shows the exercise called Pushing Mountains, which involves gently moving your palms back and forth in a flowing manner, and coordinating your breath with the movement.

Anyone can do this exercise. It can be done sitting, it can be done in a wheelchair, and it can even be done with one arm.

There is only 1 prerequisite for success with qigong: a strong desire to practice for 15 minutes a day (or more).

I probably don’t need the rest of this list. This reason is enough to explain why qigong will explode in popularity.

2. Qigong is easier than tai chi.

There are many reasons why the art of tai chi didn’t experience the same boom as yoga, despite it being practiced in the US for over 50 years.

In my experience, the biggest reason is this: people are intimidated by tai chi.

I can’t tell you how many students have come to me over the years telling me that they previously tried tai chi, but found it confusing, frustrating, and stressful.

With qigong, you don’t need to memorize long, complex routines. Nor do you need to worry about the martial aspects of the art.

Qigong allows you to dive immediately into the meditative and energetic aspects of the art, which is also what brings you quick results. Because there are so many different qigong techniques, it’s easy to raise the difficulty level for those who are ready.

And this is wonderful because it means that the art of qigong can grow with us.

But qigong is unique in that it was actually engineered to be medicine.

(Note: Not all styles of qigong were designed to be medicine. For example, Iron Shirt Qigong is not meant to be medicine, although it can have therapeutic effects.)

Qigong is a branch of Traditional Chinese Medicine, along with acupuncture and Chinese Herbal Medicine.

In China, you can find qigong in the hospitals. In fact, in some hospitals there’s an entire qigong wing!

If you see an acupuncturist in the United States, you will often be prescribed both herbs and acupuncture.

This is because the two forms of medicine compliment each other well.

Perhaps the main reason why qigong is so complementary is because you can take it home and use it safely on your own — something that isn’t possible with most forms of medicine.

Over the years, I have collaborated with acupuncturists, massage therapists, chiropractors, psychologists, MDs, reiki healers, osteopaths, and nutritionists.

I have seen with my own eyes how qigong can greatly complement other forms of healing.

Yoga is empowering too. But unlike yoga, Qigong doesn’t require physical strength or flexibility.

In fact, too much physical strength can be a hindrance with qigong. Body builders, for example, often struggle to relax the muscles and let go of deeper layers of tension.

An art that doesn’t need brawn for success is empowering to women, to the physically unfit, to the disabled, to children, and to smaller-sized men like myself.

7. The world is ready for mindfulness. Mindfulness and meditation have been on the cover of Time Magazine several times.

Even major corporations are talking about mindfulness these days.

The world is falling in love with mindfulness, and this is a beautiful thing.

Wait —  didn’t you know that qigong is a traditional form of mindfulness meditation?

If you’d like to learn more about the connection between qigong and mindfulness, then read my article: 5 Things You Should Know About the Mindfulness Craze

I imagine that yoga is fun for many people. I prefer qigong.

Let’s call this one a tie.

Compared to other arts, you actually need very little training to start getting remarkable results with qigong.

This is because qigong emphasizes internal aspects like mindfulness, breath, and energy flow rather than physical postures and alignment.

I can train a fresh beginner to start getting amazing results in just 3 hours.

In fact, I’ve watched many students learn from me for only 3 hours, but then continue to practice on their own and get all sorts of wonderful health benefits.

With yoga, you don’t usually take a single exercise and do it 20 times in a row.

With qigong, this is the norm.

Repeating a simple, flowing exercise like Lifting the Sky 20 times allows you to forget about the form, and instead focus on the internal aspects.

This creates a wonderfully enjoyable flow when practicing qigong.

This reason is probably unexpected, but I think it is significant.

The world is changing, and the East is becoming a powerhouse, especially China.

People are learning Chinese in order to do business with China.

If you can speak and read traditional Chinese, then you can make the leap to classical Chinese easily.

As Westerners learn to speak and read Chinese, the qigong and tai chi classics will become better studied and translated.

This will only serve to strengthen the art of qigong.

I think it’s only a matter of time before we start seeing pop psych books about applying the Qigong and Tai Chi classics to business and relationships!

There is a growing awareness about acupuncture, Chinese herbal medicine, and feng shui.

In all of these arts, qi is the star.

Although the concept of qi is historically Chinese, it is a phenomenon that transcends culture. It’s all qi — whether you call it qi, or prana, or vital energy.

I believe that, in the 21st century, humans will start to see that it’s all about the qi.

And once they do, it’s natural for them to become interested in the ancient art of cultivating the qi — qigong!

13. Tai chi is empty without qigong.

Although tai chi is more widely known in the US, it is often devoid of real qi cultivation. This is unfortunate.

Tai chi is a martial art that should have the concept of qi as a central training tool.

Many people practice only the external, physical aspects of tai chi, and these people are becoming increasingly interested in qigong to supplement their tai chi training.

Both qigong and yoga can be used to cultivate spirituality regardless of your religious background.

In fact, I’ve taught religious leaders from all of the major world traditions — and none of them had any issues with practicing qigong.

Qigong gives us a wonderful and practical way to work on spirituality.

It allows us to heal not just our body, not just our mind, and not even just our spirit — but rather the combination of all three.

Qigong is all about unifying mind, body, and spirit, not separating them.

For example, some stubborn medical ailments will actually required that you practice exercises that work on mental/emotional/spiritual blockages. Legend has it that Bodhidharma arrived at the Shaolin Temple only to find that the monks were sick, weak, and unable to go deeply into their sitting meditation.

To solve the problem, he taught them qigong.

In my experience, the same phenomenon is happening today. People are practicing sitting meditation, but not reaping the rewards that they deserve.

Simply adding a daily qigong practice can supercharge your meditation, just like it did for the Shaolin Monks 1500 years ago.

16. Qigong is a quicker path to healing.

More than ever, people are looking for fast and effective forms of healing.

Many of these people end up finding qigong — even if they had previously practiced yoga for many years.

Because it is designed as a form of medicine, qigong can be a faster path to getting the results that you want.

If you get good instruction and then practice for 15-minutes per day, you will see good results within weeks, if not days.

And if you practice 15 minutes twice daily, then you’ll see truly remarkable results!

There you have it. That’s why I believe that qigong will be bigger than yoga in 10-20 years.

What do you think? Did I miss any reasons? Do you agree or disagree with my argument?