In 2011, the tiny mountain nation of Bhutan announced a lofty goal: make the country’s agricultural system 100 percent organic by the year 2020… 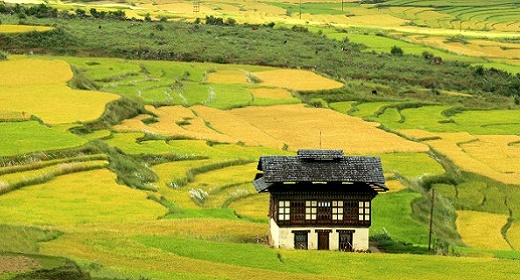 If it succeeded, it would be the first country in the world to achieve the feat.

Bhutan — nestled in the Himalayas between India and China — only has about 700,000 people living within its borders, and most are farmers. It’s a majority Buddhist kingdom, and its culture reflects several key tenets of that religion — sustainable development, conservation of the environment, preservation of the culture, and good governance.

In many ways, Bhutan’s size and Buddhist culture makes it the perfect testing ground for transitioning to a completely organic agricultural system. But would such a shift ever be possible for a larger country, like the United States?

“For a country like Bhutan, there are some things that are a lot easier, because they are a smaller country,” Kristine Nichols, chief scientist at the Rodale Institute, a nonprofit that supports research into organic farming, told ThinkProgress. “When you’re looking at a country like the U.S., if we were to go 100 percent organic, more than likely it isn’t going to be an instantaneous process. It’s going to be a transition process.”

Sowing the seeds of organic agriculture in Bhutan

Bhutan is currently still in the middle of that transition process, though the small country had a few things already working in its favor even before 2011. Bhutan is the only country in the world that rejects gross domestic product (GDP) as a measure of progress. Since 1971, the country has instead relied on a measurement known as gross domestic happiness — a benchmark that seeks to quantify the happiness and health of the entire country.

“When we say happiness, it’s not just happiness of humans. It’s happiness of the soil, happiness of the animals, happiness of all sentient beings,” Appachanda Thimmaiah, Bhutan’s agricultural adviser from 2008 to 2013 and associate professor of sustainable living at Maharishi University of Management in Iowa, told ThinkProgress. “Organic farming was very much part of the gross national happiness. You cannot think about applying chemical fertilizers and pesticides and say that your country is happy.”

That’s a cultural philosophy, Thimmaiah said, that he doesn’t see present in the United States.

“Here, we use the word ‘dirt’ for the ‘soil,’ from a very young age,” he said. “That gets ingrained in the mind, and as the child grows up, the child thinks soil is dirty, so what’s the problem in applying pesticide?”

Beginning in 2008, Thimmaiah worked with the Bhutanese government to help the country begin its transition to 100 percent organic agriculture, a partnership that culminated in the development of a National Organic Policy. A crucial part of implementing Bhutan’s NOP, Thimmaiah said, was expanding the educational resources for farmers — beginning with something as simple as redefining the idea of “organic agriculture.”

“I used a term called low-cost agriculture; I didn’t use the word organic agriculture,” Thimmaiah said. “I told them that our main purpose should be to reduce the cost of production.”

For Bhutan, with its mountainous topography, Thimmaiah was confident that organic agriculture, when done correctly, would be more cost-effective than the transportation costs associated with shipping chemical fertilizer throughout the country. Thimmaiah also worked to help farmers understand organic agriculture as being complementary to the local resources — and even waste products — of Bhutan.

…other countries can also emulate these things

That meant everything from teaching farmers how to produce their own pollinated heirloom seeds to reusing animal waste for manure. Many Bhutanese farmers, for instance, used to keep their livestock outside, tied to trees or in pastures. Thimmaiah encouraged them to build sheds with concrete floors that could help collect the livestock’s waste and urine, which could then be used to help fertilize the crops.

“I think this was really key — demonstration of simple, low cost techniques that utilized the local, available resources,” he said. “If it’s about buying inputs, organic farming cannot be successful. The most important thing in organic farming is to see that all the inputs that are required are produced in the farm itself by the farmers by utilizing the locally available resources.”

Thimmaiah says that Bhutan possesses both the political will and farmer interest to succeed in its goal of transitioning to 100 percent organic agriculture by 2020, but notes that there are some existing hurdles, as the country’s population continues to shift from rural to increasingly urban. And even if the country manages to transition, it still will likely rely heavily on imported food — right now, less than 4 percent of Bhutan’s land is under cultivation, though its agricultural productivity has increased 3 percent since beginning its organic push, according to Reuters.

To Thimmaiah, it’s crucial that the government be involved in the transition and support farmers as they make the move from conventional to organic.

“It’s a responsibility of the country to help them, to regard the good work by the farmers,” he said, adding that “other countries can also emulate these things.”

What would it mean for the United States to go 100 percent organic?

If the United States wanted to transition to 100 percent organic agriculture, Nichols explained, the first steps wouldn’t be much different from the path taken in Bhutan.

“From a government standpoint as well as a private industry standpoint, there needs to be support for these transitioning farmers,” Nichols said. “Without support, it can be difficult for many farmers to survive that transition process.”

In general, organic agriculture is a system that relies on cover crops and crop rotation to ensure soil health, and stresses the reduction of external and off-farm inputs. Organic farming, as a rule, eschews genetically modified crops, and some kinds of organic farming rely more on crop diversity to combat weeds and pests than pesticides and herbicides. But there are different levels to organic agriculture — not all organic practices completely reject pesticides, for instance. Some organic farms do use pesticides, they just use ones that are derived from natural, not synthetic, sources (and sometimes, those pesticidescan be more harmful than chemical ones). And organic farming doesn’t necessarily mean small-scale farming — there is still industrial organic farming, and at least one study has suggested that large-scale organic farming is more carbon-intensive than conventional farming.

Nichols explained that, at least initially, farmers transitioning from conventional to organic agriculture often see their yields decrease, though she notes that several studies have shown marginal decreases in yields over the long-term. It’s worth noting that those studies, however, tend to compare best organic farming practices — like crop rotation and crop diversity — to a type of conventional agriculture that fails to use those practices. When conventional agriculture employs those conservation practices, the Genetic Literacy Project notes, the gap between conventional yields and organic yields widens.

It’s also important to note, however, that much of the grain — especially corn and soy — grown in the United States via conventional farming isn’t intended for human consumption. The vast majority of U.S. domestic corn is used for ethanol fuel or animal feed, leaving a relatively small sliver of the total production for food.

Nichols also notes a lack of infrastructure support for farmers hoping to transition from conventional to organic agriculture — most grain elevators, for instance, are set up to process non-organic grains, meaning that farmers that grow organic could be forced to transport their product long distances for processing, a cost that could negate the economic premium that organic products tend to collect at market. Another hurdle for farmers — at least as long as organic is still the minority production method — is obtaining an organic certification, which can be prohibitively expensive for some small operations.

I tell people, being an organic farmer is a lot more like raising kids than making cars

“There’s a lot of infrastructure things that would need to go into a large country like the United States becoming 100 percent organic,” Nichols said. “In a smaller country, where you’re closer to population centers, what you’re producing can be more directly marketed.”

John Ikerd, professor emeritus of Agricultural & Applied Economics University of Missouri Columbia, also notes that food prices would potentially increase if the United States were to switch to a 100 percent organic agricultural system — but he argues that the increase would not be insurmountable for the consumer.

“The studies that have been done on this indicate if we shifted to a sustainable system, we’d probably increase retail food prices by eight to twelve percent,” Ikerd said. But, he continued, using the majority of corn produced for either ethanol or livestock feed also raises food prices. “We’ve seen retail food prices go up more than that as a consequence of the corn ethanol program,” Ikerd explained. “When we take 40 percent of the U.S. corn crop and burn it in our cars, that takes all of that land out of producing food for either livestock or people.”

“What makes these industrial operations more economically competitive is that they’re not paying the full environmental and social cost of what they’re doing,” Ikerd said. “When you shift to an agriculture that does not impose any of those costs on the environment or the people that work on that system, you’re going to have increased costs in the short term. In the long term, we’ll find that the organic system is less costly.”

In the end, Ikerd, Nelson, and Thimmaiah all agree that for the United States to switch to 100 percent organic agriculture, it would require a massive overhaul of our priorities, at a federal, industrial, and consumer level.

“The main thing is the mindset,” Ikerd said. “It’s a different way of thinking about what agriculture is. I tell people, being an organic farmer is a lot more like raising kids than making cars.”