Elon Musk Isn’t Kidding About Putting You On Mars

by Chris D’Angelo: He has a very specific plan for colonizing the red planet… 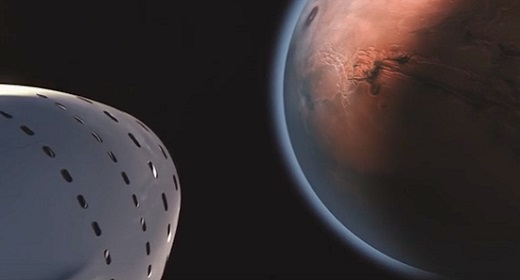 Come hell or high water, Elon Musk is set on sending humans to Mars. And on Tuesday, the billionaire business magnate and tech entrepreneur revealed to the world exactly how he plans to set up a colony on the red planet using Space Exploration Technologies Corp., or SpaceX.

Adopting the latter possibility and colonizing Mars “is the right way to go,” he said.

To get there, SpaceX plans to build a massive “Interplanetary Transport System,” which the company unveiled in a gripping video posted online prior to Musk’s presentation. The company’s engineering models were used to develop the simulated video.

There’s currently no amount of money that can get you to Mars ― and SpaceX estimates the trip would cost around $10 billion per person using traditional methods. That “steep price” doesn’t allow for creating a self-sustaining civilization, Musk said.

SpaceX’s goal is to make the trip affordable, so that the per-person cost of moving to Mars is roughly the price of a median house in the U.S., or about $200,000.

Improving the cost by some 5 million percent, Musk said, sounds “virtually impossible.” But he’s convinced there are ways to do it.

Making spaceships fully reusable will be key, he said in the presentation. It will also be important to pick the right propellant, be able to refill spaceships in orbit and build a propellant production plant on Mars.

SpaceX plans to build giant vehicles that are capable of carrying about 100 people ― perhaps many more in the future ― plus luggage and other cargo. It would take about 10,000 trips to build a self-sustainable Martian colony of 1 million people, Musk said.

SpaceX would eventually grow its fleet to about 1,000 ships, Musk added, estimating it would take between 40 and 100 years from the first flight to achieve a civilization. He is aiming to have the first civilian trip to Mars take place in 2025.

His main motivation for accumulating assets, he said, is making the biggest contribution possible toward becoming interplanetary.

“It would be an incredible adventure,” he said. “I think it would be the most inspiring thing that I could possibly imagine. And life needs to be more than just solving problems every day, you need to wake up and be excited about the future. Be inspired and want to live.”

He plans for the ships to be spacious, with such amenities as games, movies and a restaurant, and for there to be plenty of exciting experiences in the Mars colony.

“It would be quite fun to be on Mars because you’d have gravity which is about 37 percent that of Earth, so you’d be able to lift heavy things and bound around and have a lot of fun,” Musk said.

Robert Zubrin, founder and president of the Mars Society and a longtime advocate of Mars exploration, told The Huffington Post in an email that Musk presented a number of interesting and useful ideas. Zubrin said he doesn’t believe they’re practical in their current form, but added that “with a little modification, they could be made practical and very powerful.”

“I think he will be able to put humans on Mars because he wants to do it,” Zubrin said. “Right now NASA can’t do it because they don’t want to. So Elon seeks solutions for problems, instead of seeking to use problems as rationalizations for endless delay.”

In December, SpaceX made history with an epic vertical landing of a Falcon 9 on land, just 6 miles from where it took off at Cape Canaveral, Florida. It was a moment Musk called “revolutionary“ and a “critical step along the way to being able to establish a city on Mars.” In March, the company completed the incredibly challenging task of landing the 14-story rocket booster on a drone ship at sea. Four previous at-sea landings had ended in flames.

The company’s most recent and dramatic failure occurred Sept. 1, when a Falcon 9burst into flames on the launch pad at Cape Canaveral. Musk called it “the most difficult and complex failure” the company has had in its 14-year history.