by Joe Romm: In doing so, they will wipe out 95 percent of domestic EV makers… 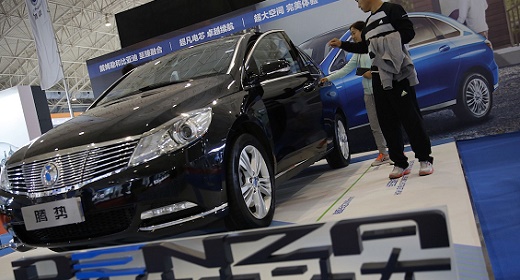 The electric vehicle revolution is now as unstoppable as the renewable revolution. China understands that fact better than any other country.

Much as China did whatever was necessary to become the global leader in manufacturing and deploying both solar and wind energy, they are doing the same for electric vehicles and batteries. They became the number one market for electric vehicles last year, as their sales tripled, Europe’s almost doubled, and America’s flatlined.

The Chinese government is aiming at a more than 1,000 percent increase in sales by 2025, some 3 million units a year. And as Bloomberg reports, to achieve that remarkable goal, “it’s offering subsidies that can total 60 percent of an electric-car’s sticker price.”

What China understands is that EVs are the cornerstone technology for low-cost, low-carbon transport — AND a core enabling technology for deep penetration of renewables into the electric grid.

Indeed, in a major 2016 report, the International Energy Agency explained that “electric vehicles and public transport can lead to a low-carbon mobility system while reducing investment needs by USD 20 trillion compared with current development trends in cities.”

Bloomberg New Energy Finance (BNEF) projects that by 2040 more than one third of all cars sold will be electric — 40 million EVs, over a 70-fold increase from 2015 sales. Battery prices are coming down so rapidly that by the mid-2020s, EVs with 300+ mile range will compete with gasoline-powered cars directly on sticker price — while having vastly lower monthly fuel and maintenance costs.

Ironically, while China is vaulting into the lead in this essential technology, the EV comeback itself was supercharged by Elon Musk and the 2006 announcement that his startup, Tesla Motors, would start making an electric sports car with a 200-mile range. As the the Department of Energy explained in its history of electric vehicles, “Tesla’s announcement and subsequent success spurred many big automakers to accelerate work on their own electric vehicles.”

Today, while Tesla racks up a record-setting 400,000 presales for its affordable Model 3 due out next year, the world’s leading EV maker, China’s BYD, has already sold more EVs than Tesla, GM, and Nissan combined!

As you might imagine, China’s enormous EV subsidies have created a gold rush. There are now some 200 EV startups. But cars aren’t just any consumer purchase — they are the one that is responsible for the most deaths. So, as Bloomberg reported this week, the Chinese government has imposed “stricter technology standards on fledgling manufacturers” and is considering “limiting their number to only 10.”

There’s room for many private-sector winners in the EV race, but right now, it looks like one country in particular is pulling away from the pack in the race to be the world leader.