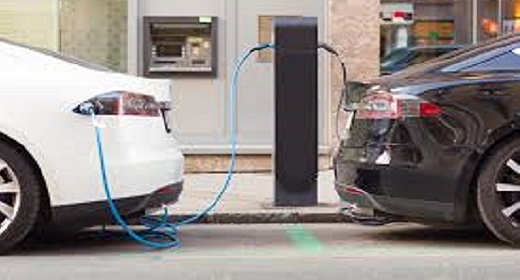 Proposition: Electric cars will remain mostly niche products until they have a range of 800 kilometers, or roughly 500 miles, with an affordable battery.

That’s as far as most people would want to drive in a day, and then they have all night to recharge.

That’s how we came up with a figure of 800 km—or a nice round 500 miles—as the goal for our R&D project, Battery 500. It began in 2009 at the IBM Almaden Research Center, in San Jose, Calif., and has grown since then into a multinational partnership with commercial and academic participants in Europe, Asia, and the United States. It is based on metal-air technology, which packs far more energy into a battery of a given mass than today’s state-of-the-art technology, the lithium-ion battery. We are still years away from commercialization, but we have made enough progress to predict that these batteries could be used in cars in the foreseeable future. Why are we so confident? Read on.

But even though they’re propelled by a near-ideal mechanism, electric cars have a huge drawback, which is the low energy content of the batteries. Gasoline packs about 13,000 watt-hours per kilogram; the best production lithium-ion cells store only about 250 Wh/kg. Add the mass of the ancillary battery equipment—including the bus bars, cooling system, and battery management system—and the energy density of the entire system drops by half, giving the batteries a pitiful 1 percent of the raw energy density of gasoline.

This huge gap between the energy densities of gasoline and batteries seemed to make it impossible to build competitive electric cars, but the success of the Tesla Model S has shown that it can be done. One major factor in favor of the electric car is the high efficiency with which it converts battery power to motive power at the wheels—about six times as efficiently as the average for gasoline-fueled cars in the United States. Also, electric car makers put the biggest, heaviest battery they can reasonably fit into their designs. Even so, the ranges fall far short of the 500-mile target. The upshot is that electric-car batteries need to attain at least twice the energy density of Li-ion cells to achieve a range of 800 km.

In The Electrode—Or On It

A lithium-ion battery puts lithium ions inside the electrode; a lithium-air battery compounds lithium and oxygen on top of the electrode, allowing lighter electrodes

Cost is at least as important as energy density. Today’s battery cells run from US $200 to $300 per kilowatt-hour, which means that—given an average range of 5 or 6 km/kWh—a car with an 800-km range will require a 150-kWh battery costing $30,000 to $45,000. By comparison, the base price of a BMW 2 Series car is $33,000. The price per kilowatt-hour must fall to at most $100 if the technology is to gain a serious foothold. At that price point, the car’s much lower operating costs in energy use and maintenance, together with the sheer pleasure of driving such a responsive machine, will assure success in the marketplace.

But how do we get that 800-km-range battery? Well, start with the current state of the art, the lithium-ion battery. 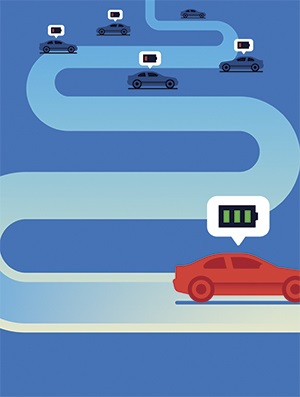 A conventional, or “intercalation,” Li-ion battery is a sealed system that has one electrode made of graphite (the anode) and an opposing electrode (the cathode) typically made from various oxides of transition metals, such as cobalt, nickel, or manganese. Both electrodes are immersed in a liquid organic electrolyte that contains dissolved lithium salts. In this electrolyte, lithium ions travel from one electrode to the other, the direction of travel depending on whether the battery is charging or discharging. In between the electrodes, immersed in the electrolyte, there’s a porous polymeric separator, which prevents the electrodes from short-circuiting. The ions insert themselves between the atomic layers of the electrode material. This process is known as intercalation, and it is reversible—that is, it allows recharging.

If the electrodes are connected through an external circuit, lithium ions will migrate from the negative electrode to the positive electrode while electrons flow through the attached external circuit, thus discharging the battery. An externally applied voltage will reverse the ion flow, recharging the battery. The battery capacity depends on how much material is available for intercalation. In other words, the battery capacity is related to the volume and hence, the mass of the anode and cathode.

Metal-air batteries, however, employ a true electrochemical reaction rather than intercalation. For clarity, we’ll assume that the metal is lithium. During discharge, the metallic lithium anode releases lithium ions; these travel through the electrolyte and combine with oxygen at the cathode, forming lithium peroxide (Li2O2). As in a conventional Li-ion battery, electrons flow through the external load circuit to compensate for the Li-ion flow inside the battery. The lithium peroxide accumulates on the surface of the porous carbon cathode, where the three participants in the reaction (lithium ions, electrons, and oxygen) meet and react. Since the reaction occurs on a surface, the volume or mass of the cathode material does not matter so long as it has a large surface. This is the main reason why this battery type has such high energy density.