by Andrew Silver: Exhaust comes out of the tailpipe of a vehicle… 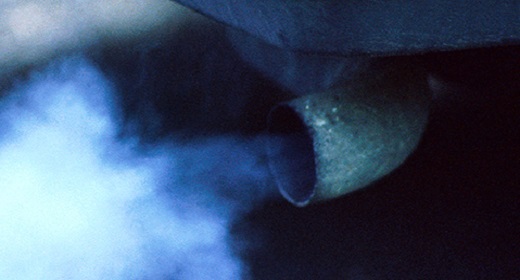 “We do not expect it will become a law within the next 12 months,” writes Volker Quaschning, an energy researcher at the Hochschule für Technik und Wirtschaft (HTW) Berlin, in Germany, in an email. “However, the discussion is interesting…because it increases the pressure on the car industry.”

Echoing similar proposals in Norway and other countries, the heads of 13 out of 16 of Germany’s states voted two weeks ago to allow sales of only zero-emission cars starting in 2030. That would be no small matter, considering that Germany—home of BMW, Mercedes-Benz, and Volkswagen—had 44 million registered cars in 2013.

The states alone are not able to put the ban into effect; only the German federal government can. But they have started a conversation, and researchers say there would be clear benefits.

First, Quaschning calculated that switching to zero-emission vehicles powered by today’s energy mix—about 30 percent generated from renewable sources and 70 percent from nonrenewable sources such as coal and natural gas—would cause a noticeable decrease in CO2 emissions.

In the June 2013 issue of IEEE Spectrum, Ozzie Zehner argued that this sort of emission analysis of electric vehicles often leaves out an important factor: The emissions released during the manufacturing process can overshadow the benefits. However, 2015 research by the science advocacy group Union of Concerned Scientists found that over its life cycle, an electric car still creates about half of the CO2 emissions of a traditional gasoline-fueled car. And once the car has been driven enough, the emission savings add up.

There’s another advantage of the proposed ban. “Reduction in CO2 is only secondary to the air pollution health benefit,” Mark Jacobson, a civil and environmental engineer at Stanford University in California, writes in an email.

Diesel engines are still widely used in Europe—and the black carbon particles they produce can lead to even greater global warming and health effects than does carbon dioxide, Jacobson writes. Early California Environmental Protection Agency research yielded some of the many bits of empirical evidence showing that diesel fumes directly affect health and can increase the risk of cancer. But as of 2013, about 1.4 out of 2.9 million new German passenger cars were diesels.

An additional rationale for the proposed ban: A switch to electric cars could reduce noise pollution. “Today, there is little knowledge about how a whole city or region feels and sounds, in which only electric and nonmotorized vehicles drive,” Christian Scherf, a spokesman for the Innovation Centre for Mobility and Societal Change in Berlin, writes in an email. “However, we assume that the quality of life is noticeably increased.”

Werner Zittel, a physicist and energy consultant at Ludwig-Bölkow-Systemtechnik, in Munich, says a ban “is feasible.” He believes politicians should set rules and let the car industry react by creating engines that meet the new requirements.

Not all agree. Last week, Forbes reported that Germany’s minister of transportation dismissed the idea out of hand. He told the German wire service DPA that an internal combustion engine ban by 2030 would be “utter nonsense.”

A spokesman for Oliver Krischer, the vice chairman of Germany’s Green Party, says the Green Party supports the ban, but notes that the federal government would not likely pass a law without the transport ministry’s support. To his knowledge, the German parliament hasn’t passed legislation without a ministry’s support in at least the past 10 years.

“It’s kind of a big discussion right now going on in Germany,” he says. But the states made a “clear statement.”

The Green Party is calling for an all-renewable energy grid by 2030—an idea that Zittel calls “impossible.”

Don Anair, an electrical engineer with the Union of Concerned Scientists in the United States who studies transportation, says, “I think the important thing for Germany is where the electricity grid is heading.”

“You can’t just look at today’s grid mix and say, here’s what the benefits of electric vehicles are years from now,” he says.

Neither the German Ministry of Economics and Energy nor the Ministry of Transportation were available for further comment.

Germany’s next election is in September 2017, which both Quaschning and Krischer say could change the game—both for the extent of Germany’s use of renewables and whether consideration of an internal combustion engine ban will remain in gear.

Thirteen years from now, Anair says, “obviously that would be a dramatic shift in the auto industry.” He does, however, point out that in the United States there are over 25 models of plug-in or fuel cell vehicles—up from “essentially zero” before 2010.

Sales of these vehicles with much less reliance on the combustion of fossil fuel are increasing, but the question remains: How fast can the industry ramp up, and where is the tipping point at which electric vehicles become a normal purchase, he asks.

“This is a technology that’s here to stay,” he says.