Ken Wilber: What Is Meditation, And How Do I Do It?

by Ken Wilber:  You hear a lot of explanations about all of the things that meditation will do, 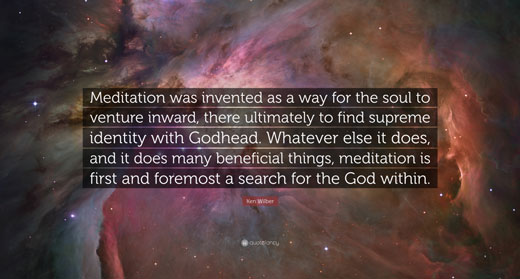 and we’re going through a phase now that’s referred to the “neurophysiology of religion” where we are studying all of these brain functions, and finding, for example, that all of these meditative states have different brain waves associated with them. The Dalai Lama has made the Tibetan community available for research, so hundreds of them are getting hooked up to 16 channel EEG machines, and they’re watching the brain patterns that form. So we found just recently that Tibetan meditators who have meditated for at least twenty years, and are meditating on compassion training, produce an extremely large amount of gamma waves. So a lot of the binaural beat companies have gone out and produced gamma wave CDs that you can plunk in your CD player, put the headphones on, and get a gamma hit.

And all of these are one way to explain what meditation does. There’s a whole school, going back to Herbert Benson of Harvard and his book The Relaxation Response, that maintains that meditation in essence is just that: a relaxation response. It’ll lower blood pressure, slow the heartbeat, slow breathing, lower your metabolic rate, and increase feelings of peace and calm. American Health had a cover story with the Dalai Lama, and there was a two-year-old baby next to the Dalai Lama, and the headline said, “Why is this man’s blood pressure lower than this baby’s?” And the answer, of course, is because he meditated for 40 years!

So meditation has all of these physiological benefits and health benefits. All of those things are true, and all of them are, in a certain sense, utterly beside the point. Meditation, from the first day it was invented, was the royal road to God realization. It’s how you discover God, how you recognize God, how you recognize Spirit, and how you therefore awaken from the illusion of being just this small, finite, skin-encapsulated self that is separated from all the other subjects and objects in the universe, and therefore smashes into them and is tormented and tortured by the fragmentation of everything going on around it.

The Upanishads say, “Wherever there is other, there is fear.” The whole point of meditation in realizing Spirit is that Spirit is also nondual—so Spirit is that which heals all of these fragments and all of these broken, partial, torn pieces that human beings have become identified with. Freud used to talk about “the royal road to the unconscious,” and meditation is the royal road to Spirit.

And we don’t hear that talked about as much, simply because there are so many different forms of religion and spirituality, and many of them are just frankly embarrassing. So we try to steer around talking about God or Spirit, and instead talk about all of these other things that meditation will do. And I’m fine with that, but when all is said and done, if you’re not using meditation to recognize Spirit, then you’re not using it for what it was built for, and you’re not getting the greatest use out of it that you can. And so I can very briefly walk through a typical way of meditating, with that goal in mind.

What we’re talking about is resting in the True Self and simply allowing things to arise, moment-to-moment, as they wish without identifying with them, or judging them, or becoming attached to them, or forming a negative impression about them—but simply resting in this observing self, or this witnessing self, as things arise in the mind, moment-to-moment.

You can spot this True Self very easily. First, simply notice that what you feel now is your self. Simply get a feeling of your self, and just be aware of it. But then notice you are actually two selves. One is the self that you are aware of, that you feel or see as an object—so you’re this tall, you weigh this many pounds, you do this job, you’re in this relationship, and so on. But then there’s the self that is doing the watching: the observing self or the witness or the true subject. The other self isn’t even a real self or a real subject, because you can see it as an object. But the observing self is a real self, a real subject, the true seer. And the True Self can’t be seen. It’s the seer, and nothing that can actually be seen.

So as you rest in the witness or True Self, all you’ll notice is a sense of freedom, of openness, of liberation from the small self and its contracted suffering. And this is your True Self. This is Spirit in 1st-person, the same sense of I AMness prior to space and time, living in a timeless now. “Before Abraham was, I Am.” It never enters the stream of time, and thus is unborn. It never exits the stream of time, and thus is undying. It is open, clear, crystalline, pure, naked, free, liberated, transparent, timeless and therefore eternal, spaceless and therefore infinite, the goal and ground of the entire Kosmos.

So get the body into a relaxed comfortable position. Locate your True Self, the observing self or witness which is fully present right now as this spontaneous awareness you have of everything arising—birds chirping over there, cars honking there, a subtle feeling of heartbeat, various objects and furniture, the computer in front of you, all effortlessly seen by the observing self, the pure witness, the True Self.

Rest in that simple observing state, allowing the world of thoughts, feelings, objects, and emotions to arise as they wish, without judgment, condemnation, or identification. Allow the sense of I AMness to become stronger and stronger, and let your identity with the small, finite self-contraction, and its suffering, depression, grasping, and seeking, to just drop away, leaving the sense of clear I AMness alone—naked, pure, unmoving, and untouched. And this is your True Self and real Spirit.

Rest in this pure witness and observing self spontaneously throughout the day until it becomes your constant condition, which will awaken you not only to the True Self in you, but to God in you as well, True Self and Awakened God being but two names for the same thing.