Ken Wilber – Why Is There Something Instead Of Nothing?

In this series Ken Wilber explores some of humanity’s most profound and perennial questions: Is there a God? What is the meaning of life? What is consciousness? 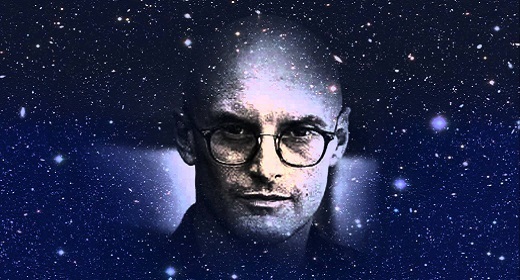 These are questions that we humans have been asking since the dawn of humanity; questions that have inspired history’s greatest philosophers, sages, and scientists; questions that have in many ways influenced the overall shape and scope of civilization over the millennia. We continue to ask ourselves these questions today—often beginning in childhood, and then again and again throughout the rest our lives. Although these questions are in many ways unanswerable, our attempts to answer continue to come closer and closer to the inexpressible truth as our understanding of the universe (and our place within it) continues to unfold and evolve.

Welcome to Big Questions with Ken Wilber, bringing more clarity, more sophistication, and more elegance to our understanding of life, the universe, and everything.

All text transcribed from live interviews with Ken Wilber.

Why is there something instead of nothing?

This has been one of the most frequently asked questions among philosophers. Schelling was famous for asking this, and even Aristotle and Plato disagreed on this and would get into arguments over it. For Aristotle, God meant a total perfection, lacking nothing. So although all manifest things wanted to be God, and part of their telos was sort of moving towards God, God didn’t create any of them. And the reason God didn’t create them is because to create implies that you lack something and that you need something, so something else has to be created. But God is already completely full and self-sufficient, so God doesn’t create anything. And everything is trying to get back to God, though nothing came out of God. And for Plato, a God that can’t create is less powerful than a God who can. So for Plato, everything is created out of this ultimate divine reality.

Early on in my meditative career I asked a teacher the same question, “Why is anything showing up?” And this teacher said, “Because it’s no fun having dinner alone.” [Laughs] And the general idea that you come across again and again is that if there is just self-contained Spirit, and that’s all there is, then there’s no relationship. And so there’s no experience other than just the eternal unchanging—possibly pure bliss, possibly pure joy, but not in any relationship with anything else. You’re just simply there, yourself, experiencing the colossal fullness and eternity and infinity that you are.

And so virtually all of the traditions tell a story about this question. If you were the Ultimate and you could do absolutely anything you wanted to do, what would you do? Another example is that we go to sleep at night, we have a lot of spooky, frightening, nightmarish dreams, and then we wake up, “Oh, wow, that was really spooky”—but in a sense it was a great change, an alternative experience, as long as you wake up. And of course when you went to sleep at night, you knew you were going to wake up.

So if you’re God and you want to play, if you want to go to sleep and have possibly horrible frightening terrible dreams, because it will be all the more fun when you wake up and realize who you are and that you never really could have gotten hurt, that would be an experience. That would be like going to an amusement park and going on the roller coaster or something. But in order to genuinely hold the capacity to be scary, you have to go to sleep and put no limit on how long you’ll be sleeping. So it’s not just that you’re going to sleep for a few hours and then wake up—you could be going to sleep for thousands of years, or millions of years, or billions of years, and that would be the only way to really take it out of your control and put yourself in a really far-out position.

And so the whole rise of the manifest universe is probably the single most common metaphor that is given for why God created something instead of nothing. It’s called lila, it’s the sport and play of God, who is doing this in a playful fashion just to have a change of pace from being infinite Bliss for 98 billion years. Time for a change! And the only way to do that is to somehow become less than God, because if you’re fully God in all of this, nothing’s going to hurt you. I keep thinking this about Jesus Christ—it’s one thing for him to keep going through all of this, but he knows he is the Son of God! How much bad stuff can they really do to him? Kill him; he’s going to rise up in the end! So God has to really get lost, to throw itself out there in a way that is truly, truly getting lost.

The general traditions tell us that there is a process called involution, followed by a process called evolution. Involution is where Spirit steps down, forgets itself, and creates a smaller version of itself, called soul. And in doing that, it forgets that it isSpirit. So soul is born and it’s very spiritual and sort of lives everlastingly—not timelessly, everlastingly. Timelessly is a moment without time, pure presence, everlasting is living on and on in time. So the soul is created, and then as that involutionary process continues, the soul crystalizes down, sediments itself down into a smaller version of itself, called mind. And then that continues, and mind sediments out of itself, crystalizes downward, becomes smaller, more contracted, denser, heavier, and creates the living body, the élan vital made out of prana or libido. And then finally body itself constricts one last time, and sediments and crystalizes downward into an even denser, heavier, less conscious form, and that’s insentient matter. And when Spirit hits that level, then the universe blows into existence with the Big Bang.

And what we have with that first explosion is nothing but insentient matter. We just have strings and quarks and some atoms, and that’s about it. But there’s this force—it’s like if you take a rubber band and pull it and stretch it so that at the top is Spirit and at the bottom is matter, and then you just put a rock on the bottom and let go of it, then the rubber band will just sort of swing back and forth and will slowly pull the rock up. As Hegel said, “even the rocks cry out for God.”

So even the lowest insentient forms of manifestation have a memory in the deepest parts of them, a memory of their true existence as Spirit. And so there is a drive to return to that Spirit. The drive is known by various names; generally eros is the most common. So the eros of the physical plane self-organizes, and starts to push it upward on its return to Spirit. This is a remarkable unfolding. And this return to Spirit is called evolution.

So what’s happening is that you have things like atoms that are for billions of years just wandering around, and then at one point several atoms come together and they form molecules, which is pretty remarkable that something like that would happen. Even more remarkable is that, a couple billion years later, a whole string of different molecules come together, and a cell wall drops over them, and a living cell is produced.

This is the farthest thing from random-chance mutation and natural selection. This is an actual force that is the opposite of randomness and chance mutation. It’s a drive towards self-organization and towards higher forms of unity. And so you get these living cells forming, those come together and differentiate into different functions, and we produce multi-cellular organisms that have different systems. And this includes photosynthetic plants, and then it’s into fish, and amphibians, and then into reptiles, and then mammals. And in each case it’s getting more and more complex and creating more and more astonishingly miraculous types of manifestation. What we see in all of this is that original drive, that eros, which is a drive toward higher and higher forms of unity.

And at each of those stages, relationships are being created. So God can actually experience itself in all of these different sentient beings. No longer alone, it has thousands of sentient beings, all with the same single True Self, interacting with each other and looking at each other. Now, most of them have forgotten what their True Self is, but it’s there, it’s the ultimate Self abiding in each sentient organism. And they’re interacting. So there’s somebody to have dinner with.

And of course, in a lot of nature you could also be dinner. As Woody Allen says, “Nature is one big restaurant.” So this plot of God simply throwing itself out forgetting who it is, for the sport and play of returning—part of it is to experience nightmares, and just terrible things like Auschwitz, or Wounded Knee, or Pol Pot, or Stalin, simply because the joy upon waking up is so much the greater if you’ve gone through a great deal of suffering along the way. So it’s not that Spirit itself didn’t intend this. If you want to get anthropomorphic about it, it sort of understood what it was doing when it threw itself out and created and forgot who it was. That’s the whole point— if it didn’t forget who it was, it wouldn’t be scary. How scary is it knowing that you are God and in any moment you could wake it all up? The point is to really forget who you are, and when that really happens, then here we all are looking at each other, going “what am I doing here? Who are you? What is this?” We have forgotten. As Boethius said to Philosophiae in his time of distress, “You have forgotten who you are.”

So the whole nature of a spiritual practice is self-remembrance, remembering who and what we really are. And that becomes part of the whole game of Spirit’s sport and play. And so it’s doing this just out of the sheer spontaneous fun of it. It’s doing it because it wants to create relationships, I/Thou relationships. It wants to have experiences other than this pure, monotonous, infinite Love-Bliss. And it wants to play with all of these variations as it returns slowly, slowly, slowly to self-remembrance. And then presumably, at least according to the traditions, after the vast majority of sentient beings have awoken to their True Self, then Spirit at some point has its own epiphany, looks around, sees that most people know who they are, and it says, “Okay, it’s no fun anymore.” And it closes its eyes, breaths in, the whole universe dissolves. Sneezes, breaths out again, and another Big Bang.