by Umair Irfan: Fuel cells are better than ever but refueling infrastructure lags… 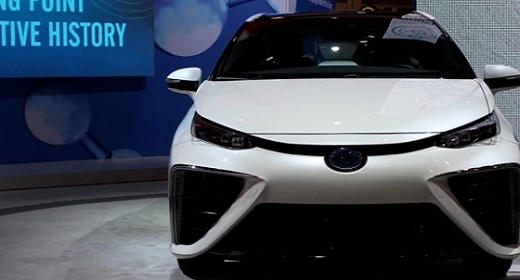 It’s been a good year for fuel cells.

Several automakers in the United States now offer fuel-cell-powered cars for sale as hardware costs have plummeted. Toyota Motor Corp. ramped up production of its hydrogen fuel-cell-powered car, the Mirai, from 700 units last year to 2,000 this year, and is aiming to make 3,000 in 2017.

California now has more than 20 hydrogen fueling stations, and the Department of Energy and the National Park Service unveiled a hydrogen fueling demonstration facility in Washington, D.C., as the agencies have added hydrogen-powered cars to their fleets.

On Oct. 8, DOE celebrated hydrogen and fuel-cell day (the date was chosen to symbolize the atomic weight of hydrogen: 1.008), highlighting how the agency’s research efforts have driven fuel-cell costs down.

“This is a really exciting time,” said Sunita Satyapal, director of the fuel-cell technologies office at DOE. “Through our independent analysis, we’ve seen costs come down by 50 percent since 2007.”

Yet hydrogen fuel-cell vehicles still lag far behind electric cars, and the hydrogen economy hasn’t blossomed, even though the technology has been around since the 1970s (ClimateWire, June 4, 2013).

The cells themselves have made dramatic improvements in efficiency and cost, but the infrastructure needed to support them remains a weak point, researchers and analysts say.

Fuel cells use a fuel to generate electricity via an electrochemical conversion process. In a hydrogen fuel cell, a catalyst separates electrons and protons in hydrogen atoms to generate a current, releasing water as the only byproduct. The process is two to three times more efficient than combustion, according to DOE.

This makes fuel cells an appealing energy system for vehicles, especially since fuel cells closely match how people already drive. A hydrogen fuel tank can fill up in a few minutes, compared to several hours for a battery.

But there are some caveats: Like a battery-powered car, fuel cells are only as clean as the fuel that powers them. Hydrogen can be generated from splitting water molecule, but the most common and cheapest way to make hydrogen is steam reforming methane, the major component of natural gas. This process produces greenhouse gases.

Satyapal said researchers are now developing ways to produce hydrogen cheaply from renewable sources. “Our target is $4 per gallon of gasoline-equivalent cost,” she said. Current retail prices for hydrogen fueling stations are between $13 and $16.

The other challenge is the fueling stations. Places that can provide hydrogen to fuel-cell cars are expensive to build and have fewer cars with which to recoup their costs at the outset.

Fueling stations need large storage tanks that can hold hydrogen at very high pressures, and much of the hardware is being developed for the first time, further raising prices.

“It’s a very limited supply chain,” said Satyapal. “Even a single nozzle can be very expensive.”

Electric cars, on the other hand, can charge up at a wall outlet, albeit slowly. This gap in infrastructure means it’s going to be hard to convince people to buy fuel-cell-powered cars for a while.

“Really, we see the outlook for fuel-cell vehicles is pretty grim,” said Chris Robinson, a research associate at Lux Research Inc. “It’s going to be really hard for a consumer to justify this.”

There is one potential outlier: Japan.

“Japan is the one area where fuel-cell vehicles could really catch on,” said Robinson. “Japan doesn’t really have another viable option [for fuel] other than imports.”

With limited natural resources and high energy prices, an island country like Japan can make a better case for a hydrogen economy. “You can, with a smaller number of stations, provide coverage to the entire island,” Robinson said.

The Japanese government seems to agree and is investing heavily in hydrogen infrastructure (ClimateWire, May 3).

And Satyapal is still optimistic about fuel cells catching on. While passenger cars may be a tough sell, fuel cells may make more sense for fleet vehicles that travel the roads during the day and return to a central station. Several automakers, including Toyota, have announced projects to develop fuel-cell-powered buses.

“This is not a laboratory curiosity anymore,” she said. “We just have to keep up the momentum.”