I’ve Used A Meditation App Loved By Wall Streeters And Olympic Athletes Daily For The Past 8 Months, And Now I Can’t Imagine My Life Without It

by Richard Feloni: Over the past eight months, I’ve had fun being the obnoxious guy who tells everyone he meditates every day… 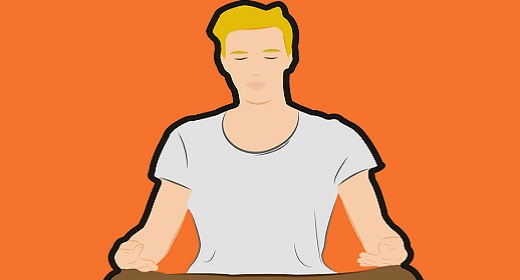 Ever since I decided to try out the guided-meditation app Headspace last December after hearing about it on Tim Ferriss’ podcast, I’ve been much more aware of my thoughts and emotions, and with a few exceptions (including a rough day at the airport) I’ve been much calmer and more collected in times of stress.

I’ve dealt with occasionally intense anxiety since I was 11 years old, so that’s an accomplishment.

Headspace isn’t a hippy-dippy placebo; it’s a straightforward teacher that helps you learn the basics of breathing and visualization associated with secular meditation.

The company reports it has 8.5 million active users, and this includes Wall Streeters, Olympic athletes, and celebrity executives like Arianna Huffington and Richard Branson. Companies like Goldman Sachs and the Dana-Farber Cancer Institute have bought package subscriptions for employees. The app is free to download, but a subscription unlocks full access to all of its lessons.

After using it for so long, I’ve gotten to a point where it’s become an essential part of my daily routine. Below, I’ll break down what it’s like to use.

Headspace was founded by Rich Pierson, left, and Andy Puddicombe in 2012. Puddicombe was formally trained as a Tibetan Buddhist monk during a 10-year excursion in his 20s. Headspace’s lessons are secularized versions of exercises Puddicombe studied.

Puddicombe is your Headspace teacher. He appears periodically in video tutorials to give you a bit of extra insight. I’ve become very familiar with his English-accented voice!

When you begin Headspace, you have access to the 30-day Foundation pack, which introduces you to the basics of guided meditation.

After going through the first 30 days, you can access the rest of the exercises through a subscription.

I signed up for the year subscription, which now goes for $96, though you may find some promo codes floating around for a discount.

It’s certainly not cheap, but if you take it as $8 a month, it’s worth it for a daily user.

You select a pack from one of the categories. Here’s some of what you can find in the Health pack.

The variety has kept me looking forward to trying new things within the app. Each pack lasts either 10 or 30 days, and you choose if you want each session to last 10, 15, or 20 minutes. I always select 10 minutes.

There are five categories: Foundation, Health, Relationships, Performance, and Headspace Pro (less guidance during the exercise).

Each selection in the category has a fundamental exercise attached to it. For example, I’m currently in the Creativity pack from the Performance category, and it includes an exercise where I make an effort to focus on my breathing for a few moments before letting my attention drift.

After eight months, I still look forward to each new pack, but I’ve found that there is a lot of overlap among the exercises.

Your packs are arranged in an ascending timeline, with your current pack at the top.

The app’s interface is user-friendly and I find the pastel colors and goofy cartoon characters charming.

Your profile page records your stats.

The gamification of Headspace is both a plus and a minus.

I almost always find myself looking forward to progressing in the app, but I also have become obsessed with achieving the 365-days-straight award. With each new milestone, a cartoon-brain man in the app transforms, lifting something heavier. My little guy is currently holding up an anvil.

On days when I’m tired or running behind schedule, I’ve found myself faking a meditationsession by fast-forwarding the lesson so the app thinks I actually sat through it. Whatever it takes to keep the streak going! (I know it defeats the purpose, and once I get the final award I’ll probably just use the app for its actual purpose.)

I used to meditate on my own in high school, and I’ve taken yoga lessons, so the concept of meditating isn’t foreign to me. My ideal place to meditate is from a sitting position on my apartment floor. Here’s my glorious view!

My favorite time to meditate is in the morning because it primes me for the day, though I also frequently meditate before bed.

And though I try to use Headspace in my apartment, where I can do the exercise in relative quiet, I’ve also used it during my commute on a train and plane.

I’ve had people ask me if something meant to increase your focus can actually work on your smartphone — the most distracting thing in our lives — with a pair of headphones attached, but I don’t find it to be a problem.

It doesn’t take much self-control to put your phone on Do Not Disturb mode as you dedicate 10 minutes to alone time.

So what exactly does meditation entail? As I’ve learned through Headspace, it’s not actually useful to sit there with your eyes closed and try to rid your mind of all thought.

In one of Puddicombe’s animated tutorials, he portrays the basics of meditation with a simple metaphor.

Imagine yourself sitting by a busy highway. Cars continue to pass by. You can choose to sit there and notice the cars without focusing on any of them, or you can follow a car down the road.

It’s the same with meditation. As you sit there, eyes closed, controlling your breathing, all kinds of thoughts will be flying through your mind. Instead of exerting energy to try to block them, which often backfires, continue to focus on your breath and let the ideas float by, acknowledging that they exist without engaging them.

There are also Singles, which are specialized exercises you can do at any time without affecting the progress of your current pack.

There are a variety of singles available, including a new category that is specially designed for kids.

I’ve only tried a few, in the SOS (emotional meltdown) and Sleeping categories.

They are much shorter than the regular exercises and are good for a quick meditationfix if you’re in the mood.

I’ve found that I prefer sticking to the main timeline.

The reason why I enjoy Headspace so much is because it gives me a daily reminder to calm down, relax, and realize that I’m in control of my emotions regardless of what’s happening around me. It’s definitely worth a try if you struggle with any form of anxiety, and it’s also worth checking out if you’ve ever tried yoga or meditation before.