Kundalini Yoga (kuṇḍalinī-yoga), also known as laya yoga, is a school of yoga that is influenced by Shaktism and Tantra schools of Hinduism… 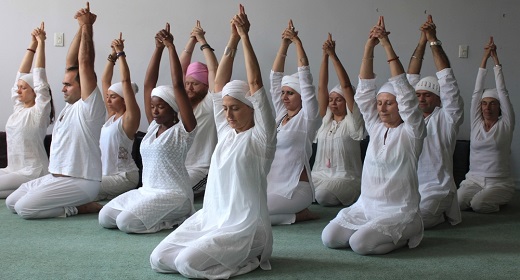 It derives its name through a focus on awakening kundalini energy through regular practice of meditation, pranayama, chanting mantra and yoga asana.[1] Called by practitioners “the yoga of awareness”, it aims “to cultivate the creative spiritual potential of a human to uphold values, speak truth, and focus on the compassion and consciousness needed to serve and heal others.

What has become known as “Kundalini yoga” in the 20th century, after a technical term peculiar to this tradition, is actually a synthesis of many traditions which may include haṭha yoga techniques (such as bandha, pranayama, and asana), Patañjali’s kriya yoga (consisting of self-discipline, self-study, and devotion to God), tantric visualization and meditation techniques of laya yoga (known as samsketas),[3] and other techniques oriented towards the ‘awakening of kundalini’.[4] Laya may refer both to techniques of yoga, and (like Raja Yoga) its effect of “absorption” of the individual into the cosmic.[5] Laya Yoga, from the Sanskrit term laya meaning “dissolution”, “extinction”, or “absorption”, is almost always described in the context of other Yogas such as in the Yoga-Tattva-Upanishad, the Varaha Upanishad, the Goraksha Paddhati, the Amaraugha-Prabodha, and the Yoga-Shastra of Dattatreya.[6][7] The exact distinctions between traditional yoga schools is often hazy due to a long history of syncretism, hence many of our oldest sources on Kundalini come through manuals of the tantric and haṭha traditions such as the Hatha Yoga Pradipika and the Shiva Samhita. The Shiva Samhita describes the qualified yogi as practicing ‘the four yogas’ to achieve kundalini awakening while lesser students may resort solely to one technique or another: “Mantra Yoga and Hatha Yoga. Laya Yoga is the third. The fourth is Raja Yoga. It is free from duality.”[8]

The Sanskrit adjective kuṇḍalin means “circular, annular”. It does occur as a noun for “a snake” (in the sense “coiled”, as in “forming ringlets”) in the 12th-century Rajatarangini chronicle (I.2). Kuṇḍa, a noun with the meaning “bowl, water-pot” is found as the name of a Naga in Mahabharata 1.4828. The feminine kuṇḍalī has the meaning of “ring, bracelet, coil (of a rope)” in Classical Sanskrit, and is used as the name of a “serpent-like” Shakti in Tantrism as early as c. the 11th century, in the Śaradatilaka.[9] This concept is adopted as kuṇḍalniī as a technical term into Hatha yoga in the 15th century and becomes widely used in the Yoga Upanishads by the 16th century.

The Upanishad more likely dates to the 16th century,[citation needed] as do other Sanskrit texts which treat kundalini as a technical term in tantric yoga, such as the Ṣaṭ-cakra-nirūpana and the Pādukā-pañcaka. These latter texts were translated in 1919 by John Woodroffe as The Serpent Power: The Secrets of Tantric and Shaktic Yoga. He identifies the process of involution and its techniques in these texts as a particular form of Tantrik Laya Yoga.[10]

The Yogakundali and the Yogatattva are yoga texts related to the school of Hatha yoga and Mantra yoga.[11] They are part of a tendency of syncretism combining the tradition of yoga with other schools of Hindu philosophy during the 15th and 16th centuries.[citation needed]

The Yoga-Kundalini Upanishad itself consists of three short chapters; it begins by stating that Chitta (consciousness) is controlled by Prana, and it’s controlled by moderate food, postures and Shakti-Chala (I.1-2). Verses I.3-6 explain the concepts of moderate food and concept, and verse I.7 introduces Kundalini as the name of the Shakti under discussion:

I.7. The Sakti (mentioned above) is only Kundalini. A wise man should take it up from its place (Viz., the navel, upwards) to the middle of the eyebrows. This is called Sakti-Chala.
I.8. In practising it, two things are necessary, Sarasvati-Chalana and the restraint of Prana (breath). Then through practice, Kundalini (which is spiral) becomes straightened.[12]

Although kundalini developed as a part of tantra side-by-side with hatha yoga through a process of syncretism, Swami Nigamananda (d. 1935) taught a form of laya yoga which he insisted was not part of Hatha yoga.

Swami Sivananda (1935) introduced many readers to “Kundalini yoga” with his book on the subject in 1935. Swami Sivananda’s book combines laya teachings from older sources including the Hathapradipika and Satcakranirupana.[13] Together with other currents of Hindu revivalism and Neo-Hinduism, Kundalini Yoga became popular in 1960s to 1980s western counterculture.[citation needed]

In 1968, Yogi Bhajan introduced his own brand of kundalini yoga into the United States, “Kundalini Yoga as taught by Yogi Bhajan”. Yogi Bhajan founded the “Healthy, Happy, Holy Organization” (3HO) as a teaching organization. Yogi Bhajan took yogic postures and techniques, attached them to Tantric theories and Sikh mantras, synthesizing a new form of ‘Kundalini’ yoga. “When placed alongside the teachings of Swami Dhirendra Brahmachari and Maharaj Virsa Singh, it becomes strikingly apparent that at least in its earliest years, Yogi Bhajan’s Kundalini yoga was not a distinct practice, but essentially a combination of yogic mechanics learned from the former and the Sikh-derived mantras (Ik Ongkaar, Sat Naam, Sri Waheguru) and chanting from the latter,” Deslippe writes.[14] But Virsa Singh rejected Bhajan’s Kundalini yoga. Yoga was not a part of the Gobind Sadan spiritual path. And a power struggle ensued over who would win control of the new American followers.[15]

Traditional Sikhs use quotations by Bhai Gurdas, whose “Vaaraa,” or “Ballads,” were considered by Guru Arjan as a key to understanding the concepts of the Guru Granth as saying, wherever Guru Nanak went and debated the futility of yoga, the yogis gave up their yogic paths. The yogis of “Gorakhmata,” meaning “Wisdom of Gorakhnatha,” the founder of Hatha yoga, converted to the path of Guru Nanak, and also changed the name of their ancient center to “Nanakmata,” meaning “Wisdom of Guru Nanak,” known today as Gurdwara Sri Nanakmata Sahib. Guru Nanak never practiced yoga, and neither did any of the following Gurus, their Sikhs or the Khalsa. Yoga is unmistakably refuted in the Guru Granth.[15]

Disciples of Harbhajan Singh (Yogi Bhajan) claim that while Yoga practice and philosophy are generally considered a part of Hindu culture, Kundalini Yoga as taught by Yogi Bhajan is founded on the principles of Sikh Dharma. While adhering to the three pillars of Patanjali‘s kriya yoga system: discipline (tapaḥ), spiritual study (svādhyāya) and devotion to God (iśvarapraṇidāna) (PYS, II:1), Kundalini Yoga as taught by Yogi Bhajan does not condone extremes of asceticism or renunciation. He encouraged his students to marry, establish businesses, and be fully engaged in society. Rather than worshiping God, Yogi Bhajan’s teachings encourage students to train their mind to experience God.[16]Yogi Bhajan sometimes referred to the Sikh lifestyle as Raja Yoga, the yoga of living detached, yet fully engaged in the world.[16](pp188–89, 210–12, 222–39)

In respect of the rigor of his teachings, Yogi Bhajan claims kinship with other 20th century Sikh sadhu saints, such as Sant Baba Attar Singh, Sant Baba Nand Singh, and Bhai Randhir Singh.[16]:200–208

Yogi Bhajan‘s version of Kundalini Yoga has continued to grow in influence and popularity largely in the Americas, Europe, South Africa, Togo, Australia, and East Asia, with the training of many thousands of teachers.[17] It is popularized through books and videos, teachers such as Gurmukh, research by David Shannahoff-Khalsa, Dharma Singh Khalsa, Sat Bir Singh Khalsa and others, and through the publicity accorded it by various celebs who such as Madonna (entertainer), Demi Moore, Cindy Crawford, Russell Brand, Al Pacino, David Duchovny, and Miranda Kerr who are known, or have been known, to practice it. One 2013 article in a New York wellness magazine described Kundalini Yoga as “The Ultra-Spiritual Yoga Celebs Love.”[18][19]

Kundalini is the term for “a spiritual energy or life force located at the base of the spine”, conceptualized as a coiled-up serpent. The practice of Kundalini yoga is supposed to arouse the sleeping Kundalini Shakti from its coiled base through the 6 chakras, and penetrate the 7th chakra, or crown. This energy is said to travel along the ida (left), pingala (right) and central, or sushumna nadi – the main channels of pranic energy in the body.[20]

Kundalini energy is technically explained as being sparked during yogic breathing when prana and apana blends at the 3rd chakra (navel center) at which point it initially drops down to the 1st and 2nd chakras before traveling up to the spine to the higher centers of the brain to activate the golden cord – the connection between the pituitary and pineal glands – and penetrate the 7 chakras.[21]

Borrowing and integrating the highest forms from many different approaches, Kundalini Yoga can be understood as a tri-fold approach of Bhakti yoga for devotion, Shakti yoga for power, and Raja yoga for mental power and control. Its purpose through the daily practice of kriyas and meditation in sadhana are described a practical technology of human consciousness for humans to achieve their total creative potential. With the practice of Kundalini Yoga one is thought able to liberate oneself from one’s Karma and to realize one’s Dharma (Life Purpose).[22]

The practice of kriyas and meditations in Kundalini Yoga are designed to raise complete body awareness to prepare the body, nervous system, and mind to handle the energy of Kundalini rising. The majority of the physical postures focus on navel activity, activity of the spine, and selective pressurization of body points and meridians. Breath work and the application of bandhas (3 yogic locks) aid to release, direct and control the flow of Kundalini energy from the lower centers to the higher energetic centers.[23]

Along with the many kriyas, meditations and practices of Kundalini Yoga, a simple breathing technique of alternate nostril breathing (left nostril, right nostril) is taught as a method to cleanse the nadis, or subtle channels and pathways, to help awaken Kundalini energy.[24]