Health magazines around the world claim that yoga is for everybody… 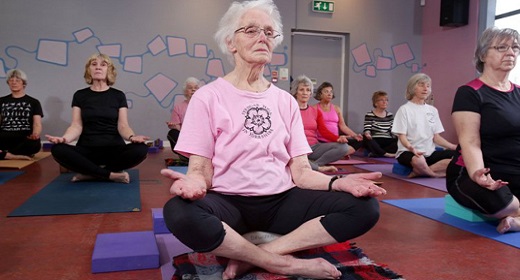 That’s because it really is. Another proof is Jean Dawson from England who has turned a hundred years old this month and is still going to her yoga class every Monday morning!

Newspapers wrote about her 3 years ago after she celebrated her 97th birthday and was still doing headstands and shoulder stands during her yoga practice. She no longer does them because of her blood pressure, but still attends her yoga class every week.

Mrs Dawson says that she didn’t take any sports for a long time when she was young. And it wasn’t until she was 67 when she started doing yoga.

Jean Dawson practises Iyengar Yoga which is characterized by the focus on  body alignment and by the use of yoga props such as yoga blocks and belts. Mrs Dawson says that yoga helped her cure her back pains, gave her flexibility, and stamina. She believes yoga is what helps her stay an active and energetic centenarian that she is.