by Ramana Maharsh: There is no doubt whatsoever that the universe is the merest illusion… 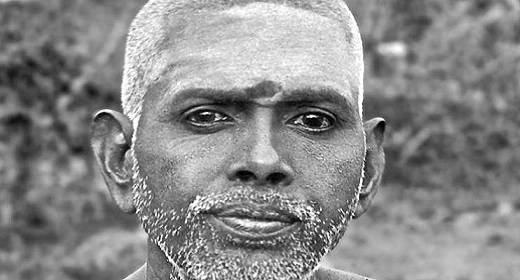 The principal purport of the Vedas is to make known the true Brahman, after showing the apparent universe to be false. It is for this purpose that the Vedas admit the creation of the world and not for any other reason. Moreover, for the less qualified persons creation is taught, that is the phased evolution of prakRRiti (primal nature), mahat tattva (the great intellect), tanmAtra-s (the subtle essences), bhUta-s (the gross elements), the world, the body, etc., from Brahman; while for the more qualified simultaneous creation is taught, that is, that this world arose like a dream on account of one’s own thoughts induced by the defect of not knowing oneself as the Self. Thus, from the fact that the creation of the world has been described in different ways it is clear that the purport of the Vedas rests only in teaching the true nature of Brahman after showing somehow or other the illusory nature of the universe. That the world is illusory, everyone can directly know in the state of Realization which is in the form of experience of one’s bliss-nature. (Ref. 1)

The scriptures declare that: ‘Duality is of the nature of illusion (mAyA) and only non-duality is the Supreme Truth.’ It is our experience that the diversity created by the consciousness ceases to exist in deep sleep in which the consciousness is absorbed in bliss. Those who are wise and discriminating know that the proverbial serpent has no existence apart from the substratum of the rope, nor the water of a mirage apart from the barren ground. It is our experience that when the mentality assumes the nature of the Self and becomes one with the attributeless supreme Self, mental manifestation ceases. All these magical creations which the illusion of the mind sets forth as the universe are found to have no real existence and become untrue when the Truth behind them is realized as Brahman itself. In the non-dual Brahman the threefold reality of seer, sight, and seen does not exist. It is the substratum into which ignorance, the root cause of the illusion of multiplicity, is absorbed, like darkness into light. Like oceans that endure to the end of the cycle of time, the Truth of Brahman remains single, complete, absolute purity, inactive, unqualified, changeless, formless. Where, then, can be talk of duality or diversity in the homogeneity of Brahman? (Ref. 2)

Bondage and liberation are creations of mAyA, superimpositions upon the Brahman imagined by the mind without any existence in reality. It is a fool who blames the sun for his own blindness. It is impossible to argue that bondage (saMsAra) is caused by the veiling power (tamas) of mAyA and liberation by its destruction, since there is no differentiation in the Self. Such an argument would lead to a denial of the truth of non-duality and an affirmation of duality. This would be contrary to the authority of the scriptures. How can there be any display of maya in non-dual Brahman, which is perfect stillness, one whole like the ether, spotless, actionless, unstained, and formless? The scriptures even proclaim aloud: ‘There is in truth no creation and no destruction; no one is bound, no one is seeking liberation, no one is on the way to deliverance. There are none liberated. This is the absolute truth.’ (Ref. 2)

Talk 399
M.: There are different methods of approach to prove the unreality of the universe. The example of the dream is one among them. jAgrat, svapna and suShupti are all treated elaborately in the scripture in order that the Reality underlying them might be revealed. It is not meant to accentuate differences among the three states. The purpose must be kept clearly in view. Now they say that the world is unreal. Of what degree of unreality is it? Is it like that of a son of a barren mother or a flower in the sky, mere words without any reference to facts? Whereas the world is a fact and not a mere word. The answer is that it is a superimposition on the one Reality, like the appearance of a snake on a coiled rope seen in dim light. But here too the wrong identity ceases as soon as the friend points out that it is a rope. Whereas in the matter of the world it persists even after it is known to be unreal. How is that? Again the appearance of water in a mirage persists even after the knowledge of the mirage is recognised. So it is with the world. Though knowing it to be unreal, it continues to manifest. But the water of the mirage is not sought to satisfy one’s thirst. As soon as one knows that it is a mirage, one gives it up as useless and does not run after it for procuring water.

D.: Not so with the appearance of the world. Even after it is repeatedly declared to be false one cannot avoid satisfying one’s wants from the world. How can the world be false?

M.: It is like a man satisfying his dream wants by dream creations. There are objects, there are wants and there is satisfaction. The dream creation is as purposeful as the jAgrat world and yet it is not considered real. Thus we see that each of these illustrations serves a distinct purpose in establishing the stages of unreality. The realised sage finally declares that in the regenerate state the jagrat world also is found to be as unreal as the dream world is found to be in the jagrat state. Each illustration should be understood in its proper context; it should not be studied as an isolated statement. It is a link in a chain. The purpose of all these is to direct the seeker’s mind towards the one Reality underlying them all. (Ref. 4)

Talk 651
A. W. Chadwick is copying the English translation of the Tamil Kaivalya Navaneeta. When he came across some technical terms in it and felt some difficulty in understanding them, he asked Sri Bhagavan about them. Sri Bhagavan said: “Those portions deal with theories of creation. They are not material because the shruti-s do not mean to set forth such theories. They mention the theories casually so that the enquirer may please himself if he be so inclined. The truth is that the world appears as a passing shadow in a flood of light. Light is necessary to see that shadow also. The shadow does not deserve any special notice, analysis or discussion. The book deals with the Self and that is its purpose. The discussions on creation may be omitted for the present.”

Later, Sri Bhagavan continued: “The Vedanta says that the cosmos springs into view simultaneously with the seer. There is no detailed process of creation. This is said to be yugapadsRRiShTi (instantaneous creation). It is quite similar to the creations in dream where the experiencer springs up simultaneously with the objects of experience. When this is told, some people are not satisfied for they are so rooted in objective knowledge. They seek to find out how there can be sudden creation. They argue that an effect must be preceded by a cause. In short, they desire an explanation for the existence of the world which they see around them. Then the shruti-s try to satisfy their curiosity by such theories of creation. This method of dealing with the subject of creation is called kramasRRiShTi (gradual creation). But the true seeker can be content with yugapadsRRiShTi – instantaneous creation.” (Ref. 4)

This Supreme Consciousness, say the Upanishads, existed alone in the beginning — when all this universe did not exist. It created out of itself the bodies of creatures, and Itself entered into them as soul. This becoming or creation is not to be taken as an event that happened actually; we shall see that presently. The purpose of these stories of creation in the ancient lore is to convey in a graphic manner the teaching, that the Self in us is just the Reality — that there is no individual soul.

If creation actually took place, it would follow that the Reality was broken into parts. That is absurd, as we have seen before. This is what the Sage tells us: “The Reality is neither broken into parts, nor does It suffer limitation. It only seems to be so. The mind it is that causes the appearance of parts, by falsely identifying It with bodies of sheaths and thus limiting It. The mind imagines the Reality as finite, thinking itself to be finite. These limitations and divisions are in the mind alone. But the mind has no existence apart from the Self. A jewel made of gold is not quite the same as gold, because it is gold with a name and a form super-added. But it is not other than gold. Mind is just a mysterious power of the Self, by which the One Self appears as many. Only when the mind rises, do the three — God, the soul and the world — appear. In sleep the three are not seen nor thought of.”

This is just what is known in Advaitic metaphysics as the Truth of Non-becoming — ajAti siddhAnta — which is found definitely and categorically stated by Gaudapada, the author of the Mandukya Karikas, on which Sage Shankara has written a lucid commentary. Shankara’s own writings are in perfect agreement with it. And our Sage has made it his own. It is said of him by a disciple: “Though the Holy One has given out truths modified according to the bias of questioners, yet he teaches the Truth of Non-becoming as verified by his own experience of the Self.”* Also in the same work we find the clear enunciation of the Truth of Non-becoming, as follows: “There is no creation, nor destruction; there is no one that is bound; nor is there one that strives for Liberation, nor anyone that has attained that State. There is no mind, nor body, nor world, nor anyone called the ‘soul’; One alone exists, the pure, calm, unchanging Reality which has no second, and no becoming.”