With all the confusing labels on supermarket food, it is no wonder so many people find it hard to eat healthily. Here are the real meanings of the tricky terminology… 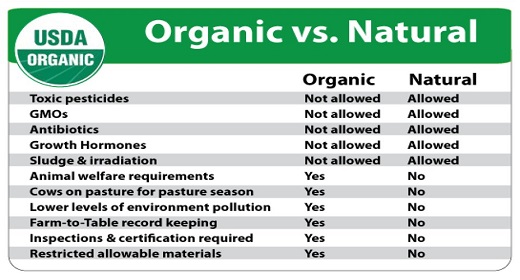 Organic
While you might assume organic is pretty straightforward, it actually is not. For example, you see many organic labels in the aisles of meat and dairy. As a general rule, organic foods are supposed to be from animals that have grazed in open areas and have not been treated with antibiotics or hormones. When it comes to produce, it is expected that it was not treated with pesticides or fertilizers.

That being said, you should realize that not all organic labels are created equal. When a product has a label that states “USDA organic,” it means the food is expected to be at least 95 percent organic. This is supposed to be certified by the USDA for foods bearing these labels.

Please note, foods that are instead labeled as “made with organic ingredients” only need to be at least 70 percent organically grown.

Natural
Natural is a vague description that the FDA allows to be used on pretty much any food product as long as it does not have added color, artificial flavors, or synthetic ingredients.

Various policy groups have approached the FDA about providing a specific definition for the term “natural” to detail if it includes GMO foods or not, but so far this has not been done.

GMO-Free/Non-GMO
GMO refers to genetically modified organisms. There has been a great deal of debate over the safety of GMOs, and many people choose non-GMO or GMO-free foods because they feel they are safer. Many studies have shown enough evidence of potential hazards from GMOs to warrant avoiding them whenever possible.

It is getting harder and harder to find foods that are not genetically modified or containing genetically-modified ingredients. For example, almost all corn and soybeans grown in the U.S. are GMO.

Currently, the FDA does not require labels to indicate if food is GMO or not. So the food companies can make that decision on their own according to federal law. However, some regulations are beginning to come about at the state government level. Vermont recently passed a law requiring GMO foods to be labeled as such beginning July 2016.

Gluten-Free
Gluten-free foods do not contain the proteins in barley, rye, or wheat. These foods are often sought after because gluten has been linked to many health issues including headaches, joint pain, stomach discomfort, and more.

Fortunately, the FDA does regulate this particular labeling term and ensures that foods labeled as manufactured or naturally gluten-free really are true to their claim.

Whole Grains
Whole-grain foods are supposed to come in a form that delivers the most antioxidants and fiber. Foods that boast they are whole grain might only contain a small amount of whole grain. The best way to know for sure is to choose foods that list “whole grain” or “whole rye” as the first ingredient in the list.