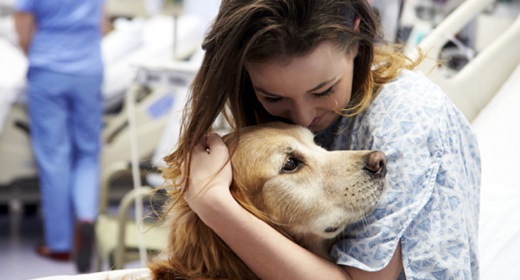 That’s why when the 9-year-old collie cross started behaving strangely, she assumed the worst.
“I thought at the time, Max was fading. He was nine-and-a-half and I was preparing myself for losing him,” she told BBC Earth.

Little did Burns know, Max was perfectly healthy. She, however, wasn’t and Max knew why.
“[Max] would come up and touch my breast with his nose, and back off so desperately unhappy…”

“[He] wouldn’t come with me, wouldn’t sit by me, wouldn’t sit on my lap,” Burns explained. ”The odd signs were when he would come up and touch my breast with his nose, and back off so desperately unhappy with such a sad look in his eyes.”

Burns had a lump in her breast, but because her last mammogram had come back clear, she didn’t think anything of it. That’s until she connected the lump with Max’s behavior.

Burns scheduled a follow-up mammogram and scan. Both came back negative. Still worried, she underwent a surgical biopsy. Cancer was detected.

According to BBC Earth, dogs can smell chemicals from cancerous tumors. In fact, as TheBlaze previously reported, research continues to confirm the accuracy with which dogs can smell cancer.

Burns said that when she went home after her tumor had been removed, things were quite different with Max.
“He put his nose across my breast to check where the operation had been and was wagging his tail and his eyes were happy,” she told BBC Earth. “I love Max and I owe him so much.”