Elon Musk Shares His Vision For The Future At TED

Elon Musk discussed his new project digging tunnels under LA, the latest from Tesla and SpaceX…

and his motivation for building a future on Mars in a recent conversation on the TED stage.

Recently, Elon Musk discussed his new project digging tunnels under LA, the latest from Tesla and SpaceX, to the development of a neural lace, and his motivation for building a future on Mars in conversation with TED’s Head Curator, Chris Anderson. The scale of Musk’s ambition and energy were impressively on display on stage. (See the full video below).

This is what an Elon Musk hobby looks like.

Musk and Anderson began the discussion with one of the newest of Musk’s ‘hobbies,’ The Boring Company. The venture aims to build s network of tunnels under Los Angeles to help alleviate traffic congestion. As far a the ‘hobby’ title goes, Musk claims the project is only consuming “two or three percent” of his time.

“So a couple of key things that are important in having a 3D tunnel network. First of all, you have to be able to integrate the entrance and exit of the tunnel seamlessly into the fabric of the city. So by having an elevator, sort of a car skate, that’s on an elevator, you can integrate the entrance and exits to the tunnel network just by using two parking spaces. And then the car gets on a skate. There’s no speed limit here, so we’re designing this to be able to operate at 200 kilometers an hour,” states Musk.

Anderson gets Musk to confess that his Tesla Motors cars may actually increase traffic with their rapid adoption, and as self driving technology effects are expanded.

“There’s no real limit to how many levels of tunnel you can have,” explains Musk. “You can go much further deep than you can go up. The deepest mines are much deeper than the tallest buildings are tall, so you can alleviate any arbitrary level of urban congestion with a 3D tunnel network. This is a very important point. So a key rebuttal to the tunnels is that if you add one layer of tunnels, that will simply alleviate congestion, it will get used up, and then you’ll be back where you started, back with congestion. But you can go to any arbitrary number of tunnels, any number of levels.”

Tunneling offers advantages compared to other technologies like flying cars according to Musk, “There is a challenge with flying cars in that they’ll be quite noisy, the wind force generated will be very high. Let’s just say that if something’s flying over your head, a whole bunch of flying cars going all over the place, that is not an anxiety-reducing situation.”

Musk and Anderson also chatted about combining another of Musk’s engineering challenges, the Hyperloop with the tunnelling project.

There are benefits too. “In order to seal against the water table, you’ve got to typically design a tunnel wall to be good to about five or six atmospheres. So to go to vacuum is only one atmosphere, or near-vacuum. So actually, it sort of turns out that automatically, if you build a tunnel that is good enough to resist the water table, it is automatically capable of holding vacuum.”

The discussion then turned to Tesla’s latest offerings, including technical advances in self driving cars. “Our focus is heavily on having a vision neural net that’s very effective for road conditions.” The path for the car maker seems to be based on computer vision alone according to the CEO. “You can absolutely be superhuman with just cameras. Like, you can probably do it ten times better than humans would, just cameras.”

Musk claims the vehicle will be able to drive across the country unaided by the end of the year: “We should be able to go all the way from a parking lot in California to a parking lot in New York, no controls touched at any point during the entire journey.” 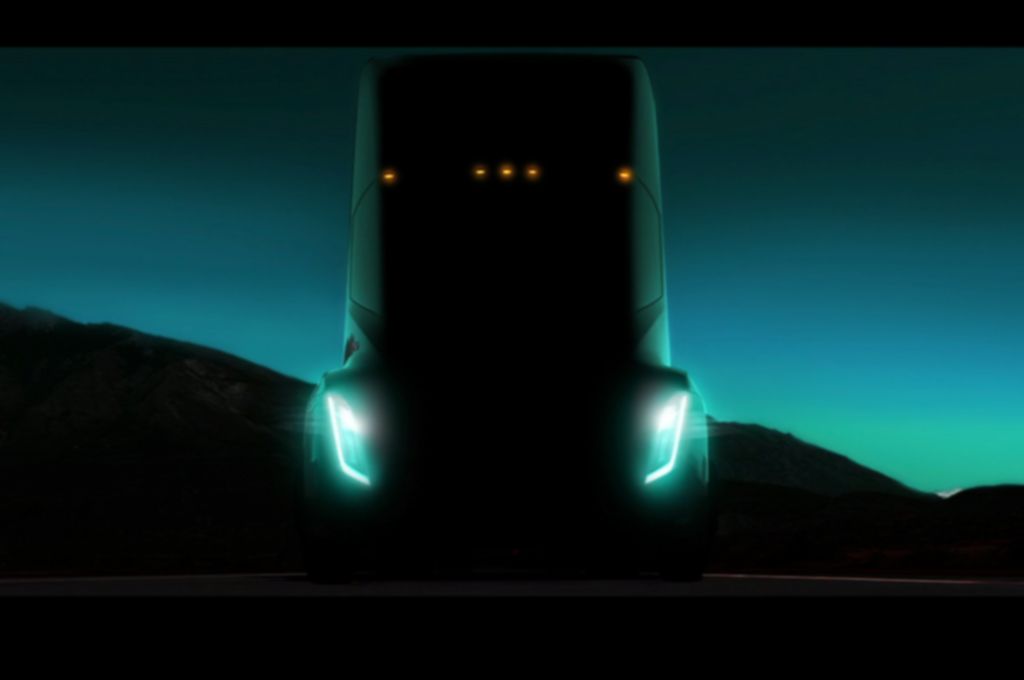 The technology will also be part of a new electric Semi truck that Tesla will be fully unveiling soon. The TED crowd just got a teaser image. The vehicle has high weight capability and a long range for heavy-duty trucking loads. According to Musk, the vehicle handles like a sports car.

Tesla’s Power Wall and solar roof tiles were then mentioned. Modestly Musk thinks adoption of the roof tiles may take 40-50 years. The discussion necessitated mention of the Gigafactory, the huge complex under construction where the batteries powering Tesla’s devices is being built.

Anderson questions, “What makes an exciting future is a future where we no longer feel guilty about energy. Help us picture this. How many Gigafactories, if you like, does it take to get us there?

Musk answers, “It’s about a hundred, roughly. It’s not 10, it’s not a thousand. Most likely a hundred.”

The far future concludes the talk, and Musk’s voice pattern switches from confident and technical to earnest and emotional. When he talks about a city on Mars, you can tell that is his real goal.

I think it’s important to have a future that is inspiring and appealing. I just think there have to be reasons that you get up in the morning and you want to live. Like, why do you want to live? What’s the point? What inspires you? What do you love about the future? And if we’re not out there, if the future does not include being out there among the stars and being a multiplanet species, I find that it’s incredibly depressing if that’s not the future that we’re going to have.

Importantly, while some progress in technology is essentially inevitable, Musk does not see humanity becoming muliplanetary as assured.

Then there’s becoming a multiplanet species and space-faring civilization. This is not inevitable. It’s very important to appreciate this is not inevitable. The sustainable energy future I think is largely inevitable, but being a space-faring civilization is definitely not inevitable. If you look at the progress in space, in 1969 you were able to send somebody to the moon. 1969. Then we had the Space Shuttle. The Space Shuttle could only take people to low Earth orbit. Then the Space Shuttle retired, and the United States could take no one to orbit. So that’s the trend. The trend is like down to nothing. People are mistaken when they think that technology just automatically improves. It does not automatically improve. It only improves if a lot of people work very hard to make it better, and actually it will, I think, by itself degrade, actually. You look at great civilizations like Ancient Egypt, and they were able to make the pyramids, and they forgot how to do that. And then the Romans, they built these incredible aqueducts. They forgot how to do it.

Having written this synopsis, it is hard to believe that all of these projects spring from the mind of one man. Even Anderson admits they never got to discuss OpenAI, and Neuralink. What’s more, Musk may only be getting started.