by Paramahansa Yogananda: The following is an excerpt from Bringing Cosmic Consciousness To The West… 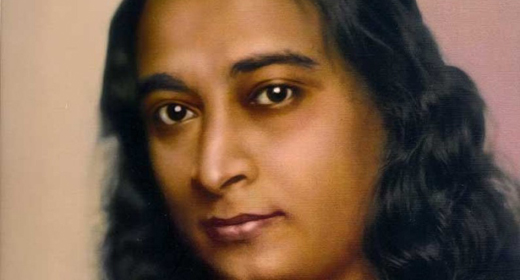 “I am here, Guruji.” My shamefacedness spoke more eloquently for me.

“Let us go to the kitche and find something to eat.” Sri Yukteswar’s manner was as casual as though hours and not days had separated us.

“Master, I must have disappointed you by my abrupt departure from my duties here; I thought you might be angry with me.”

“No, of course not! Wrath springs only from thwarted desires. I do not expect anything from others, so their actions cannot be in opposition to wishes of mine. I would not use you for my own ends; I am happy only in your own true happiness.”

“Sir, one hears of divine love in a vague way, but today I am indeed having a concrete example of it from your angelic self! In the world, even a father does not easily forgive his son if he leaves his parent’s business without warning. But you show not the slightest vexation, though you must have been put to great inconvenience by the many unfinished tasks I left behind.”

We looked into each other’s eyes, where tears were shining. A blissful wave engulfed me; I was conscious that the Lord, in the form of my guru, was expanding the small ardors of my heart into the vast reaches of cosmic love.

A few mornings later I made my way to Master’s empty sitting room. I planned to meditate, but my laudable purpose was unshared by disobedient thoughts. They scattered like birds before the hunter.

I felt rebellious as my thoughts. “Master always urges me to meditated,” I muttered to myself. “He should not disturb me when he knows why I came to his room.”

He summoned me again; I remained obstinately silent. The third time his tone held rebuke.

“Sir, I am meditating,” I shouted protestingly.

“I know how you are meditating,” my guru called out, “with your mind distributed like leaves in a storm! Come here to me.”

Thwarted and exposed, I made my way sadly to his side.

“Poor boy, mountains cannot give you what you want.”

Master spoke caressingly, comfortingly. His calm gaze was unfathomable. “Your heart’s desire shall be fulfilled.”

Sri Yukteswar seldom indulged in riddles; I was bewildered. He struck gently on my chest above the heart.

My body became immovably rooted; breath was drawn out of my lungs as if by some huge magnet. Soul and mind instantly lost their physical bondage and streamed out like a fluid piercing light from my every pore. The flesh was as though dead, yet in my intense awareness I knew that never before had I been fully alive. My sense of identity was no longer narrowly confined to a body but embraced the circumambient atoms. People on distant streets seemed to be moving gently over my own remote periphery. The roots of plants and trees appeared through a dim transparency of the soil; I discerned the inward flow of their sap.

The whole vicinity lay bare before me. My ordinary frontal vision was now changed to a vast spherical sight, simultaneously all-perceptive. Through the back of my he ad I saw men strolling far down Rai Ghat Lane, and noticed also a white cow that was leisurely approaching. When she reached the open ashram gate, I observed her as though with my two physical eyes. After she had passed behind the brick wall of the courtyard, I saw her clearly still.

All objects within my panoramic gaze trembled and vibrated like quick motion pictures. My body, Master’s, the pillared courtyard, the furniture and floor, the trees and sunshine, occasionally became violently agitated, until all melted into a luminescent sea; even as sugar crystals, thrown into a glass of water, dissolve after being shaken. The unifying light alternated with materializations of form, the metamorphoses revealing the law of cause and effect in creation.

An oceanic joy broke upon calm endless shores of my soul. The Spirit of God, I realized, is exhaustless Bliss; His body is countless tissues of light. A swelling glory within me began to envelop towns, continents, the earth, solar and stellar systems, tenuous nebulae, and floating universes. The entire cosmos, gently luminous, like a city seen afar at night, glimmered within the infinitude of my being. The dazzling light beyond the sharply etched global outlines faded slightly at the farthest edges; there I saw a mellow radiance, ever undiminished. It was indescribably subtle; the planetary pictures were formed of a grosser light.

The divine dispersion of rays poured from an Eternal Source, blazing into galaxies, transfigured with ineffable auras. Again and again I saw the beams condense into constellations, then resolve into sheets of transparent flame. By rhythmic reversion, sextillion worlds passed into diaphanous luster, then fire became firmament.

I cognized the center of the empyrean as a point of intuitive perception in m yheart. Irradiating splendor issued from my nucleus to every part of the universal structure. Blissful amrita, nector of immortality, pulsated through me with a quicksilver-like fluidity. The creative voice of God I heard resounding as Aum, the vibration of the Cosmic Motor.

Suddenly the breath returned to my lungs. With a disappointment almost unbearable, I realized that my infinite immensity was lost. Once more I was limited to the humiliating cage of a body, not easily accommodative to the Spirit. Like a prodigal child, I had run away from my macrocosmic home and had imprisoned myself in a narrow microcosm.

My guru was standing motionless before me; I started to prostrate myself at his holy feet in gratitude for his having bestowed on me the experience in cosmic consciousness that I had long passionately sought. He held me upright and said quietly: “You must not get overdrunk with ecstasy. Much work yet remains for you in the world. Come, let us sweep the balcony floor; then we shall walk by the Ganges.”

I fetched a broom; Master, I knew, was teaching me the secret of balanced living. The soul must stretch over the cosmogonic abysses while the body performs its daily duties.

When Sri Yukteswar and I set out later for a stroll, I was still entranced in unspeakable rapture. I saw our bodies as two astral pictures, moving over a road by the river whose essence was sheer light.

“It is the Spirit of God that actively sustains every form and force in the universe; yet He is transcendental and aloof in the blissful uncreated void beyond the worlds of vibratory phenomena,” Master explained. “Those that attain Self-realization on earth live a similar twofold existence. Conscientiously performing their work in the world, they are yet immersed in an inward beatitude…

A master bestows the divine experience of cosmic consciousness when his disciple, by meditation, has strengthened his mind to a degree where the vast vistas would not overwhelm him. Mere intellectual willingness or open-mindedness is not enough. Only adequate enlargement of consciousness by yoga practice and devotional bhakti can prepare one to absorb the liberating shock of omnipresence.