by Lisa Elaine Held: You should probably just go tell your boss now that you’re going to have to leave early for a “doctor’s appointment”—like every Friday afternoon from now on… 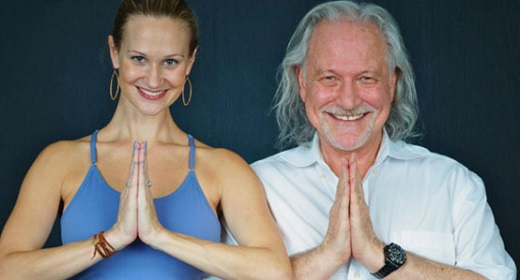 Why? Because Sarah Platt-Finger’s Sweat and Samadhi class at New York City’ ISHTA Yoga knocks out the week’s stressed deadlines and frantic meetings in one 90-minute yoga swoop.

The class begins with an hour of precise, challenging vinyasa flow with a strong emphasis on breath. Platt-Finger, Alan Finger’s wife and a co-owner of ISHTA, is an engaging teacher who peppers the class with clear, actionable insights, all of which sound like they’re being delivered while she’s smiling the biggest smile ever.

She also gives thoughtful adjustments that really help: My hips were particularly tight, and she seemed to intuit that fact as soon as we moved into pigeon pose. Her gentle touch helped me go deeper, without feeling dangerous.

For the second part of class, you switch gears into restorative mode, reaching for the prop package you’re given upon arrival—two blocks, two blankets, small bolster, large bolster, and eye pillow.

Our first restorative pose was a supported child’s pose that involved draping your body over a large bolster. During the second pose, I’d already reached such a deep level of relaxation that when Finger gently touched my shoulders to open them up, I felt like I was waking up from a deep sleep (I may, actually, have nodded off).

And the balanced, blissed-out state lasted long into the weekend—and maybe even slightly into the start of the work week. —Lisa Elaine Held

Who’s it for: Type A workaholics with stress to spare