by Dr. Alberto Villoldo: There is rarely such a thing as a new baby… 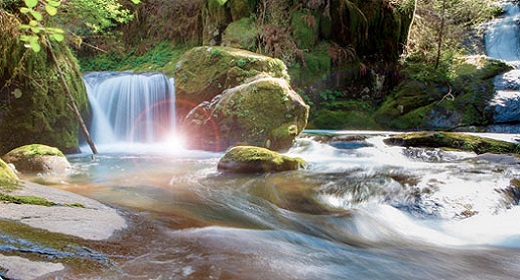 The little one, more often than not, is an old soul — sometimes even older than the mother who delivered him. Sometimes it takes a shaman to cut the cords that bind a mother and son as their spirits traverse the centuries.

Energetic cords keep us attached to people with whom we once shared pain or dreams. And just as the maternal cord transports nutrient-rich blood to the child, the energetic cords that link us to others are rich in emotion and feeling. But like that first cord, they must be cut in order for us to come into ourselves, and to develop healthy relationships with those who love us, and sometimes hate us.

Nathan thought he found me by mistake, but I knew better. My clients are meant to find me, as I am meant to find them. I know Spirit is operating when this happens. He had forgotten to send the opt-out card back to his book club, and my book Shaman Healer Sage showed up on his doorstep.

Nathan had a long-standing interest in shamanism, but told me the books he read always left him dissatisfied. After reading Shaman Healer Sage, he made an appointment to come to my office.

This was not the usual client that sat before me: More than the wealth of knowledge and wisdom coming out of advanced years, it was his advanced state of soul. We launched almost immediately into an extraction of a crystallized energy, which I normally don’t do in an initial session.

“There’s a spear protruding from your chest,” I told him. Nathan hardly batted an eye at this possibility. He was with me each step of the way, and at times took the lead. He drew me into his past, and I took him deeper into memory.

As he journeyed, I sensed an urgent need for him to turn around.

“Look behind you,” I demanded as I left my chair, and rushed to his side. I rested my hand on his shoulder, but he was unaware of his surroundings and my presence. I saw through his eyes the scene unfolding before him, and fully grasped what he was experiencing.

A young boy, Native American, just beginning to feel his courage and strength, stood by a sparkling river, its banks draped with newly green branches. As one, we watched the current, made swift with spring rains. The water’s surface glittered with diamonds. So beautiful!

A sudden blow from behind pierced through to my chest. Pain beyond enduring closed over my consciousness and what had been so beautiful receded into a void as black as death. Who would do such a thing? Why me? Why now?

“Turn around! Turn around!” I heard a message coming from somewhere a second before I fell into the river of diamonds. I turned as I fell and saw who wanted to kill me.

“Ahhh! Not you! Not you!” Sobs pour out like bright, hot blood from a fresh wound.

“Nathan…It’s all right now,” I said. He gradually reentered the present, fighting for breath. “You’re okay. You’re safe. That time is over. That place is gone.”

When I asked who he saw when he turned around, his answer tumbled out hesitantly: “Mother.” One cold hard fact, and one cold hard word. Mother!

I prepared to extract the crystallized energy left behind by that spear as he stood on unsteady feet, tremors moving through his body. I briefly described my actions as I gripped the spear by its shaft and very carefully turned and twisted until I could pull it out whole.

After I restored balance to his luminous energy field, we talked about his harrowing experience as White Eagle, a member of the Cherokee tribe, and son of a sorceress. During our second session, months later, I had an uneasy feeling as I scanned Nathan’s luminous body.

It was almost as if it had seen me. I could sense it: the entity. It was brazen, willing to be seen, and confident in its own control and power. It was unnerving. I looked at Nathan and knew an extraction was critical to get rid of this intrusive entity. But first, it had to be named. Naming a thing, knowing its nature, reduces its power. And this entity had a familiar name. It was the one with the spear. Mother.