by Sean O’Kane and Andrew J. Hawkins: But it only went 70 mph…

Hyperloop One completed the first full-scale test of its hyperloop technology in a vacuum environment on May 12th, the company announced today. In the test, the company’s hyperloop vehicle — which uses magnetic levitation, or mag-lev, technology — pulled 2 Gs while reaching 70 miles per hour down the length of the company’s test track in Nevada.

Hyperloop One also shared images of its new pod with The Verge. The aerodynamic pod is 28 feet long and constructed of structural aluminum and carbon fiber. Using electromagnetic propulsion and mag-lev technology, it’s designed to carry both cargo and human passengers at near supersonic speeds, Hyperloop One says.

Hyperloop One posted this video of the low-speed test. The company’s co-founder Shervin Pishevar and chief engineer Josh Giegel were also on CBS This Morning to talk up their accomplishment.

Pishevar described the test as the company’s “Kitty Hawk moment,” drawing a direct analogy with the Wright Brothers and their “first in flight” milestone. (Of course, Pishevar isn’t the only Silicon Valley big wig to draw on inspiration from the Wright Brothers; Google co-founder Larry Page has named his “flying car” startup Kitty Hawk.)

The company is now entering the next phase of testing with the goal of reaching 250 mph. A concept first conceived by Elon Musk in 2013, the hyperloop theoretically can send aluminum pods filled with passengers or cargo through a nearly airless tube at speeds of up to 750 mph. 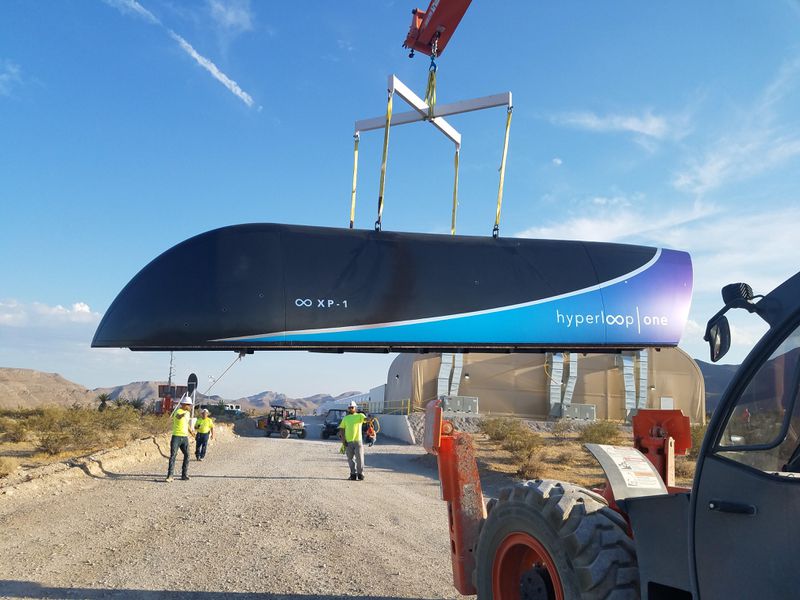 “Hyperloop One has accomplished what no one has done before by successfully testing the first full scale Hyperloop system,” Pishevar said in a statement. “By achieving full vacuum, we essentially invented our own sky in a tube, as if you’re flying at 200,000 feet in the air.”

“WE ESSENTIALLY INVENTED OUR OWN SKY IN A TUBE.”

By conducting the test in private, Hyperloop One appears to be toning down some of its public rhetoric since the company’s much-hyped first test lasted only about two seconds. Conducted in May 2016, the test featured a 1,500-pound metal sled shooting down a short track before crashing into a pile of sand.

In October, Hyperloop One began construction of its 500-meter-long “DevLoop” test track, which became operational last April. The company says it will continue to run tests at DevLoop in the coming months to “validate its next-generation components and software.” The next phase of testing will showcase the Pod gliding along a longer track at faster speeds.

The company’s executives have been traveling the world in recent months, selling its vision of near-supersonic travel to government officials and investors. Despite being based in LA and building its test track in Nevada, Hyperloop One has mostly focused its attention outside the US. The company has feasibility studies underway in the United Arab Emirates, Finland and Sweden, the Netherlands, Switzerland, Moscow, and the UK. The company is also eyeing less than a dozen regions in the US as possible future locations for its ultrafast, futuristic transportation system.

To be sure, the hyperloop has a host of challenges to overcome before it can claim to revolutionize transportation. It’s very difficult to build anything new in the US, especially something as huge and enormously expensive as the hyperloop. This is an entirely new technology, built from scratch without any of the right-of-way allowances, land acquisitions, or regulatory approvals that other modes of transportation, like the railway, currently enjoy. Suffice, it will be many years before you are able to sit back and let the hyperloop whisk you away to your destination at its promised speeds.