Center Of The Storm

by Shannon Wianecki: Lama Surya Das on walking an enlightened path in the modern world… 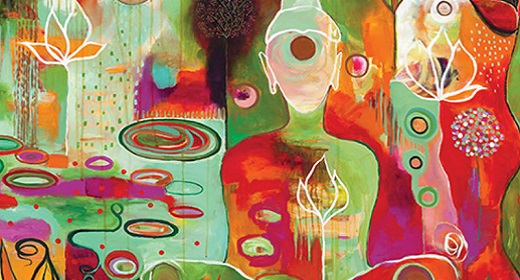 Lama Surya Das riffs on enlightenment with a native New Yorker’s accent and attitude. When he first encountered Buddhism in the late 1960s, the Jewish-born teenager from Long Island dove in heart-first, devoting four decades of his life to spiritual study, practice, and teaching. Nicknamed “the Western Lama” by the Dalai Lama, he’s a best-selling author and the founder of the Dzogchen Center. A revered spokesman for American Buddhism, he tackles life’s urgent questions on his blog askthelama.com.

What does it mean to be an American Buddhist?

Being an American Buddhist means practicing what Buddha taught but in a modern place. Maybe you don’t sit cross-legged on the floor, shave your head, or wear a yellow robe in a monastery. You may. But Western Buddhism is often more lay-oriented, integrated with daily life and not separated like in the East. It means awakening one’s self in the world, becoming a spiritual activist, a bodhisattva who is healing the world, restoring it to balance and wholeness. That sounds good, but how? The great spiritual traditions, the eightfold path, the Buddhist practices—mindfulness and meditation—can help you become a better whatever-you-are. As I always say, it’s better to become a Buddha than a mere Buddhist.

If you strip away all of the ceremony or accouterments, how do you know you’re still practicing Buddhism?

Being a good person is more important than the “ism.” What are the active ingredients of Buddhism? It’s not what color the robes are. They could be helpful, but the costume is not the person. The Dalai Lama says it comes down to wisdom and compassion. The four truths of Buddhism’s eightfold path involve action and behavior, transforming your attitude: less selfishness, more generosity and patience. Mindfulness. Clarity. And on the deepest level, being in touch with the timeless. We’re Buddhas by nature; we just have to awaken to that fact. That’s the meaning of enlightenment.

We’re like bubbles in the sea. When the bubble merges with the sea, it realizes that it’s never been apart. It’s H2O all the way through. So you don’t have to slay your ego; you just have to see through your separateness. You’ll still have a healthy, individuated sense of self, but you’re not an egoist.

Having a teacher helps. A spiritual elder helps prevent self-deception, one of the most pernicious pitfalls on the path. Teachers help you see your highest self, your Buddha nature, rather than just your human foibles. When you see how they love you unconditionally, you can start to love yourself unconditionally.

How do you cultivate stillness in the modern world?

It’s always been a challenge to live a spiritual life. Look back into history—people didn’t have Facebook, but they had marauding hordes, child mortality, and 40-year life spans. We have a lot of advantages. Ancient wisdom has always told us that life is long enough for those who know how to live.

So, find your center wherever you are, whether you have interruptions by social media, your kids, or an elder you’re taking care of. Look inside; look deeper to find the eye of the hurricane. The axis of the wheel doesn’t change while the spokes turn. Maybe you have to stop what you’re doing to have a moment of sublime silence—whatever the noise level—to be with God and find the silence that is always there, in your heart cave.