Donate To The One America Appeal

Hurricanes Harvey, Irma and Maria have brought terrible devastation— but also brought out the best in humanity… 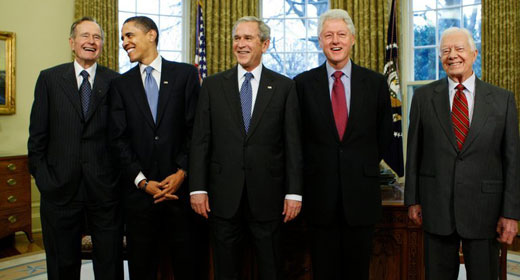 As former Presidents, we wanted to come together to help our fellow citizens in Texas, Florida and the Caribbean as they recover and rebuild.

Please give whatever you can. Every cent donated through the One America Appeal will help the victims recover. Thank you.

HURRICANE HARVEY: BY THE NUMBERS

Every storm is unique, but a look at Hurricane Harvey’s unprecedented intensity helps explain why the One America Appeal came to life.

According to the National Weather Service, Harvey dropped a total 51.88 inches of rain near Mont Belvieu just east of Houston. No other storm in recorded history has dropped more rain on the continental United States.

Some estimates are that Harvey dumped 27 trillion gallons on land, which according to the Houston Chronicle is enough to fill the Astrodome 86,000 times.

Research by the Washington Post suggests that, if Hurricane Harvey’s precipitation was confined only to where rain fell during Hurricane Katrina in 2005, it would be 128 feet deep.

What is the One America Appeal?

The One America Appeal is a joint appeal that was originally launched by all five living former American Presidents to encourage their fellow citizens to support recovery efforts from Hurricane Harvey — which inundated the Texas Gulf Coast with unprecedented flooding. This special appeal has been expanded to include areas most affected by Hurricanes Irma and Maria.

If I make a donation today, where does my money go?

All donations made today will go to help victims of Hurricane Harvey in Texas and Hurricane Irma in Florida. In Texas, monies will go to the Hurricane Harvey Relief Fund focusing on the greater Houston region, and the Rebuild Texas Fund assisting communities across the state. In Florida, monies will go to the Florida Disaster Fund, which is the state’s official private fund to assist the state’s communities as they respond to and recover from destructive storms. In the Caribbean, donations will be distributed to Unidos Por Puerto Rico launched by the office of First Lady Beatriz Rosselló together with private sector coalition; and the Fund for the Virgin Islands which was established 25 years ago by the Community Foundation of the Virgin Islands for relief efforts.

Can I mail a check?

Yes. Checks to the One America Appeal may be mailed to:

*Checks should be payable to “GBPLF One America Appeal”

Is the One America Appeal a new fund?

No. All funds collected through the One America Appeal will go into a special account at the George H. W. Bush Presidential Library Foundation, a tax-exempt 501(c)(3) organization, to ensure 100 cents out of every dollar donated goes to hurricane recovery. All monies collected will be distributed immediately to the designated recovery funds. All donations are also tax-deductible.

Are public tax dollars involved in this project?

No. This is a private effort led by distinguished private citizens to raise private dollars that will supplement ongoing relief and recovery efforts underway at all levels of government.

What if I wish to make a donation through a donor-advised fund?

The following information is required to make such a gift:

What if I didn’t receive a receipt?

All reciepts are sent via email from noreply@oneamericaappeal.org. Please check your spam folder.