This Tiny Country Feeds The World

by Frank Viviano: The Netherlands has become an agricultural giant by showing what the future of farming could look like… 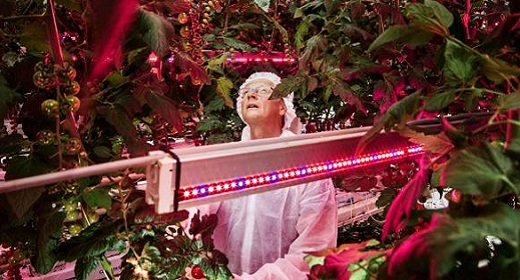 In a potato field near the Netherlands’ border with Belgium, Dutch farmer Jacob van den Borne is seated in the cabin of an immense harvester before an instrument panel worthy of the starship Enterprise.

From his perch 10 feet above the ground, he’s monitoring two drones—a driverless tractor roaming the fields and a quadcopter in the air—that provide detailed readings on soil chemistry, water content, nutrients, and growth, measuring the progress of every plant down to the individual potato. Van den Borne’s production numbers testify to the power of this “precision farming,” as it’s known. The global average yield of potatoes per acre is about nine tons. Van den Borne’s fields reliably produce more than 20.

That copious output is made all the more remarkable by the other side of the balance sheet: inputs. Almost two decades ago, the Dutch made a national commitment to sustainable agriculture under the rallying cry “Twice as much food using half as many resources.” Since 2000, van den Borne and many of his fellow farmers have reduced dependence on water for key crops by as much as 90 percent. They’ve almost completely eliminated the use of chemical pesticides on plants in greenhouses, and since 2009 Dutch poultry and livestock producers have cut their use of antibiotics by as much as 60 percent. 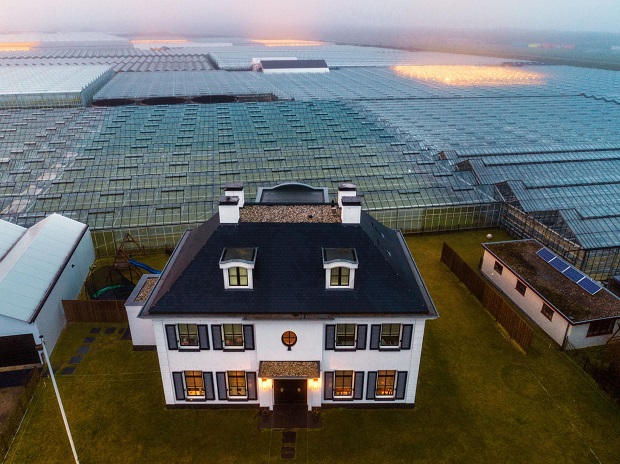 A sea of greenhouses surrounds a farmer’s home in the Westland region of the Netherlands. The Dutch have become world leaders in agricultural innovation, pioneering new paths to fight hunger. 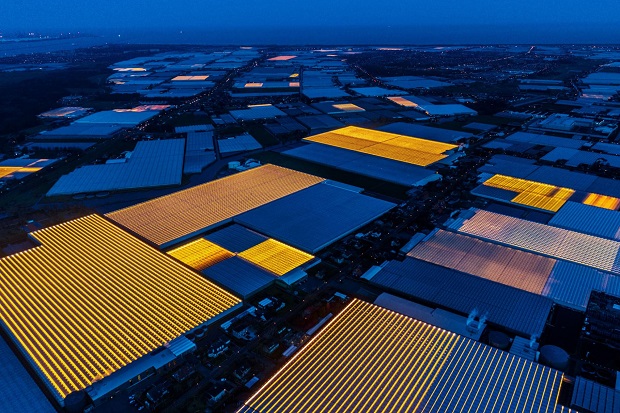 Furrows of artificial light lend an otherworldly aura to Westland, the greenhouse capital of the Netherlands. Climate-controlled farms such as these grow crops around the clock and in every kind of weather.

One more reason to marvel: The Netherlands is a small, densely populated country, with more than 1,300 inhabitants per square mile. It’s bereft of almost every resource long thought to be necessary for large-scale agriculture. Yet it’s the globe’s number two exporter of food as measured by value, second only to the United States, which has 270 times its landmass. How on Earth have the Dutch done it?

Seen from the air, the Netherlands resembles no other major food producer—a fragmented patchwork of intensely cultivated fields, most of them tiny by agribusiness standards, punctuated by bustling cities and suburbs. In the country’s principal farming regions, there’s almost no potato patch, no greenhouse, no hog barn that’s out of sight of skyscrapers, manufacturing plants, or urban sprawl. More than half the nation’s land area is used for agriculture and horticulture.

Banks of what appear to be gargantuan mirrors stretch across the countryside, glinting when the sun shines and glowing with eerie interior light when night falls. They are Holland’s extraordinary greenhouse complexes, some of them covering 175 acres.

These climate-controlled farms enable a country located a scant thousand miles from the Arctic Circle to be a global leader in exports of a fair-weather fruit: the tomato. The Dutch are also the world’s top exporter of potatoes and onions and the second largest exporter of vegetables overall in terms of value. More than a third of all global trade in vegetable seeds originates in the Netherlands. 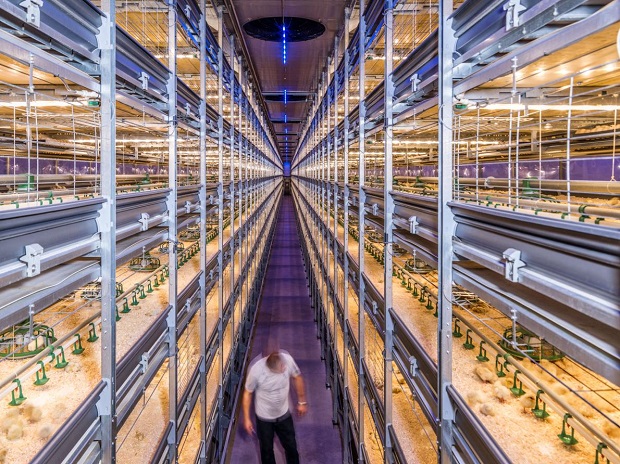 With demand for chicken increasing, Dutch firms are developing technology to maximize poultry production while ensuring humane conditions. This high-tech broiler house holds up to 150,000 birds, from hatching to harvesting.

The brain trust behind these astounding numbers is centered at Wageningen University & Research (WUR), located 50 miles southeast of Amsterdam. Widely regarded as the world’s top agricultural research institution, WUR is the nodal point of Food Valley, an expansive cluster of agricultural technology start-ups and experimental farms. The name is a deliberate allusion to California’s Silicon Valley, with Wageningen emulating the role of Stanford University in its celebrated merger of academia and entrepreneurship.

Ernst van den Ende, managing director of WUR’s Plant Sciences Group, embodies Food Valley’s blended approach. A renowned scholar with the casual manner of a barista at a hip café, van den Ende is a world authority on plant pathology. But, he says, “I’m not simply a college dean. Half of me runs Plant Sciences, but the other half oversees nine separate business units involved in commercial contract research.” Only that mix, “the science-driven in tandem with the market-driven,” he maintains, “can meet the challenge that lies ahead.”

The challenge? Put in bluntly apocalyptic terms, he says, the planet must produce “more food in the next four decades than all farmers in history have harvested over the past 8,000 years.”

That’s because by 2050, the Earth will be home to as many as 10 billion people, up from today’s 7.5 billion. If massive increases in agricultural yield are not achieved, matched by massive decreases in the use of water and fossil fuels, a billion or more people may face starvation. Hunger could be the 21st century’s most urgent problem, and the visionaries working in Food Valley believe they have found innovative solutions. The wherewithal to stave off catastrophic famine is within reach, van den Ende insists. His optimism rests on feedback from more than a thousand WUR projects in more than 140 countries and on its formal pacts with governments and universities on six continents to share advances and implement them.