by Richard Feloni: Tony Robbins, right, has worked with his personal trainer Billy Beck III for the last four years. Beck has trained professional athletes and Dwayne “The Rock” Johnson… 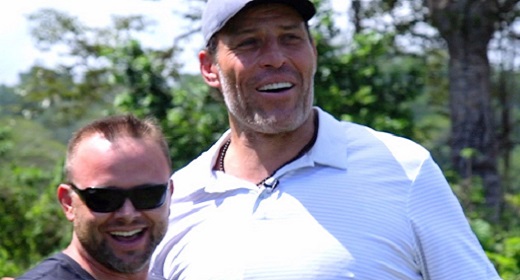 Tony Robbins is 57 years old but he’s busier than he’s ever been.

The world’s most famous life and business coach regularly puts in 16 hour work days and has an average of 60 events around the world annually, with a smattering of media tours. On top of that, Robbins is invested in and advises 33 companies, running 12 of them, and has a small batch of personal clients like billionaire investor Paul Tudor Jones.

As he got into his 50s, he realized his ambitions were increasing and that he’d need an edge to maintain the energy that came easier when he was younger. Four years ago he hired Billy Beck III as his full-time personal trainer. Beck is renowned in his industry and has worked with Dwayne “The Rock” Johnson, NFL and NHL players, boxers, and UFC fighters. He’s approached his work with Robbins the same way he would any of the athletes he’s trained, and he’s customized his regimens for Robbins’ metabolism and demands.

Business Insider recently traveled to Robbins’ Fiji resort Namale, where he was hosting the winners of Shopify’s Build a Bigger Business Contest, and had Beck share with us his nutrition plan for Robbins. Robbins isn’t exactly a foodie, and prefers to keep things simple, but there is some room for variations on meal preparations.

Beck developed an “adrenal support cocktail” composed of a shake made of greens powder, vitamin C, and antioxidants along with capsules of methylated B vitamins mixed with additional nutrients.

The greens powder is a mixture of fruits and vegetables and is rich with vitamins A and C, antioxidants and probiotics. There are several of these powders on the market, from makers like Nested Naturals and Athletic Greens. We tried the “adrenal support cocktail” and it was surprisingly tasty, with a pleasant citrus flavor.Graham Flanagan/Business Insider

Robbins has a simple breakfast of free-range eggs accompanied by organic coconut bread.

For lunch, it’s a large salad of greens and avocado topped with cold-pressed extra virgin olive oil, lemon juice, and a sprinkle of Himalayan sea salt. Robbins goes with a protein-rich meal-replacement shake to keep his metabolism going.

Robbins has a dinner of a “clean organic protein source” (i.e. one without hormones, pesticides, or heavy metals) accompanied by roasted potatoes, asparagus, and broccoli, cooked with coconut oil or extra virgin olive oil.

Robbins has experimented with his diet over his life, and has tried going vegan and having a fish-heavy diet. He told us he quit the latter when a blood test revealed all of that fish left him with a dangerous level of mercury in his body. Beck decided that Robbins could try incorporating meat and seafood back into his diet, with more of a focus on balance.

As the day winds to an end, Robbins has another protein-rich meal-replacement bar.