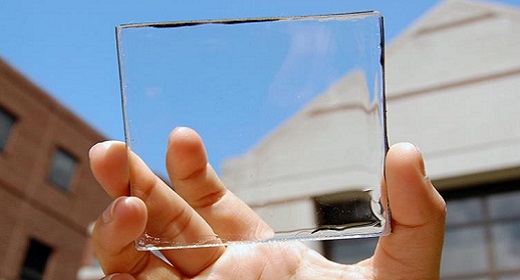 A new generation of see-through solar cell technology could soon be used to harvest the massive energy potential of building and car windows, cell phones as well as other objects with a transparent surface.

“We will see commercial products become available over the next few years,” Richard Lunt, an associate professor of Chemical Engineering and Materials Science at MSU, tells Newsweek. “We are just beginning to hit performance metrics that make sense to scale up.”

Lunt and his MSU colleagues have previously pioneered solar technology that collects energy from invisible wavelengths of light so that it doesn’t disrupt the view when placed over a window.

The system uses materials to pick up ultraviolet and near infrared wavelengths, which are guided to the edge of the surface they are on for it to be converted into electricity by thin strips of photovoltaic solar cells.

Ultra-thin, transparent solar panels could potentially be retrofitted onto skyscrapers and smartphones, meaning windows and screens would not need to be replaced in order to generate electricity from buildings or electronic devices.

“While adoption of conventional photovoltaics on rooftops and in solar farms has grown rapidly in the last decade, there is still plenty of opportunity for expansion,” theNature Energy paper states.

“See-through solar technologies with partial light transmission developed over the past 30 years have initiated methods of integration not possible with conventional modules.”

The untapped electricity potential of this energy source, the researchers note, is vast. An estimated 5 billion to 7 billion square meters of glass surface in the United States could be used to meet 40 percent of the country’s energy demand, or “close to 100 percent” if energy storage is improved.

“That is what we are working towards,” Lunt says. “Traditional solar applications have been actively researched for over five decades, yet we have only been working on these highly transparent solar cells for about five years.

“Ultimately, this technology offers a promising route to inexpensive, widespread solar adoption on small and large surfaces that were previously inaccessible.”