by Deepak Chopra, M.D.: Cancer is viewed as a unique kind of threat because of the dread it inspires… 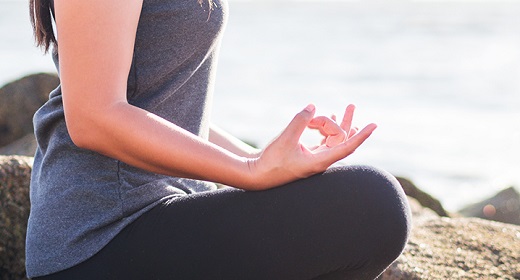 but in many ways we’ve reached a tipping point where hope and optimism are replacing fear. A healing lifestyle that includes meditation, dietary changes, and a more serious approach to stress is key. Let me go into some detail because cancer is such an important, worrisome issue in everyone’s life, particularly as you grow older.

In its 2017 report on cancer rates, the American Cancer Society reported that overall cancer deaths declined by 25 percent between a peak in 1991 to 2014, the latest date for statistics. The reasons for this decline, however, are not related to an overall cure. That goal has been abandoned once it was discovered that cancer doesn’t behave like one disease but like many. The recent decline has come in bits and pieces at an average rate of around 2 percent a year. Projecting forward, the bottom-line statistic for 2017 was that roughly 1.7 million new cancer diagnoses would be made and 600,000 deaths would be attributed to cancer. In simplest terms, only 1 out of 3 patients would eventually die from their diagnosis. That’s a good baseline for optimism.

Shift in Attitude Toward Cancer

Just as important as new medical advances, however, was a dramatic change in attitude. Consider a 2015 article in The Lancet that begins with a sentence that would have baffled the cancer field a generation ago: “The nature of cancer control is changing, with an increasing emphasis, fueled by public and political demand, on prevention, early diagnosis, and patient experience during and after treatment.”

If you unpack this sentence, it says several important things:

If you look at the broad picture, the main reason for optimism has switched from treatment to prevention. This is a turnaround unforeseen even a decade ago, when hope was overwhelmingly placed on more funding for basic research and new drug treatments. It is now generally agreed that up to 50 percent of cancer cases are preventable using already existing knowledge.

Most people already knew about taking aspirin to reduce the risk of heart attacks and strokes, and so the benefit for cancer is an add-on, not a panacea. In-depth data gathered from a 30-year studyfollowing 130,000 people found that those who regularly took at least two adult aspirin a week had a decrease in gastrointestinal cancer of 20 percent and in colorectal cancer of 25 percent. (Other studies have corroborated the usefulness of aspirin as a cancer prevention measure, but also to decrease the risk of metastases after a tumor has appeared.)

There is no need or evidence for a specific anti-cancer regime. If you eat a whole-foods diet without additives, remain active, keep your weight under control, and add half an aspirin a day to your daily routine, you are in fact preventing cancer. There is an X factor, however, that deserves serious consideration. Cancer probably belongs in the same category as hypertension and heart disease, being disorders that take years or decades to develop before symptoms appear. This incremental creep is associated with two factors: chronic stress and low-grade inflammation. It is also likely that the two are linked.

It’s vital to actually reduce the stress in your life, counter the damaging effects of stress with regular meditation, and consume an anti-inflammatory diet (there are many sources of information for the latter online, such as this one from Harvard Medical School). If current trends continue and even more evidence links cancer to the stress-inflammation axis, measures to reduce stress and counter inflammation may become the very core of cancer prevention—this is already the main thrust of Chopra Center programs.

The second criterion that will make cancer a “normal” disease is turning it into a manageable disease. Public outcry over the pain and suffering caused by cancer treatments has made some oncologists reconsider the customary medical model, which means backing off of the earliest possible detection, following a slow-growing cancer like prostate cancer before making a decision about treatment, and taking the patient’s fears seriously. The fact is that every aged person dies with some malignancy in the body that wasn’t the cause of death. In addition, random anomalous or malignant cells are probably present in almost everyone’s blood stream. There is no cause for panic over these facts.

In your grandparents’ day, the diagnosis of cancer was generally fatal. Today, overall cancer survival is 1 in 3, and if you eliminate stage 4 cancers that received very late detection as well as untreatable lung cancers, that number would look considerably better. The advent of prevention and management will do more than any drug to allay the dread of cancer. In the end, this could prove to be a major advance in its own right.