Why Self Development Does Not Lead To Enlightenment

by Christopher Wallis: Awakening to enlightenment… 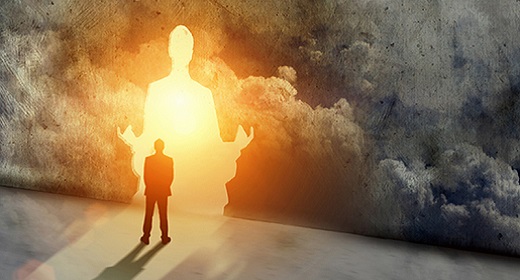 First of all, we should get clear that ‘enlightenment’ is in many ways more of a Western concept than a traditional Asian one. The Sanskrit word bodha means, depending on the context: being awake, knowing, understanding, wisdom, intelligence, perception, awakening, awareness, blossoming, opening, or expanding. It’s an everyday word, not an abstract noun, and it doesn’t imply some final state of perfection.

When used in spiritual contexts, it connotes being awake to and aware of one’s real nat ure, of the true nature of reality, or both. The English word ‘enlightenment’ implies (to most people) some kind of super-wisdom and/or a higher state of consciousness that elevates the one who has attained it above the mass of humanity. The Sanskrit word is sweeter, simpler, and humbler: it connotes waking up to the reality of what you really are (and always have been), and becoming generally more aware and open. Abiding in this awake alive open awareness is the goal of the spiritual life as conceived in the Yoga traditions.

In our culture, however, the pursuit of ‘enlightenment’ (which really means abiding in direct awareness of reality) has become confused and mixed up with the self-help / self-improvement project. People talk about wanting to grow and become a better person, and often imagine that the terminal point of this growth process is something like enlightenment. This demonstrates a real lack of understanding of the nature of the spiritual path (as conceived in the Asian traditions, anyway). Not only is abiding-awakeness not the endpoint of the growth process, it doesn’t even lie in that direction.

Look, if you stop and think this through, you’ll see it’s obvious: according to all the Yoga traditions, your true nature is always already perfect, the core of your being is pure radiant divinity, and you are always already one with the infinite divine Consciousness which gives rise to and supports the entire universe. TAT-TVAM-ASI: you are That, here and now. Therefore, realization of this truth does not depend on any degree of personal growth. Rather, it is a paradigm shift in which you stop identifying with the phenomena within Awareness (e.g., thoughts, emotions, body-image, etc.) and wake up to the fact that you are Awareness itself—the only constant in the ever-changing world of your experience.

And yes, it is possible to become so awake that you never fall back asleep again. You don’t become a categorically different kind of person, you just finally see the truth so clearly and completely that you can’t unsee it, and thus you dwell in a different paradigm from before.

Now, despite fanciful stories about ‘sudden enlightenment’, this doesn’t happen overnight. Just as it can take you a while to wake up from physical sleep before you’re fully awake and clear, in the same way, once you’ve touched into the truth of your Being, you have to keep touching in and deepening your awareness of Awareness for months or years before it becomes your default state. In that process, there is a kind of growth that is necessary: reaching a level of maturity where you know what you really want and your daily-life actions reflect your heart’s deepest longing. In other words, you have to grow up enough to get out of your own way and make room for the awakening process to unfold. But this kind of growth is a necessary ancillary to awakening, not its cause.

So you have to ask yourself: are you subconsciously holding the belief that abiding in awakeness to your real nature has to wait until you’ve completed your therapy, or until your life’s not a mess, or until you can retire to a forest retreat, or until you’ve attained samādhi? Are you spending a lot of time and energy on a self-improvement project that yields only incremental gains, without first accessing the source of unconditional love within? If so, you’re suffering. And you’re not alone.

This is what looks really weird from where I’m sitting: a lot of people doing self-improvement type spirituality are working really hard to acquire the traits that are natural byproducts of abiding in awakeness (bodha-stha). This is going at it back-to-front. First wake up to what you really are, then integrate that realization into all the aspects of your life. Waking up is actually the easy part compared to integration, but way harder than both is trying to integrate a realization you haven’t really had yet. Which is what most people in this game are trying to do.  I know, you’ve had powerful experiences in which you tasted your divine essence; but this is really not the same as properly waking up out of the belief that your thoughts, memories, and story have anything to do with who you really are.

It’s this simple: you cannot heal the ‘broken self’ as long as you believe that you are it. Or you can, but it’s ridiculously difficult. By contrast, if you wake up to and become centered in your real nature, then you can lovingly address any misalignments in the body-mind that need addressing. If you’re willing to do the work of integration, every layer of your being becomes permeated with the powerful energy of awakeness. You start to then embody that awakeness, which is beneficial to all beings. If you don’t do the work of integration, even if you’re centered in your divine core, you’re not really benefitting anyone else.

This is important. Some people wake up to their real nature and then dismiss the body-mind and its problems rather than work with them. This is called ‘transcendentalism’ by my teachers (and ‘spiritual bypassing’ by others), because such people seek to simply transcend the body-mind. By contrast, on the Tantrik path, we seek to allow the energy of pure Awareness (chit-shakti) to permeate all the levels of embodiment and aspects of daily life. This is called integration. But again, in order to do that, you have to be able to access the energy of Awareness at will, which takes practice.

So integration is the real spiritual growth, but it has nothing to do with trying to recondition oneself to conform more closely to an ideal found in books on spirituality or in the mouth of a teacher (which is what most people call spiritual growth). Rather, it means doing whatever is necessary to open up the body-mind system in such a way as to allow the energy of awakeness to flow unimpeded and permeate every aspect of your life (when actualized, this is called mahā-vyāpti, the Great Pervasion, in Tantrik Yoga).

Dwelling in the midst of the sea of nectar, with my heart-mind immersed solely in the worship of You [as the substance of every experience], may I attend to all the common occupations of man, savoring the ineffable in every thing. ~ Utpala Deva

This process of integration-and-embodiment involves a lot of looking. When you hold up a thought or self-image and look at it in the Light of Awareness (again, assuming you have access to that Light), you can clearly see to what degree it is misaligned with your deepest nature and discard it (by definition, they’re all misaligned to some degree; but the less misaligned thoughts can be useful for a particular purpose). For most people, this doesn’t happen automatically; they need to actually do the work of looking & discarding; or, in the case of saṃskāras or unresolved experiences, looking & digesting; this is a crucial distinction. This explains why some people can be ‘enlightened’ but unintegrated; and if they become teachers, they usually cause harm. There’s a difference between having access to the Light of Awareness (prakāsha) and doing the work of seeing what does and doesn’t reflect that light in its fullness (this is called vimarsha, or self-reflection).

Someone who has done a lot of vimarsha and has therefore shed their self-images and digested a lot of their unresolved experiences dwells in a state of freedom called moksha. Such a person is called jīvan-mukta, liberated while still in the body. This is significantly less common than awakening or even abiding-awakening. It is the ultimate goal of the spiritual life, but it’s not an attainment since nothing has been attained; rather, something has been lost. It’s a state of being truly unburdened and free. But even this is not a terminal state, since there’s always more saṃskāras that can be digested and more integration that can be done. Still, there is a tipping point beyond which you could never go back to the state of bondage and delusion. Passing this tipping point is what caused the Buddha to say simply and humbly, kṛtyaṃ kṛtam: that which needed to be done is now done.

What would it look like for you to drop all self-improvement projects based in a sense of unworthiness and spend your practice time learning how to access and abide in your already-perfect innermost Self? This is not as easy as it sounds, since it means going beyond enjoying a feel-good idea of your own divinity and accessing the real deal, which humbles and softens you more than it exalts and affirms you (‘you’ here meaning the body-mind-personality complex).

What if you stopped trying to be a ‘better person’ and simply learned how to fully embody the being you already are?

By speaking to important misunderstandings of the goal and clarifying the nature of the path (according to tradition, my teachers, and my own experience) this post addresses #1 in my list of the Eight Great Pitfalls on the spiritual path: that is, lack of alignment of View, Practice, and Goal. Alignment of these three, by the same token, is #1 in my list of the Eight Keys to sustainable Awakening. I’ll be posting on all Eight going forward (I already posted on #2, Energy Leaks.)

Do you want to understand the awakening process in more detail, avoid a major pitfall, and ensure alignment of View, Practice, and Goal?  In the Trika lineage of Tantrik Yoga, we find an important teaching about three primary phases to the awakening-and-liberation process. In the first phase, you awaken to your divine core or real Self or ‘soul’, then integrate that awakening (which entails shedding a critical mass of what’s not alignment with your ‘soul’).

In the second phase, you awaken to your oneness with the entire universe, your seamless unity with the whole field of energy, then integrate that awakening. In the third phase, you awaken to the formless ground of being, the field of absolute potential ‘beyond’ manifestation (yet permeating it), then integrate that awakening. (To be more accurate, you don’t awaken to the formless ground, it wakes up to itself through you, and ‘you’ dissolve. No more you; only the One.) In Sanskrit, these three phases are called:

When a person intentionally or unintentionally tries to reach phase two before phase one, or phase three before either, the results can be messy. It’s more or less impossible to sustain and integrate phase two or three without stabilizing the prior phase(s), my tradition argues. This explains why so many people who experience unity-consciousness (phase two) or the absolute void (phase three) can’t seem to integrate the experience in a sustainable or healthy way. It’s crucial to be stabilized in your absolute center (phase one, ‘Soul Immersion’) if you want to actualize phase two or three in a sustainable manner. (Not that it’s about ‘wanting’ it; you’re either called further or you’re not.)