by Lloyd Alter:And the drivers don’t like it one bit, but it is the only way to deal with congestion… 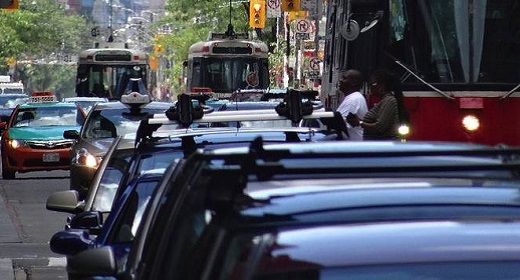 In Toronto, the new King Street pilot is, according to the Star, a huge success; more people are riding, travel times are down 20 percent. But to some, like Mayor Rob Ford’s former chief of staff, people who don’t drive to work are just cyclists and our new favourite term, streetcar urchins.’

But in fact, cycling is not a dismal failure in London or New York. Will Norman writes in the Guardian about the London experience, where bikes and transit are being developed to reduce congestion, not increase it:

Everyone has their opinion on what causes congestion, many of which are conflicting. The causes are complex, but 75% of congestion is caused simply by there being too great a demand for our limited street space. Or, without the jargon: too many motor vehicles and too few people in them. To solve the problem, the report recommends that the mayor should prioritise the efficient use of our roads, saying that the “most space-efficient means of moving people – walking, cycling and public transport – should be prioritised over low-occupancy private transport.”

Norman notes that adding bike highways increased the number of people being moved by 5 percent, just a week after opening, and that the number of people cycling instead of driving or taking public transport went up by 50 percent. And to Mark Towhey’s comments about deliveries:

What the new report affirms is that being pro-cycling is being pro-business. We are not building cycle lanes just because they look nice. We are building them to keep London moving. We are building them to accommodate the massive growth the city will experience over the coming decades. And by shifting as many people as possible to walking, cycling and public transport we free up road space and reduce congestion, saving wasted time and money for London’s businesses.

Meanwhile in New York City, just yesterday the Times covered the changes on what was know as the Boulevard of Death — Queens Boulevard — where 186 people, mostly pedestrians, died since 1990. It was rebuilt to be narrower and slower and with bike lanes, and the death rate since 2014 has dropped to a big fat zero.

City transportation officials have invested $4 million to redesign the boulevard, including putting in bike lanes and more crosswalks and places for pedestrians to wait in the median while crossing, and redesigned car lanes to reduce conflicts between local and through traffic. They added cameras to catch speeding drivers near two schools.

And of course, people complain.

Some residents have complained that the redesign of the boulevard has increased congestion by slowing down traffic and bringing more bicyclists who do not heed pedestrians. They also said that the bike lanes take away parking and make it more difficult for deliveries.

But as the Mayor notes, “Queens Boulevard is the ultimate example of what was wrong in this city for decades. I love my city but something was broken that we had a street called the Boulevard of Death and we accepted that.”

In Toronto, London and New York, cycling is not a dismal failure. Projects like King Street or cycle superhighways do not cause congestion but in fact move more people than cars did. People who drive may not like it, but our successful cities are getting too crowded to have them filled with metal boxes with single passengers.