Lab-Grown Meat Is On The Way

by Paul Shapiro It’s good for the planet, and surveys show that significant numbers of people would be willing to give it a try… 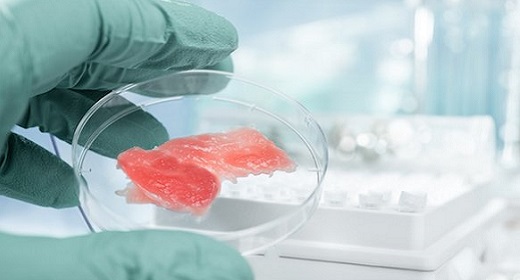 It used to be limited to sci-fi fantasies and futurist predictions: one day, went the story, humanity would discover how to divorce meat production from livestock-raising and simply grow meat without the need for the massive resources it takes to raise farm animals.

As early as 1894, then-famed French chemist Pierre-Eugène-Marcellin Berthelot claimed that by 2000, humans would dine on meat grown in a lab rather than from once-living animals. Winston Churchill made a similar prediction in 1931, and the idea became even more popular when Commander Riker revealed to an alien on Star Trek: The Next Generationthat the meat humans consume on the USS Enterprise was grown rather than slaughtered.

Today, these science fiction dreams are starting to become science fact. Actually, it was NASA that led the way to making it so, funding successful research 20 years ago that explored whether long-term astronauts could grow meat—since they of course won’t be hauling Noah’s Ark in tow. But it turns out that while it will be a long time before we set off for long-distance cosmic tourism, the technology to create “clean meat” is needed here on Earth far more than it is in outer space.

A handful of start-ups are now taking what have solely been medical technologies and applying them to growing animal-agricultural products like meat, milk, eggs and leather. Because these foods require so many fewer resources to produce than raising whole animals, this nascent field of cellular agriculture could do to our present day system of industrial animal agriculture what clean energy is beginning to do to fossil fuels.

And the comparison is apt. According to the United Nations, raising animals for food contributes more greenhouse gas emissions than all forms of transportation combined. The climate impact of animal agriculture is staggering, as are the other environmental problems associated with it. “The reality is that it takes massive amounts of land, water, fertilizer, oil and other resources to produce meat,” says global relief charity Oxfam, “significantly more than it requires to grow other nutritious and delicious kinds of food.”

So, how do these companies grow clean meat? In a very small nutshell, they take a miniscule biopsy of skeletal muscle (the kind of meat we eat today), isolate some satellite cells—precursors to such skeletal muscle—and start culturing them. Under conditions that approximate what happens inside the animal’s body, the cells begin dividing, and with the power of exponential growth, pretty soon you’ve got actual muscle, grown from the very same cells that would grow muscle in the animal. (The process of growing certain liquid animal products like milk and egg whites is much different, and much easier.) So far, these clean meat companies are producing only ground meat—hot dogs, hamburgers, chicken nuggets and so on—but they expect to commercialize their products within years, not decades.

Having now eaten their clean beef, fish, duck, liver, yogurt and more, I can attest that yes, they taste great and I suspect many—even if not all—consumers will be eager to try them as soon as they can, too. After all, in addition to being more sustainable and humane, these meats will also have far fewer food safety problems, as they’re free from the intestinal pathogens like E. coli that plague meat production today.

In some ways, these entrepreneurs are delivering to us what Dr. Uma Valeti, CEO of the clean meat start-up Memphis Meats, calls the “second domestication.” In the first domestication, thousands of years ago, humans began selectively breeding animals and planting seeds, exerting more control over how we obtained food. Today, Valeti’s company—which agriculture giant Cargill has already invested in—is taking that control down to the cellular level. Whereas our ancestors domesticated wild animals into livestock, today Memphis Meats and others are beginning to domesticate those animals’ cells. And from one single cell of a cow, you could feed an entire village, offering real hope that we may be able to satiate humanity’s demand for meat without destroying our planet in the process.

Yes, we already have plant-based meats that are improving in taste and texture every year. Yet just as the problem of fossil fuels is so severe that we need multiple alternatives (wind, solar, geothermal and more), the problem of factory farming is also so serious that we need more than one solution. Plant-based meats are fantastic, as is simply eating a plant-based diet. But clean meat is another promising alternative to the factory farming of animals that deserves our support.

The history of agriculture has largely been about producing more food with fewer resources. Today, cellular agriculture is offering us the capacity to do just that while lightening our footprint on the planet in ways that in the past was always mere science fiction.

Perhaps it was put best by Drew Endy, a Stanford University synthetic biologist, who says of these kinds of technologies: “We can transition from living on Earth to living with Earth.”