What is God? – Daya Mata

by Daya Mata: Many questions arise in the minds of those who think about God: What is God? What is the soul? What is Truth? 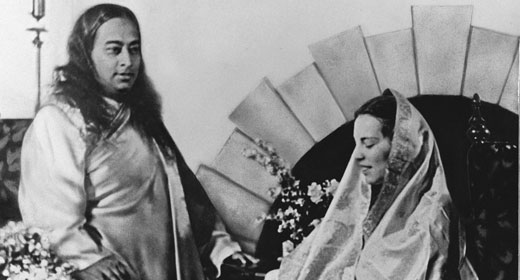 First let us consider the question, “What is God?” No one has ever been able fully to describe Him. But those who have tasted the divine nectar of His presence have been able to tell something of what they experience when they commune with Him. One scriptural description of the Infinite is that He is:

Ever-existing (Sat) means that He is eternal;

ever-conscious (Chit) means He is always conscious of His eternal existence; and

ever-new Bliss (Ananda) means that He is a joy that never grows stale. Every human being is seeking that kind of experience.

The scriptures also tell us that there are certain manifestations of God that are experienced as one draws close to Him. God is love, bliss, wisdom, peace, light, and the great cosmic sound of Aum or Amen. (Aum: the universal symbol-word for God. Aum may be heard through practice of Self-Realization Fellowship methods of meditation.)

All scriptures refer to the devotee’s experiencing these aspects when communing with the Divine Beloved. “Well,” we may ask, “if this is what God is, then what is the soul?” The definition Gurudeva Paramahansa Yogananda gave is that the soul is individualized ever-existing, ever-conscious, ever-new Bliss. As the tiniest drop of water from the ocean is a minute part of the ocean itself, it contains all the qualities of the ocean, without exception. So, in the same way, this atman, the soul, contains all the qualities of the Divine.

Unconsciously man knows he is divine. But consciously he has forgotten his true nature. The five senses were given to man that he might cognize this world, and through his experiences here, grow in understanding. But when he abuses the senses, he becomes engrossed in sensuality and loses knowledge of his infinite nature. Yet that nature continues subtly to manifest itself in pseudo-ways.

For example, every human being seeks power; many crave it. This is natural, because the soul knows it is all-powerful. But since in the ordinary conscious state the soul is not aware of its limitless nature, it strives instead for positions of authority or superiority or to gain control over other people, or even over nations. The ideal of being all-powerful is not wrong, but too often the method of attaining and using that power is wrong. Those who know God understand and rightly use the tremendous power that lies within the soul—the power that can move hearts, that can move nations, that through the centuries has changed lives.

Another way in which man’s hidden divine nature expresses itself is through his craving for material wealth. The soul knows that in its oneness with God it is the possessor of all things, and that it has the power to create at will whatever it needs. But because we are not consciously aware of our soul’s potential, we begin instead to accumulate material things in an effort to satisfy our buried conviction that everything we need or want is ours by divine birthright.

Man also craves bliss. The soul knows it is blissful, but because the ego is ignorant of that bliss, it succumbs to the temptations of pseudo-joys provided by maya (Cosmic delusion).
Through the ages, man has used intoxicants such as wine and drugs in an effort to forget this world, because subconsciously he remembers a more blissful one. Isn’t it so? That goal is not wrong, either, because man, being made in the image of God, whose nature is bliss, automatically longs for that unalloyed joy. But not knowing how to regain it, he resorts to the pseudo-joy of intoxication. He drinks or takes drugs so that for at least a little while he can forget this world. The tragedy is that when his body becomes saturated with these intoxicants, they destroy his nerves and brain.

Man also seeks love, an unconscious response to the nature of his soul, which itself is love. But because he does not consciously experience that pure, all-satisfying divine love, he goes around like a beggar, pleading for a little affection from human hearts. It is not wrong to crave love, but the means by which most people seek it is ill-conceived. As often as man thinks he has found perfect love in human relationships, he finds instead that death, or unfaithfulness or some other failing, has left him disappointed and disillusioned. As Gurudeva used to say to us, “Behind every rosebush of pleasure there is a rattlesnake of disillusionment.” Tis true!

There is also a craving in man for unity. Everything in this world is trying to come together. The law of attraction operates in even the most infinitesimal particles of matter. If you look through a microscope, you will see this power at work in many natural phenomena. Man also is always striving for the harmony of oneness. His soul knows that it and all other souls are essentially one with God. But because man identifies himself with this fleshly form, he has forgotten that oneness, so he seeks union with one soul after another in various relationships, trying always to find the lost sense of fulfillment that comes from unity.

So, we see that the goals of man are not wrong, only the manner by which he strives to achieve them. He has forgotten that he is not this body that he is the all-perfect formless soul. He remembers only this flesh, and so strives unsuccessfully through the limited five senses to regain that which is already his.

Why should man seek God? Because, as Krishna taught, so long as we are identified with a mortal body, so long will we be subject to suffering. This finite world and everything in it is based upon the law of duality. When the One became many, in that instant He imposed a dual nature upon creation: You cannot know pleasure without knowing pain; you cannot know happiness without knowing sorrow; you cannot know life without knowing death; you cannot know human love without knowing hatred, and so forth. So long as we are tossed about on the waves of duality, we shall suffer—one moment joyous, the next sorrowful; one moment our body is filled with life and vigor, the next it is as dead as a piece of clay. Is the sole purpose of life to be born in these little forms, to grow up, gain a little knowledge with which to deal with this world, marry, beget children, grow old, fall sick, and die? No! The purpose of life—the only purpose—is to know that we are made in the image of God. Knowing this, we realize our true nature, which is ever blissful — ever-existing, ever-conscious, ever-new Bliss.

It is said that before we come to the state of evolution of birth in human form, we have passed eight million incarnations in lesser life-forms. And then as human beings we come on earth again and again, until we have satisfied all the desires that require mortal experiences; and until we have arrived at that state wherein we know our immortal oneness with God.

How, then, can we regain our lost or forgotten divine consciousness? This is what Yoga teaches, and every scripture says the same thing:

That is where God and Self-realization are to be found. Withdraw from this finite world and penetrate deep within the recesses of your soul. There you will realize the ultimate achievement that is the unconscious goal of every human being.

I speak from my own experience, and from what I witnessed during twenty-one years at the feet of our blessed Gurudeva. How often we saw him in ecstasy, as the state of God-communion is known in the Western world — or samadhi, as it is known here in India. That state no words can fully describe.